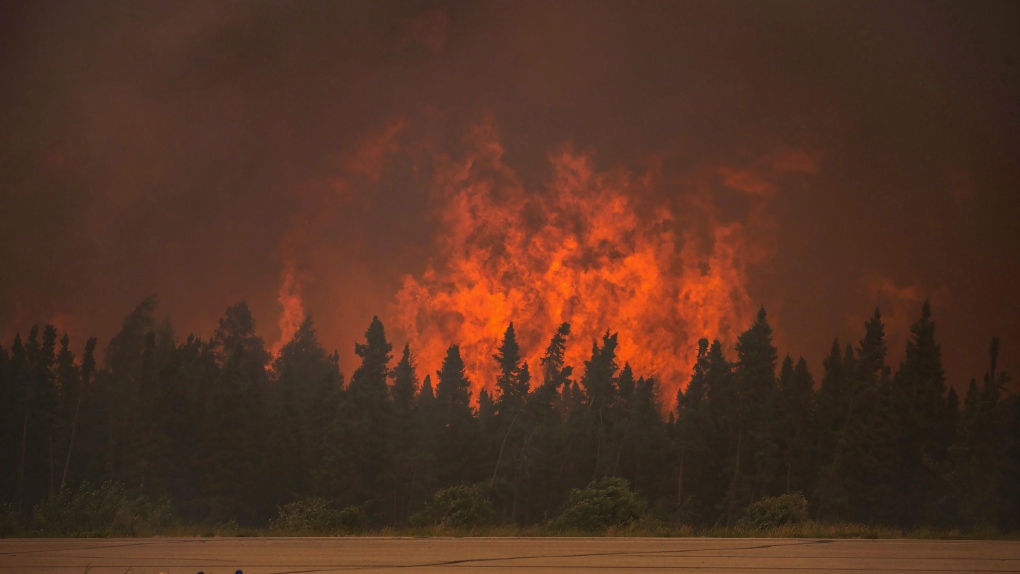 In this July 5, 2015 file photo, flames rise from a wildfire near La Ronge, Saskatchewan. THE CANADIAN PRESS/ HO-Corey Hardcastle/Ministry of the Environment/Government of Saskatchewan

Federal wildfire researchers say most regions in Canada could be facing a long, hot, fiery summer.

Wildfire starts and the amount of land burned were below average for the first few weeks of the season, but dry weather is turning things around, said Richard Carr, a fire research analyst with Natural Resources Canada.

"We've had a long, lingering winter and a bit of a slow start to the fire season, but the numbers are higher than the same time last year."

Across the country, wildfire starts have been above average since the end of April. On the national fire danger map, the risk in almost all of the three most westerly provinces is rated at least high. Saskatchewan shows as almost entirely extreme.

Two provinces have already had their first evacuations of the year. About 40 people in Crutwell, Sask., have had to flee their homes at least twice. Seven families in Lac du Bonnet, Man., also had to leave.

Manitoba has counted 119 fires so far. Last year at this time, the figure was 27 and the year before that it was 58.

Nationally, the Canadian Interagency Forest Fire Centre says Canada is about 100 fires ahead of the 10-year average for early May.

Although some parts of the country are flooding, much of the forested area remains dry, said Carr.

"It's pretty dry across that whole stretch, right from British Columbia to western Ontario."

Ontario has banned open fires in its northwest and Alberta has posted bans in many parks and municipalities. A ban in Saskatchewan covers Crown land in provincial parks, except in the Cypress Hills.

The Alberta government produces a map that displays how dry forests are. Almost the entire forested region of the province rates at least 89 out of 100.

More worrisome are Environment Canada's weather predictions for the summer. Although precipitation is difficult to predict and some rainy relief is expected by July, Carr said the data suggests it will mostly be hot and dry.

"If we get rain during that time, we might go into a lull and have a normal summer. But if it stays dry -- and it looks like there's a chance that it might -- we might be a busier season.

"A number of models are predicting a warm summer across North America. That's really increased."

Canada has about 8,000 wildfires every year that burn an average 21,000 square kilometres of forest. The amount burned varies widely from year to year, but federal statistics suggest that figure has been rising for the last several years.

Scientists theorize that increased wildfires will be one of the main effects of climate change as hotter weather and less predictable precipitation creates more volatile forests.

Fire conditions are tough to predict. Heavy rains, lightning strikes or gusting winds can change everything.

But Carr said conditions are lining up for a difficult summer.

"It is picking up pace now."