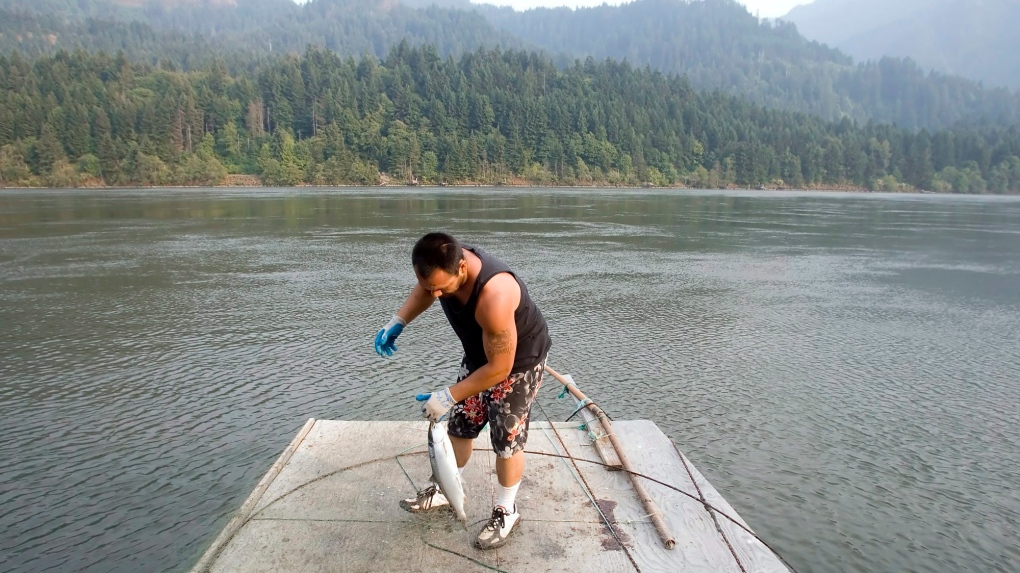 FILE - In this June 30, 2008, file photo, Will Zack pulls a sockeye salmon from a hoop net on his family's fishing scaffold on the Columbia River just east of the Bonneville Dam near Skamania, Wash. (Gordon King/Yakima Herald-Republic via AP)

VANCOUVER -- A British Columbia First Nation has lost a bid for a larger allocation of the scarce Fraser River sockeye salmon fishery.

The Squamish First Nation opposed a decision by Fisheries and Oceans Canada in 2014 that raised its sockeye catch from 20,000 to 30,000 fish, and also increased allotments of chum and pink salmon.

The First Nation filed an application for a judicial review after federal officials rejected its request for 70,000 sockeye for food, social and ceremonial purposes.

In a judgement posted Wednesday, Federal Court Judge Ann Marie McDonald dismisses the application, ruling the department's regional director general of the Pacific region "made a reasonable decision in a procedurally fair manner which respected any constitutional limits on her discretion."

The First Nation claimed its allocation of approximately five sockeye per person was far below the 48 allotted to some other Indigenous groups and was insufficient for community needs.

The 27-page ruling finds the Squamish Nation failed to show how the amount was inadequate and "did not address why other fish cannot satisfy the food needs of the community."

The sockeye is considered a prized catch for rich flavour and firm flesh.

The Squamish argued in its petition that fisheries officials didn't explain why some groups with smaller populations received higher allocations of sockeye and also failed to consider the historical and ceremonial preference of the Squamish Nation for sockeye salmon.

McDonald says in her ruling that the nation's allocation is both higher and lower than the more than 100 Aboriginal groups seeking a share of Fraser River sockeye, in part because fisheries officials had to make some difficult decisions.

"Moreover, the (department) had to take into account some Aboriginal groups who have limited access to any fish beyond sockeye. Here, the Squamish Nation has access to a number of different fish species," McDonald says.

She also sympathized with fisheries officials, referring to the department's assertion that "nearly every single First Nation who has access (to) Fraser sockeye has expressed to DFO that they have a preference for Fraser sockeye over other salmon species."

McDonald says the balance in the decision between the preferences of all Aboriginal user groups "does not render the decision unreasonable."

Fisheries and Oceans Canada said last September that only 1.5 million sockeye had returned to the Fraser River, well below the 4.4 million predicted.

The unexpected collapse of the Fraser River sockeye fishery in 2009 prompted a federal investigation led by Former B.C. Supreme Court justice Bruce Cohen, who made 75 suggestions for change.

Fisheries and Oceans Canada said it had acted on 64 of the recommendations by last fall.