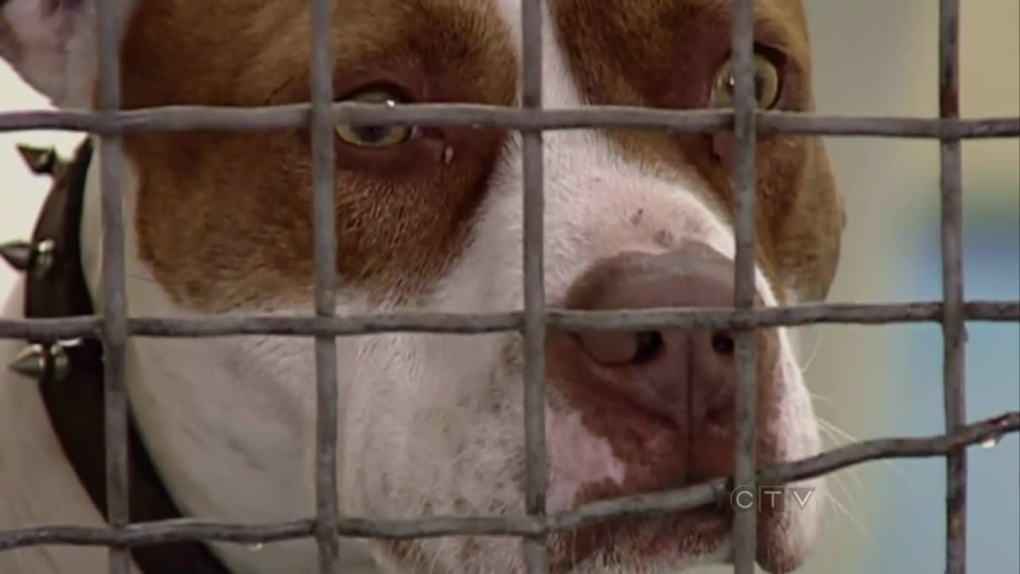 file photo of a pitbull or mix dog

MONTREAL -- A Quebec father could face jail time after leaving his toddler son at home with a dog known to be aggressive and without proper supervision.

The man faces sentencing next month after being found guilty by a provincial court judge for criminal negligence causing bodily harm in the September 2016 attack.

According to the judgment, rendered in late April, the father had left his son in the care of a brother who suffers from Tourette syndrome and a mild intellectual deficiency, incapable of living alone or working.

The boy's grandfather -- the dog's owner -- was unaware the youngster was inside the home, and was feeding a disabled daughter.

The judge did not identify the dog's breed in her ruling but previous reports had identified it as pit bull.

While his guardian was focused on his cell phone, the young boy ran into the kitchen where the dog was in a broken cage and was bitten above the eye.

The judge wrote the dog's dangerous nature was well-known to the family.

The dog had bitten kids and another dog previously and was muzzled at times after that. It was put down in the weeks following the attack on the boy.

Quebec Court Judge Nathalie Duchesneau ruled that a responsible parent should have been able to assess the uncle's inability to care for the boy, especially with a dangerous dog present.

"Perfection is certainly not required, but the specific decision to leave a helpless two-year-old child to an intellectually limited person, combined, once again, with the presence of ... a dangerous dog nearby was a blatant disregard of a totally predictable potential danger," Duchesneau wrote.

She rejected the accused's defence that it was an accident, saying the evidence showed a reckless indifference for the boy's safety.

The judge asked whether a reasonably prudent parent, knowing the dog's history, put in similar circumstances and knowing the risks would have understood the danger and taken necessary precautions.

"In short, the accused did not ... behave as would be expected of a reasonably prudent person in such a situation," the judge wrote.

The boy's mother told the court the boy doesn't have lasting after-effects and his scars have since healed.

The accused's name is subject to a publication ban to protect his son's identity.

He was found guilty of both criminal negligence and failing to provide the necessities of life, but the latter charge was stayed.

The case returns to court for a sentencing hearing on June 3, according to the docket.