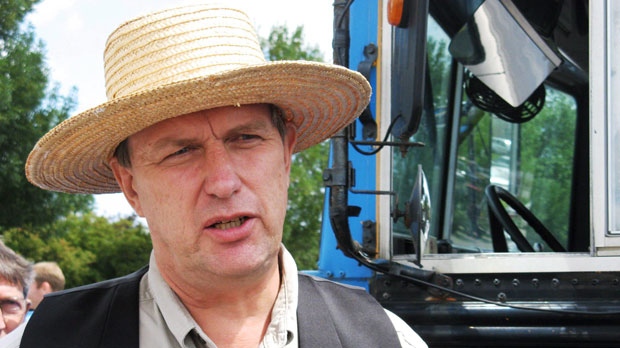 TORONTO -- A dairy farmer determined to defend his right to provide raw milk urged Ontario's top court Wednesday to recognize that laws around pasteurization were outdated, unjust and infringed on basic freedoms.

Michael Schmidt made his stand during a hearing before Ontario's Court of Appeal, as supporters packed two courtrooms to witness the latest step in a long-running legal battle between the 59-year-old farmer and the government.

"The law needs to evolve and the pasteurization law seems not to evolve," he said. "Is the Charter of Rights and Freedoms really living in this country or are we fighting a losing battle."

But Schmidt has repeatedly said he believes raw milk is not only safe, but offers health benefits as well. The government's ban on its sale and distribution, he argued, is an infringement of fundamental freedoms.

"I'm not asking at all that everybody has to drink raw milk," he said. "The government is saying that everyone has to drink pasteurized milk and that is, I think, a severe problem in this legislation. We are getting force-fed something people don't want."

The farmer from the Ontario municipality of West Grey was originally charged in 1994, and later convicted, of selling or distributing unpasteurized milk.

It's not illegal for farmers to drink raw milk from their own cows, so a few years later Schmidt devised a so-called "cow share" program, through which his approximately 150 customers bought ownership in a cow or herd.

Schmidt believes the program is legal under a concept known as agistment, where he cares for livestock owned by other people, who are then entitled to that animal's products.

But the Crown argues Schmidt is still the one with legal title to the cows, as there is no evidence his customers "enjoy the benefit" of ownership except for a right to consume milk and cheese products for a fee.

As a result, Schmidt is still illegally distributing raw milk, the Crown says.

A provincial court judge convicted Schmidt in 2011 of 13 charges under the Health Protection and Promotion Act and the Milk Act and fined him $9,150. That decision overturned an earlier one, in which another judge had acquitted Schmidt.

Schdmit's lawyer made two major arguments at his appeal Wednesday -- the first made a case that cow shares are not illegal while the second pointed out that the Charter of Rights includes "the right of individuals to make decisions pertaining to their own bodies and their own health."

"Schmidt and consumers of raw milk are freely choosing to ingest raw milk to improve their health," Schmidt's lawyer Derek From said outside court. "Our ultimate goal is to have cow shares recognized as legal in Canada."

Ontario's lawyers countered that the law infringes neither Schmidt's nor his customers' charter rights.

"The private cow share agreement is not in fact a private agreement at all," she told the court. "There are very serious public ramifications...I can choose not to consume raw milk but can nevertheless contract an illness."

Experts had testified for the Crown at Schmidt's trial that raw milk is a known source of food-borne illnesses to which pregnant women, elderly people and others with compromised immune systems are particularly vulnerable.

Schdmit's lawyer pointed out, however, that if raw milk were significantly dangerous, its consumption would clearly be banned altogether.

"Unpasteurized milk has not been banned and if it is inherently unsafe in all circumstances, it would have been banned," he said.

Rather than allowing a "black market" of raw milk to proliferate by upholding the ban on its sale, Schmidt's lawyer asked the court to deliver a ruling which would support regulation of unpasteurized milk.

He also pointed out that some items with known health risks, like cigarettes, were allowed to be sold.

"We have scientific evidence that smoking kills you," he said. "With raw milk, there are no bodies...the standard that government is applying in this legislation is not rational."

The laws around pasteurization were too broad, said Schmidt's lawyer, suggesting that under such a sweeping interpretation of "distribution" it would be illegal for one co-owner of a cow to hand a glass of milk to another co-owner.

The Crown argued that Schmidt would be found guilty even under the most restrictive interpretation of the law.

The panel of judges who heard Schmidt's appeal will deliver their decision at a later date.