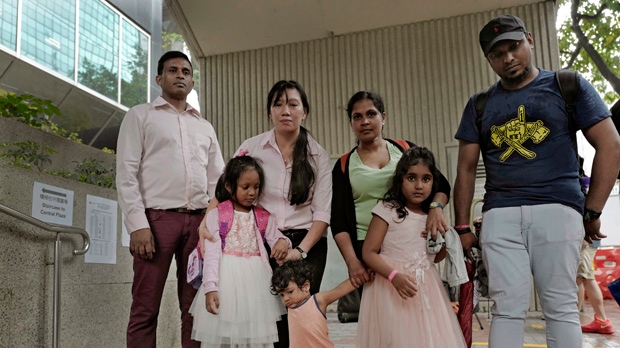 MONTREAL - The families who sheltered U.S. fugitive Edward Snowden in Hong Kong need to be brought to Canada immediately while the country processes their asylum claims, their lawyers said Monday.

The seven people - four adults and their three children - allegedly helped hide Snowden when the fugitive was in the region in 2013 after he leaked documents revealing extensive U.S. government surveillance.

Speaking from Hong Kong through a video conference, surrounded by the seven refugee applicants, Tibbo told reporters they have two weeks to appeal the decision or risk deportation to their countries of origin, Sri Lanka and the Philippines, where they fear for their safety.

A non-profit group is attempting to raise the estimated $15,000 to cover the appeals.

There is little chance their appeals will be successful, however, Tibbo said.

"The solution is Canada," he said, adding the country is one of a handful of jurisdictions that permit a review of refugee applications from people who haven't been screened by the United Nations.

Michael Simkin, part of the families' legal team, said in Montreal his clients' file could be handled "within days" in Canada if the government wanted to.

"More importantly, if they were willing they could bring the families to Canada as an exceptional measure" while their claims are processed, he said. "It has been done before and can be done again."

The families' lawyers say the Hong Kong government rejected their applications because it believes the Philippines and Sri Lanka are able to protect them.

One of the refugee applicants, Ajith, said he is convinced he will be killed if he returns to Sri Lanka.

Tibbo said he has "no regrets" about his decision to introduce the families to Snowden.

"They made fully informed decisions but at the same time I feel a moral responsibility," he said. "With Mr. Snowden moving on from Hong Kong it is my view my clients shouldn't be left behind."

All four adults told reporters via video conference that they had no regrets sheltering Snowden.

Snowden remains in exile in Russia. The United States has charged him with violating the Espionage Act and theft of government property, and he could face up to 30 years in prison if convicted.