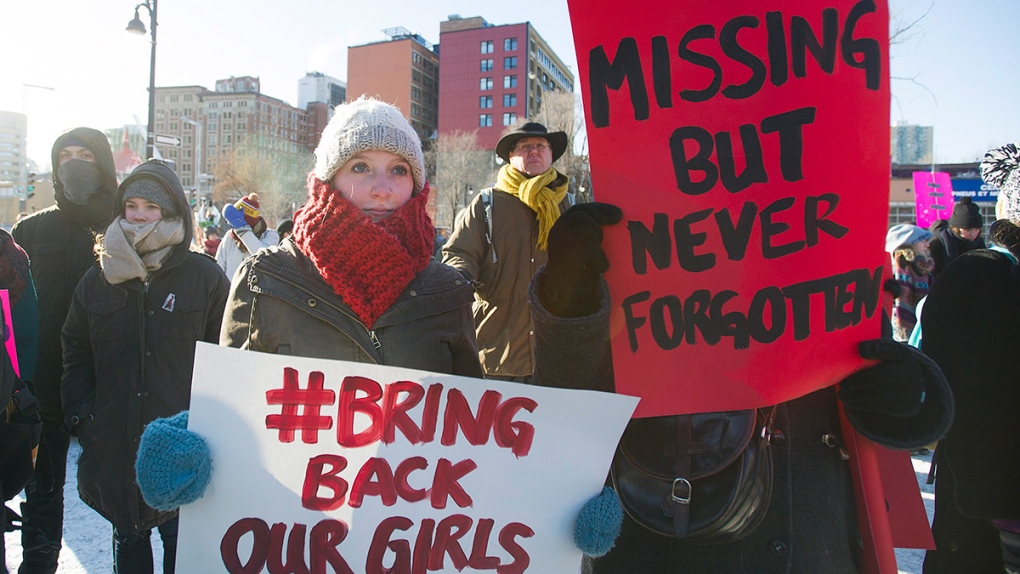 People hold up signs as they participate in the 7th annual memorial march to raise awareness for the hundreds of missing and murdered aboriginal women in Montreal, Sunday, Feb. 14, 2016. (Graham Hughes / THE CANADIAN PRESS)

OTTAWA -- The families of missing and murdered indigenous women and girls say they are anxiously awaiting more details about the programs and services they were promised to help them navigate the justice system.

When the Liberal government unveiled the details of the national inquiry into missing and murdered indigenous women, the Justice Department also said it would devote $11.7 million over three years for provinces and territories to establish family information liaison units within their existing victims services departments.

The units are meant to complement the work of the inquiry by supporting families seeking information about their loved ones from government institutions -- including police, prosecutors, coroners and child protection services.

More than two months later, however, the provinces and territories are at various stages of setting up the units -- some are still exploring whether they will have one, while all but Ontario are unable to provide any firm timelines.

That's left advocates and the families of victims waiting for answers about how they can access them and how they will work.

"I don't think a lot of the families are aware, actually, of what that money does and I think that's part of the problem," said Beverley Jacobs, a lawyer and advocate for families.

Jacobs said many families have concerns about the units being set up within existing victims services programs and would prefer to see the money go to indigenous community organizations that have already been supporting families.

That is also the view of Darlene Okemaysim-Sicotte, of Iskwewuk E-wichiwitochik (Women Walking Together), a grassroots organization based in Saskatoon that provides direct support to families unavailable through mainstream victims services.

She said she would expect organizations like her to continue to have to act as a mediator between families and these new units anyway.

"Aboriginal families want to be cared for and listened to by their aboriginal peers and support systems," said Okemaysim-Sicotte, whose cousin, Shelley Napope, was 16 years old when she was murdered by serial killer John Martin Crawford in 1992.

"It could be just another bureaucracy that people have to learn."

Angela Marie MacDougall, executive director of Vancouver-based Battered Women's Support Services, said the systemic discrimination faced by indigenous women has also existed in the organizations that provide services for victims and their loved ones.

"Even though I think there has been a real effort for community-based victims services to address violence against women in general, we are all really stratified in Canada, in terms of where indigenous women land."

Justice Canada spokesman Ian McLeod said the funding for the family information liaison units is being directed to the provinces and territories because most of the information families are seeking is held by government institutions, which existing victims services are able to access, while at the same time being regulated by privacy legislation and accountability frameworks.

"Nonetheless, Justice Canada is encouraging the provinces and territories to explore options for partnering with indigenous community or advocacy organizations," McLeod wrote.

He said it will be up to the provinces and territories where the units are located, how many there are and exactly how they will operate, but the department is promoting "promising practices" as they help directors of victims services prepare their applications.

They also expect all units -- and the staff they hire -- to be able to provide services that are both culturally responsive and sensitive to the needs of families experiencing trauma, as well as be able to direct families to elders, cultural advisers and other related resources.

McLeod also noted the announcement came with an additional $4.5 million to support victims services projects giving direct help to the families of missing or murdered indigenous women and girls.