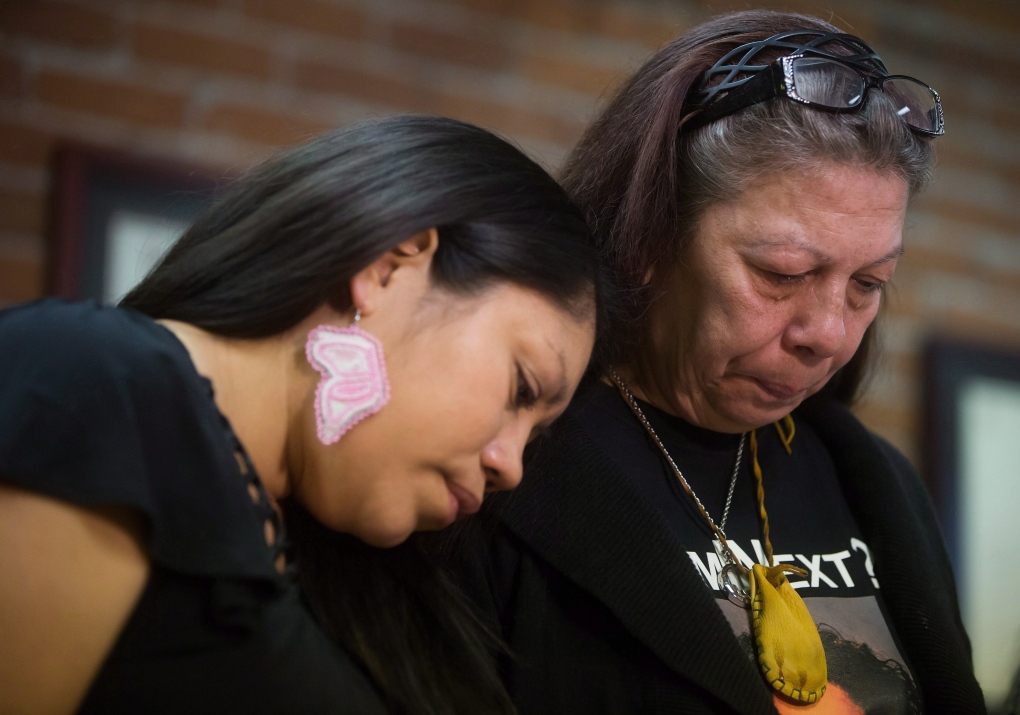 Michele Pineault, right, is comforted by Lorelei Williams during a prayer for Pineault's daughter Stephanie Lane, whose remains were found on serial killer Robert Pickton's farm, during a news conference in Vancouver, B.C., on Wednesday January 28, 2015. (Darryl Dyck/THE CANADIAN PRESS)

WINNIPEG -- Lorelei Williams left the first roundtable on missing and murdered indigenous women in tears after family members who had lost loved ones fought to be one of four people allowed to speak.

The British Columbia woman, whose aunt disappeared in 1978 and whose cousin's remains were found on the farm of convicted killer Robert Pickton, says she felt revictimized by the experience.

Williams hopes it will be different when premiers, federal and provincial ministers gather again for a second roundtable in Winnipeg. Leaders need to listen more carefully to voices like hers and do what they can to address the issue in their own jurisdictions, she says.

"Once they get to know the families and what it does to them, I feel like (they) can fight a better battle," she said Tuesday. "There is a lot of racism that has flawed cases and that needs to be addressed."

Beverley Jacobs, whose cousin was killed in 2008, was one of the four people who spoke at the first roundtable. She said the experience was horrible.

She isn't attending this roundtable, but said she hopes provincial leaders use it to look at addressing poverty, affordable housing, community safety and the disproportionate number of indigenous children in care.

The roundtable begins Wednesday with a day-long, closed-door session for families only. It's to be followed by two days of meetings with premiers, ministers, indigenous leaders and families.

A lot has changed since the last roundtable a year ago when calls for a national inquiry loomed large. The Conservatives, who steadfastly refused to call one, lost the fall federal election to the Liberals, who have promised to convene one this year.

National Chief Perry Bellegarde with the Assembly of First Nations said a national inquiry is only one part of the solution.

"There's still action items that provinces and big cities can also look at," Bellegarde said. "You can't just rely on the federal government to do this."

Ontario Premier Kathleen Wynne said her government is going beyond the inquiry to address violence against indigenous women.

She announced Tuesday that her government is spending $100 million over the next three years on a long-term anti-violence strategy, most of it to support indigenous families. She said she hopes the roundtable will result in concrete actions, including a co-ordinated public awareness campaign.

"The national inquiry is important ... but it cannot be used as an excuse for not taking action," said Wynne, who is attending the roundtable.

Manitoba Premier Greg Selinger said the provinces each have a list of projects to be discussed and prioritized. They include engaging indigenous men in anti-violence campaigns and improving access to emergency shelters.

"There is quite a bit of motivation in the room to follow up on these things."

For federal ministers, the roundtable is a chance to consult provincial leaders about the inquiry. Federal Justice Minister Jody Wilson-Raybould has toured the country to hear from family members about what the inquiry should look like. She said she hopes the roundtable will be a chance to get the provinces and territories on board.

"It's going to be a good discussion. I'm looking forward to it."

Indigenous Affairs Minister Carolyn Bennett said she hopes to get ideas on what action can be taken immediately.

"There obviously are some things we could be doing together right now," she said. "There is optimism from the families, but also the provinces and territories, that we're finally going to get to work together with the federal government on a real plan."