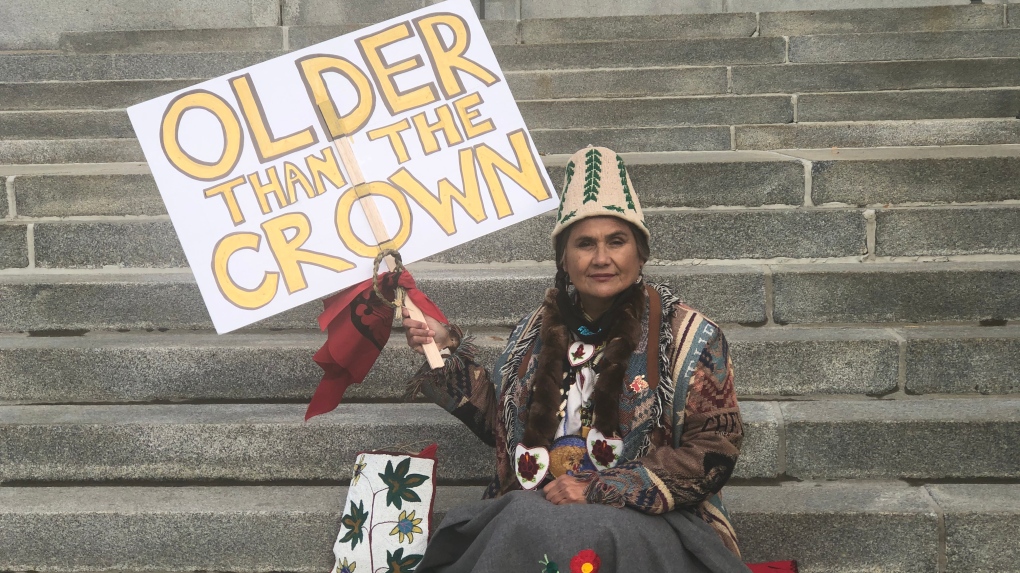 Shelly Boyd, a descendant of the Sinixt, waits on the steps outside the Supreme Court of Canada on Oct. 8, 2020.

TORONTO -- A First Nations tribe that was formally declared extinct in Canada could soon have that declaration reversed by the Supreme Court after more than half a century, a landmark decision that could pave the way for other Indigenous groups straddling the U.S. border to claim legal rights in Canada.

The Supreme Court of Canada is considering the case of the Sinixt, a group of people who lived for centuries on land stretching from British Columbia to Washington state. When European settlers arrived in the 1800s, the Sinixt were forced to move south, though a smaller group stayed in Canada and became known as the Arrow Lakes Band.

Over time, the population of the Arrow Lakes Band north of the border dwindled. In 1956, the tribe was declared legally extinct by the Canadian government after the last registered member died.

But the Sinixt aren’t extinct. More than 3,000 members live in the United States, and genealogical research presented in court has dug up descendants of the Sinixt who live in Canada but are registered to other bands.

Even so, the group had no legal rights in Canada after being wiped from the official list of registered bands.

While the Sinixt are the only group to be formally declared extinct by the federal government, other Indigenous groups, such as the Beothuk people of Newfoundland, have long been described as extinct.

Nancy Michel, a descendent of the Sinixt, lives on the shores of the Columbia River in the U.S., about 80 kilometres from the Canadian border. She said the feeling of being displaced from her ancestors' territory is deeply linked to her identity.

“I get pretty emotional when I start talking about this stuff because I’ve been dealing with it all my life,” she said.

An advocate for the Sinixt for years, Michel has travelled north of the border to Canada to visit her ancestral lands.

“You get a real strong feeling when you’re up there, it’s something that I can’t explain,” she said. “You just feel like you went home.”

The Supreme Court heard its final day of arguments on the case last week and is expected to make a ruling in the coming months. Lawyer Mark Underhill, who has successfully argued the validity of Sinixt people’s identity in lower courts, says he feels optimistic that Canada’s top court will settle the matter once and for all.

“The Crown is trying to erase that Indigenous identity and say, ‘You don’t have rights to practice your culture in Canada because you’re now Americans,’” Underhill told CTVNews.ca on Wednesday.

“We are literally fighting for the identity of the Sinixt people. That’s what this case is about, fundamentally. It's a pretty remarkable thing the more you think about it.”

A legal win would be deeply personal for Shelly Boyd, a member of the Sinixt First Nation in her 50s who grew up under the shadow of being declared extinct.

“It never made sense to me,” Boyd told CTV News in a phone interview Tuesday evening. "It made me feel invisible.”

On the surface, the case before the Supreme Court is about hunting rights. Back in 2010, a descendent of the Sinixt named Rick Desautel, who lives in the U.S., crossed the border and killed a cow elk during a ceremonial hunt on traditional Sinixt lands in B.C. He was cited for hunting without a licence.

Desautel has challenged the case in court and won — three times. In 2017, a judge declared that Desautel was “exercising his aboriginal right to hunt” in the traditional land of his ancestors.

The case has moved from the lower B.C. courts all the way up to the Supreme Court of Canada in Ottawa. The Crown, which is arguing against Desautel, has said that the present-day Sinixt in the U.S. does not constitute an Indigenous group in Canada and therefore does not have access to hunting rights.

But the case goes beyond hunting. If Desautel wins, it could set a precedent for Indigenous communities that lived across the Canada-U.S. border for thousands of years to claim modern-day rights in Canada, even if they’re American citizens.

Underhill, who is optimistic that his client will win, says he hopes the court decision will mean that Indigenous groups living along the border who can prove their long-standing connection to Canada will be able to establish rights in Canada — be it hunting, fishing or land rights.

“That will, of course, apply across the whole border from east coast to west coast to the northern border with Alaska,” he said.

The Crown has argued that such a ruling could end up giving land rights to a “foreign group.”

“It is an unprecedented and remarkable proposition that a foreign group could hold constitutionally protected title to Canadian territory. It bears emphasizing that Aboriginal title is an exclusive right: it ‘confers on the group that holds it the exclusive right to decide how the land is used and the right to benefit from those uses,’” the Crown’s lawyers said in court filings.

In a hypothetical scenario, if the Sinixt had land rights in Canada, they would also have a say in development projects on that land.

Underhill dismissed the Crown’s arguments as a classic “floodgates” tactic to suggest that, if his side wins, scores of Americans will fight for right in Canada.

“It’s not just any American that can come across,” he said. “Only those groups that can legitimately show they were here in Canada before Europeans can claim those rights. And that to me is perfectly appropriate.”

Shelly Boyd has attended Supreme Court hearings in Ottawa, where she dressed in the traditional clothing of her people and carried a sign that read “Older than the Crown,” the name of a documentary on the Sinixt she helped produce. She says that, after hearing the court’s response, she’s hopeful for a positive outcome for her side.

“It has the makings of a real landmark decision for Indigenous people,” she said.

Boyd added that victory would also underscore the importance of “truth” in efforts to bring about “truth and reconciliation” by legally defining her people’s rights to their ancestral land.