Experts disagree on violent threat posed by incels in Canada

Experts disagree on violent threat posed by incels in Canada 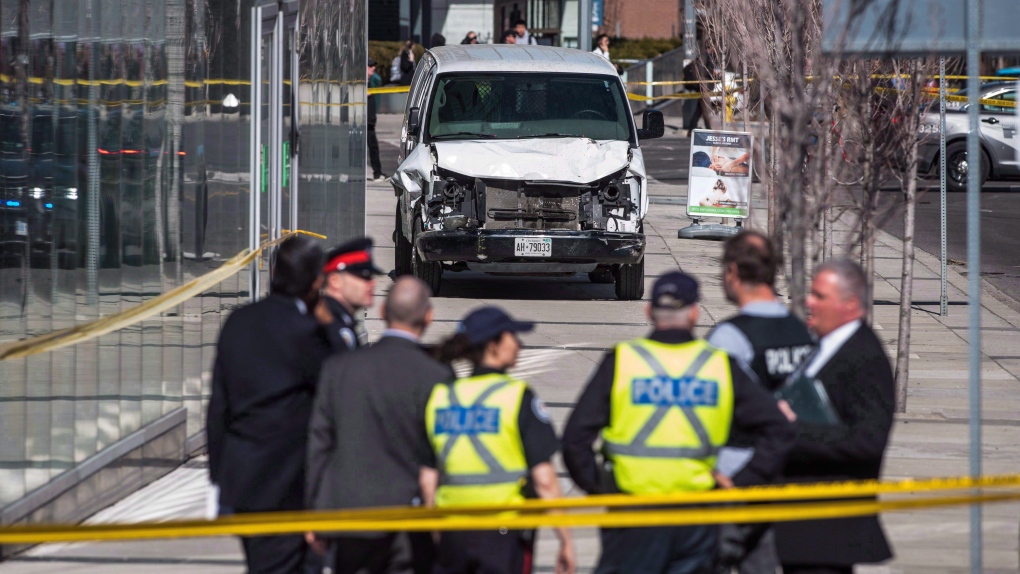 Police are seen near a damaged van in Toronto after a van mounted a sidewalk crashing into a number of pedestrians on April 23, 2018. (THE CANADIAN PRESS/Aaron Vincent Elkaim)
VANCOUVER -

Some experts say violent online rhetoric among so-called involuntary celibates is a concern as pandemic rules lift, but others say the threat of violence is overstated among a group of men who need mental health support.

Involuntary celibates or incels are made up predominantly of young heterosexual men who feel they are unable to attract romantic partners because of their looks or social status, says the think-tank Moonshot CVE. They often blame women, sexually active men and "oppressive societal structures" for their feelings of rejection and isolation, it says.

As attacks linked to the so-called movement mounted in recent years, authorities around the world began treating it as a terrorism threat.

A report released in September that was done for the federal government by Moonshot said lifting COVID-19 restrictions could result in more suicides, violence and acts of terror.

"Our researchers called (the pandemic) a great equalizer because incels believed everyone would experience the social and romantic isolation that they suffer on a daily basis," said Moonshot spokesperson Alex Amend. "The end of lockdown and things opening up again will actually be more of a triggering point for them, so it would be beneficial for practitioners to pay more attention to the re-entry."

"There is a critical need for mental health professionals to be trained to recognize incel ideology," Amend said.

But Sophia Moskalenko, a U.S.-based clinical and social psychologist specializing in radicalization and terrorism, said violence shouldn't be the main concern and she is calling for more research into non-violent incels in what she regards as a largely neglected mental health crisis.

"Radicalization is not necessarily the main issue among incels. Only a small minority of them actually endorse radical ideas, and an even tinier minority have ever acted out on them," she said in an interview. "My work has been consistent in that the relationship between ideology and radical action is extremely weak."

The term incel gained national attention in 2018 when Alek Minassian drove a van along a sidewalk in Toronto, killing 10 people and injuring 16 others. A woman who was hospitalized after the attack also succumbed to her injuries in November.

During his trial, the court heard that Minassian composed a message about the "incel rebellion" before the attack then posted it on Facebook immediately afterward, before he was arrested.

A psychiatrist told the trial the fact that Minassian was a virgin and never had a relationship with a woman contributed to him feeling lonely. Reading about incels made him feel better about himself, the psychiatrist said.

Minassian believed tying his attack to the incel movement would increase his notoriety, even though he acknowledged he had no real anger toward women, the court heard.

Minassian was never charged with terrorism but was found guilty of 10 counts of first-degree murder and 16 counts of attempted murder. He will be sentenced later this year.

A study conducted by the Institute for Strategic Dialogue in 2020 says there are at least 6,600 online channels motivated by ideological violent extremism with some form of Canadian involvement. On its website, Public Safety Canada said that makes Canadians among the most active in these online movements.

"The threat of IMVE (ideologically motivated violent extremism) in Canada continues to grow, and our government is stepping up our efforts to address it," the department said in an email.

It has given nearly $5 million to Moonshot since 2017 to analyze the online subculture in Canada. The U.K. think-tank targets people searching for online violent extremist information and forums, directing them instead to resources where they can get help.

In May 2020, terror charges were laid against a 17-year-old boy, who cannot be identified under the Youth Criminal Justice Act, after a stabbing attack at a Toronto massage parlour that resulted in the death of Ashley Noelle. It left another woman seriously injured.

The youth was initially charged with first-degree murder and attempted murder, but Public Safety Canada said Toronto police allegedly found evidence suggesting the attack was motivated by incel ideology. He was subsequently charged with two terrorism offences. The case is still before the courts and none of the allegations have been proven.

It is the first time police have treated an alleged incel-inspired attack as an act of terror and legal experts say it could force a reckoning of the courts' definition of terrorism.

Leah West, a former Department of Justice lawyer and national security expert at Carleton University, said the concept of terrorism has been a "moving target."

Because previous terrorism offences were either politically or religiously motivated, the courts must first define ideology, West said. Then prosecutors will need to prove involuntary celibacy meets that definition to prove the terror charges.

West said there are three main reasons for using the terror designation: to equally apply the law regardless of occupation, race, gender or political characteristics; to denounce the crime and act as a deterrent; and to acknowledge that a group was victimized.

She added that the designation does not affect sentencing, but it is a more difficult offence for the prosecution to prove.

The International Center for the Study on Violent Extremism in Washington published a study in January 2021 that examined COVID-19 measures and the Canadian incel terror designation to determine if either issue intensified feelings of isolation and fostered resentment toward society.

Researchers surveyed more than 400 men in August 2020 who were active in the largest incel-specific forum on the internet. They say 50.8 per cent of respondents said the terrorism charges increased their resentment toward society, while 30.2 per cent said pandemic-related isolation had done so.

Jesse Morton, one of its lead researchers, said he believes most academic research has relied too heavily on the radicalization trajectories of the relatively small number of incels that have carried out acts of violence.

"Data shows that very few people that hold radical ideologies go on to commit acts of violence and if you stigmatize them, you can actually facilitate greater violence," Morton said.

He said there is a need to directly engage with incels and for more study on the effects of public stigmatization and social exclusion on them.

Moonshot's next project for the federal government aims to increase understanding of incels to help prevent radicalization and better respond to violence, Public Safety Canada said in its grant disclosure.

"The main issue is (incels) are not getting the support they need, so they're seeking support in these toxic communities," he said. "If we can offer support for the mental health aspects, we can help people reintegrate into society, and hopefully prevent them from falling into the more violent behaviour."

This report by The Canadian Press was first published March 27, 2022.

In Canada, Medical Assistance in Dying is changing. In 2023, people who have a mental disorder as their sole underlying medical condition will become eligible for an assisted death. Originally, that was scheduled to happen on March 17, but the government has asked for a delay. CTVNews.ca/W5 outlines 9 things you need to know about MAiD.