OTTAWA -- Prime Minister Justin Trudeau says his government has contacted Chinese authorities about the detention of a sometime Canadian diplomat in China at a time of intensifying tensions between the two countries.

Trudeau spoke briefly to reporters Tuesday about the unexplained case of Michael Kovrig, an international-affairs analyst who worked as a political lead for the prime minister's official visit to Hong Kong in 2016 when he was posted there by the Canadian government.

"We have been in direct contact with ... Chinese diplomats and representatives," Trudeau said in Ottawa. "We are engaged on the file, which we take very seriously and we are, of course, providing consular assistance to the family."

News of Kovrig's detention comes after China warned Canada of consequences for its recent arrest of Huawei chief financial officer Meng Wanzhou at Vancouver's airport. A Vancouver judge released her on bail and under strict conditions Tuesday afternoon.

So far, it's unclear whether there is any link between the two cases, though a former Canadian ambassador says he has little doubt of it.

"It's clear that China is trying to put as much pressure as possible on the Canadian government to force us to return Ms. Meng to China," said Guy Saint-Jacques, a career diplomat who was Canada's ambassador to China from 2012 to 2016. "I can tell you that based on my 13 years of experience in China, there are no coincidences... The Chinese government wanted to send us a message."

Saint-Jacques said Kovrig wanted to stay in China beyond his assignment.

"At the end of his posting, he told me he loved China, he loved the Chinese people," Saint-Jacques said. He said he advised Kovrig to take an unpaid leave from the diplomatic corps so he could return to it someday if he wanted to.

Kovrig has been working for the International Crisis Group since February 2017 as its senior adviser for northeast Asia. One of his colleagues wrote in a short email that the organization had few details about his detention.

"We are doing everything possible to secure additional information on Michael's whereabouts as well as his prompt and safe release," said a statement from the group, which states its goals are to prevent wars and help shape policies to promote peace.

Active diplomats can be expelled by a host country fairly easily but arresting and holding one would be extraordinary.

"In this case, it's getting as close to that as possible," Saint-Jacques said. "Clearly, they wanted to catch the attention of everyone in Ottawa."

"He knows that the Chinese will put him through the process with interrogations and staying in a cell with probably 20 other people... He knows he is in for a tough time," Saint-Jacques said.

"But to escalate that to that level, at this stage, took me a bit by surprise," he said.

He said the Canadian government must seek clarity on whether Kovrig is accused of something specific yet and should explain to the Chinese that "we must find ways to lower the temperature because this could get out of control very rapidly."

"We're obviously worried about whenever a Canadian is put in a situation that puts them at some risk or jeopardy, where there's no apparent or obvious cause or trigger for that," Goodale said. "So, before we characterize it, we want to make sure we get all the facts. But at the same time we are sparing no effort to do everything we possibly can to look after his safety."

China's embassy in Ottawa did not respond to requests for information about Kovrig.

His LinkedIn profile says he served as the "political lead" on Trudeau's visit to Hong Kong in September 2016. At the time, Kovrig worked in Canada's consulate-general in Hong Kong.

He also describes himself as an international policy analyst and strategist "at the intersection of communication, politics, economics and global security." He says he has 20 years of international experience and about 10 years working for Canada's foreign-affairs department, which included postings in Beijing, Hong Kong and its United Nations mission in New York.

Roland Paris, who served as Trudeau's senior foreign-policy adviser until June 2016, wrote on Twitter on Tuesday that Chinese "retaliation against Canadian interests or Canadians would be unacceptable and pointless."

"It would have zero impact on judicial proceedings in Canada," wrote Paris, a professor of international affairs at the University of Ottawa. "Beijing should already know this from previous experience. Let cooler heads prevail."

Meng's arrest in Vancouver has opened a deep rift with the Asian superpower, which is Canada's second-largest trading partner. The United States is seeking to have Meng extradited on allegations that she tried to bypass American trade sanctions on Iran.

Beijing has warned Canada of unspecified "grave consequences" for the arrest of Meng, who is the daughter of Huawei founder Ren Zhengfei and has been described in some circles as "corporate royalty" in China. Huawei is one of the world's largest telecom companies.

The evolving dispute has created fresh uncertainties for Canadians who spend time in China.

Dan Kelly, head of the Canadian Federation of Independent Business, said it could cause senior executives from Canada to think twice about upcoming trips to China.

"The personal security issue isn't generally a concern on the part of people that visit China, but now it's a new ballgame," Kelly said.

International Trade Minister Jim Carr and Small Business Minister Mary Ng, both of whom recently returned from official visits to China, recommended Canadians conduct business as usual in the Asian country, even with the heightened tensions and threats that have followed Meng's arrest.

"Just keep doing what you're doing," Carr said Tuesday in an interview. "It's a very sophisticated relationship that goes back decades ... It's in the interests of both countries to broaden and deepen the trading relationship."

Carr and Ng had spoken just before news spread of Kovrig's detention, but one of their staffers said later that their views were unchanged.

A spokesman for the U.S. State Department said Washington is concerned by reports that China has detained a Canadian citizen.

"We urge China to end all forms of arbitrary detention and to respect the protections and freedoms of all individuals under China's human rights and consular commitments," Robert Palladino said.

Kovrig made headlines in August 2006 for very different reasons.

While he was a public-affairs officer at the Canadian mission to the UN, Kovrig surprised his girlfriend with a marriage proposal after luring her into the empty UN General Assembly hall.

His girlfriend, who grew up in Afghanistan, said yes.

"The General Assembly hall is a place for announcing commitments to the world," Kovrig said at the time. "Our romance has been international, so it seemed appropriate to make the commitment on international territory."

BREAKING: @CrisisGroup says its North East Asia Senior Advisor (and former Cdn diplomat) @MichaelKovrig has been detained in China. I've reached out to Global Affairs for comment. Unclear of the circumstances so far. #cdnpoli 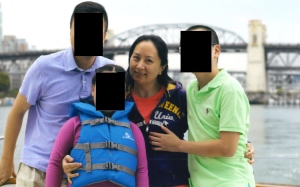