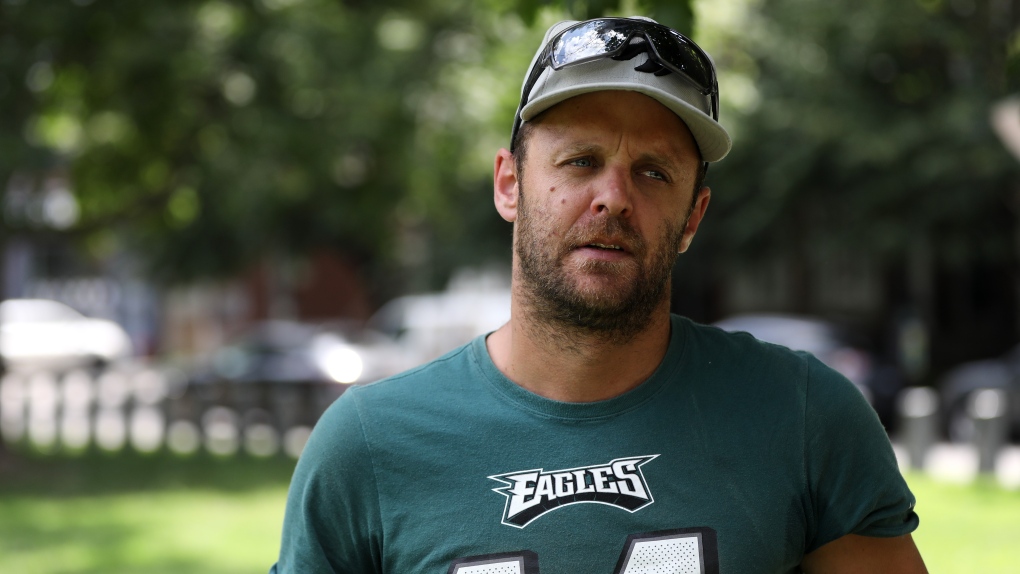 Jeffrey Brodie is seen in a downtown park in Toronto on Wednesday, July 24, 2019. Brodie, 42, who faces no charges, is challenging a new provincial law under which he was evicted from his rental unit and had his possessions seized without warning because someone was allegedly using the building as an illegal cannabis dispensary. THE CANADIAN PRESS/Colin Perkel

TORONTO -- A man evicted from his home and whose possessions were seized has launched a legal challenge to new Ontario legislation that aims to weed out illegal cannabis sales.

In an unproven application before Superior Court, Jeffrey Brodie argues the provisions enacted by the government of Premier Doug Ford this month are unconstitutional on several levels.

Key among the problems, Brodie argues, is that the law allows eviction of law-abiding tenants and the seizure of their belongings without due process. It also forces evicted tenants to prove their innocence.

"Notwithstanding that (Brodie's) indication to the officers that his residential unit is a separate and distinct part of the building, the officers refused to allow (him) to re-enter the building," the application states. "The applicant has been left without the basic human necessities, including housing."

Brodie, 42, had lived for more than a year in an upstairs rental unit in a building police said was being used as an illegal marijuana dispensary. On July 9, officers and city officials raided the building. They entered his apartment without warning and ordered him out. Officers seized most everything in the unit. He has just a duffel bag with some clothes.

"They came, they didn't give me a chance to get my stuff, and they threw me out onto the streets," Brodie said in an interview on Wednesday.

They charged the landlord for operating an illegal dispensary and barred re-entry to the building, with the law calling for a potential fine or jail time for trying to get back in. Brodie was not charged.

"The seizure of the applicant's property is unreasonable given that the applicant is not involved in the operation of the cannabis store and is not named as a party to the information or search warrant," asserts his application filed by lawyer Selwyn Pieters.

The impugned legislation -- part of the More Homes, More Choice Act -- amended the Cannabis Control Act of 2017, which allows police to close a building used for illicit pot sales and remove the occupants. The amendment closed a loophole that barred officers from evicting residential tenants. It also precludes Superior Court judges from awarding costs to a person trying to get back their seized property.

"The amendment allows officers to remove tenants from a premises without any, or inadequate, legislatively mandated restraints, oversight, accountability and/or transparency," the application states. "No consideration is given to the lawful nature of the tenant's occupation of the premises."

The "draconian" legislation is too sweeping and arbitrary, the notice asserts, and its application has caused Brodie serious physical, mental and emotional harm.

During legislative debate on the amendment, New Democrat Jeff Burch warned about the potential consequences of the law.

"Giving the ability for a family to be expelled from their home because a family member -- or worse, a visitor -- engages in an illegal activity is unthinkable," Burch said in May.

Brodie, a painter, said he's been sleeping on a park bench and has not been able to access his tools. The situation has left him in despair, he said.

Neither Attorney General Doug Downey nor Solicitor General Sylvia Jones responded to a request to comment. A spokesman for the Ministry of the Attorney General said it would be inappropriate to discuss the case given the litigation.