'Every single thing is gone': Marco Muzzo to be sentenced March 29

Marco Muzzo says he feels "great remorse" after driving drunk, but the mother of the children who died in the crash says she doesn't want to hear what he has to say.

Jennifer Neville-Lake and her husband, Edward Lake, left the courtroom as Muzzo took the stand, and only returned when he was finished speaking.

"I knew I did not want to hear anything he had to say," Neville-Lake told reporters gathered outside.

"Forgiveness is ... not like a piece of clothing you can put on. It's a process."

Neville-Lake said she acknowledged that the Crown is asking for the "highest ever" sentence in a case with multiple fatalities, but said the sentence doesn't mean much to her family.

Muzzo will be sentenced on March 29.

The judge announced the sentencing date after Muzzo, who has not previously spoken publicly about the crash, took the stand on Wednesday in Newmarket, Ont.

Neville-Lake said she thinks of the sentence suggestions in terms of how old her children would be at that time. If Muzzo were to get out of prison in 2.5 years, her daughter would have been starting school, she said.

Nine-year-old Daniel Neville-Lake, his five-year-old brother Harrison, their two-year-old sister Milly, and the children's 65-year-old grandfather, Gary Neville, died after the van they were in was hit by an SUV north of Toronto on Sept. 27.

The children's grandmother and great-grandmother were also seriously injured in the crash.

"He chose to do his part, and I'm living the consequences," Neville-Lake said.

"Every single thing is gone because someone decided to drink and drive."

Earlier on Wednesday, Muzzo told the court he knows his words will be of no consolation, but that he wanted to apologize to those affected, "from the bottom of my heart."

"I'm at a loss of words," he said, addressing the court.

"I wish that I could give back your family that I have taken."

Muzzo said he prays every day for the Neville-Lake family, and that he plans to spend the rest of his life "trying to atone" for his actions.

"I will be forever haunted by what I've done. I am truly sorry," he said.

Muzzo's lawyer, Brian Greenspan, took the stand to read accounts from character witnesses, including Muzzo's priest and his uncle.

The priest, who Greenspan said has been integral in Muzzo's life since the death of his father, wrote that Muzzo has displayed "great concern" for the Neville-Lake family.

A friend described Muzzo as humble and respectful, and "a friend to all."

The friend wrote that he drew strength from Muzzo, and sees that the man has been "tormented" since the crash.

"I read this letter because it embodies the sentiment from the community," Greenspan said. "A tormented and shattered spirit as a result of guilt and grief."

Greenspan said the letters had a "consistent theme" of anecdotes that show Muzzo as a good person.

"He is a human who made a mistake, a deadly mistake," Marc Muzzo wrote.

"All I can say is he's a human with a compassionate heart and a generous nature."

After reading the letters, Greenspan said his client has accepted responsibility for the crash, and that Muzzo will accept whatever punishment the judge imposes.

Earlier on Wednesday, the court heard from Crown attorney Paul Tait, who spoke to the judge about the devastating impact of Muzzo's actions.

"An entire generation, the next generation of the Neville-Lake family, was wiped out in one fell swoop," Tait said.

"Every drunk driver has a choice, and in this case, that choice had catastrophic consequences."

Tait said he hopes that the sentence would serve as a deterrent to others who consider drinking and driving, pointing to the frequency of impaired driving incidents in the area where the fatal crash occurred.

A psychiatrist's report entered in court said that Muzzo felt remorse and wanted to apologize to those affected by the crash.

Dr. Graham Glancy wrote that Muzzo shows signs of "considerable remorse," post-traumatic stress disorder and depression. The report said he was "distressed and tearful" when discussing the crash with the psychiatrist.

Muzzo told Glancy he was surprised by the results of a breathalyzer test taken after the crash, which showed his blood-alcohol level was between two and three times the legal limit. The report said Muzzo told Glancy he'd had some drinks before taking the wheel, but that he didn't feel like he was drunk when he began to drive.

The report suggested Muzzo's risk of repeating the behaviour was minimal, and recommended he receive counselling for alcohol abuse. Although there is no pattern of abuse, Glancy wrote, a treatment program would help him to abstain in the future.

Glancy wrote that his testing suggested Muzzo was "motivated to apologize to the family and to repay the family in any way suitable." 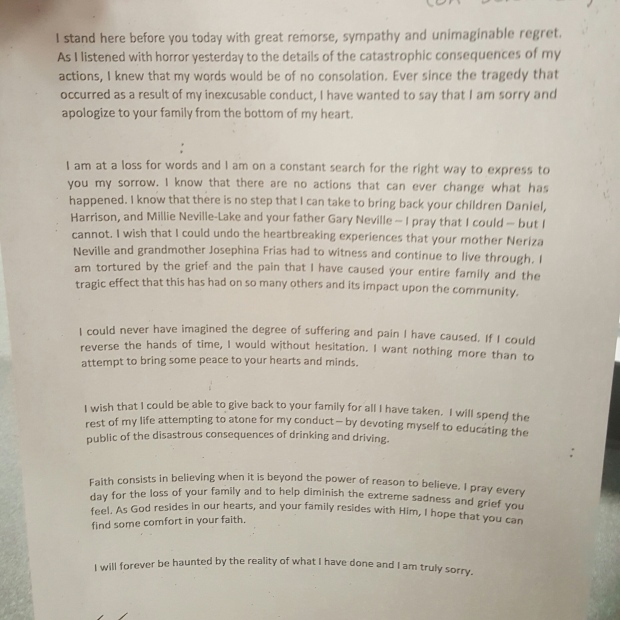