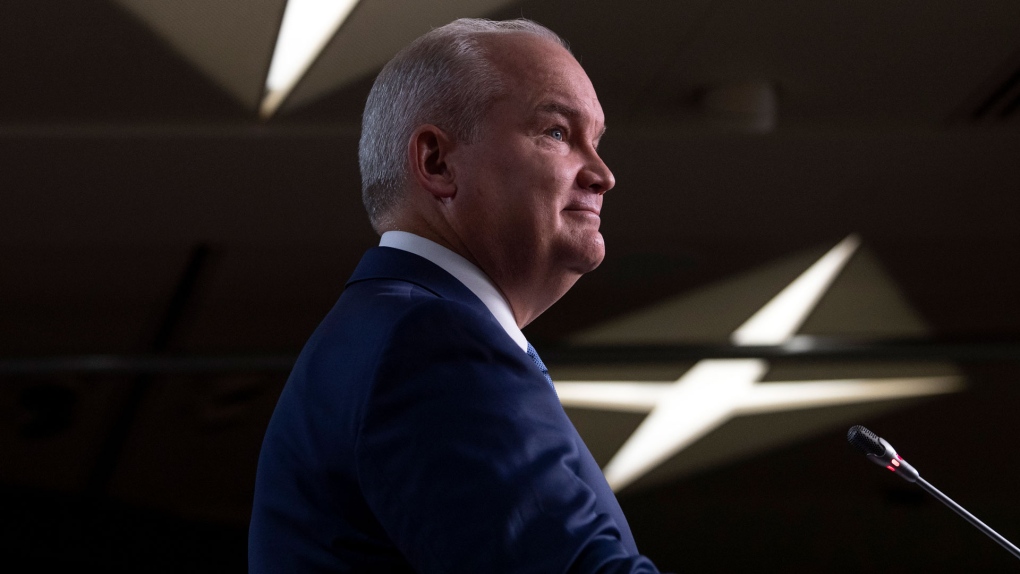 Conservative Leader Erin O'Toole listens to a question during a news conference on Parliament Hill in Ottawa, Tuesday, November 3, 2020. THE CANADIAN PRESS/Adrian Wyld

OTTAWA -- Erin O'Toole assured Conservative supporters that he never hid who he was in his bid to secure the party leadership, telling a high-profile conference on Saturday that the "true blue" campaign he ran to secure the party helm does reflect his true colours.

O'Toole fielded questions about his authenticity during an evening question-and-answer session that closed out a conference hosted by the Canada Strong and Free Network, formerly the Manning Centre.

He's being branded as "Liberal-lite" in some quarters, the same descriptor O'Toole once leveled at former rival and ex-parliamentarian Peter MacKay during last year's leadership race.

O'Toole, who during the contest pitched himself to party members as a "real Conservative," said he finds those now making similar comments about him to be "humorous."

He said he's been trying to grow the party's appeal to a wider swath of Canadians since assuming the party reins. O'Toole contended that bigger tent should include those who identify as Indigenous, working-class and LGBTQ if the party wants to ensure success in the next election.

"I didn't hide who I was when I was running for leader," said O'Toole.

"All of the things I ran on, I'm still running on now. I'm also, though, reaching out and trying to communicate our Conservative ideas to more people in new ways."

O'Toole told conference attendees that Conservatives must fight an election on the issues of today rather than those of decades past.

Those issues include his willingness to slash millions from the Canadian Broadcasting Corporation and modernize its mandate, as well as crack down on illegal rail blockades, positions he said help set him apart from Liberal Prime Minister Justin Trudeau.

The theme of Saturday's conference was "build back right," which played off Trudeau's oft-expressed wish to "build back better" when helping Canada's economy recover from the ravages of the COVID-19 pandemic.

The think tank's annual convention -- moved online in accordance with public health advice to avoid in-person gatherings -- was billed as the largest networking event for both small-c and big-C conservatives to discuss current issues.

Among them was how to expand the scope of the Conservative movement.

Lilly Obina, a black woman who campaigned for different Conservative candidates and ran for a nomination in 2015, said one reason the party doesn't resonate with the black community is its messaging around cuts, which needs to be better explained.

The senior project executive with Immigration, Refugee and Citizenship Canada told a panel that economics are important to the black community, who she said can feel targeted when the party talks about reducing the size of government.

"We need to be able to empathize with what goes (on) in the black community," she said.

"For example, when they say we are experiencing systemic racism, let's recognize that, let's be empathetic. You might not have solutions to everything, but at least just acknowledge that the problem exists."

Tenzin Khangdsar, who did cultural outreach for Alberta Premier Jason Kenney when he served as Immigration Minister under former prime minister Stephen Harper's Conservative government, said the party has had previous success with reaching newcomers despite the present-day challenges.

The former candidate pointed to how a large number of their votes were captured under former prime ministers Brian Mulroney and Harper, the latter of whom was aided by Kenney's efforts to build relationships with immigrant communities.

"He was dubbed the minister of curry in a hurry for a reason," said Khangdsar, citing how he would attend upwards of 15 community events in a weekend.

"No one likes when it you're approached just during an election, that's very transactional."

He suggested forging personal relationships is an important way to sway votes among new immigrants and ethnic-Canadians,, even more so than with non-ethnic residents.

"Our playbook was very simple: We were very confident that most new Canadians were small-c conservatives. We just had to make them big-C Conservatives," Khangdsar said.

"And I would even add that applies to most Canadians."

Harper was among those who appeared at Saturday's conference in a pre-taped panel discussion with former British prime minister David Cameron.

Moderated by Senator Linda Frum, the centre's president said their talk couldn't be publicized beyond the conference because of a contract with the former leaders.

This report by The Canadian Press was first published April 10, 2021.