Encyclopedia of hate: A look at the neo-Nazi militant movements with roots in Canada 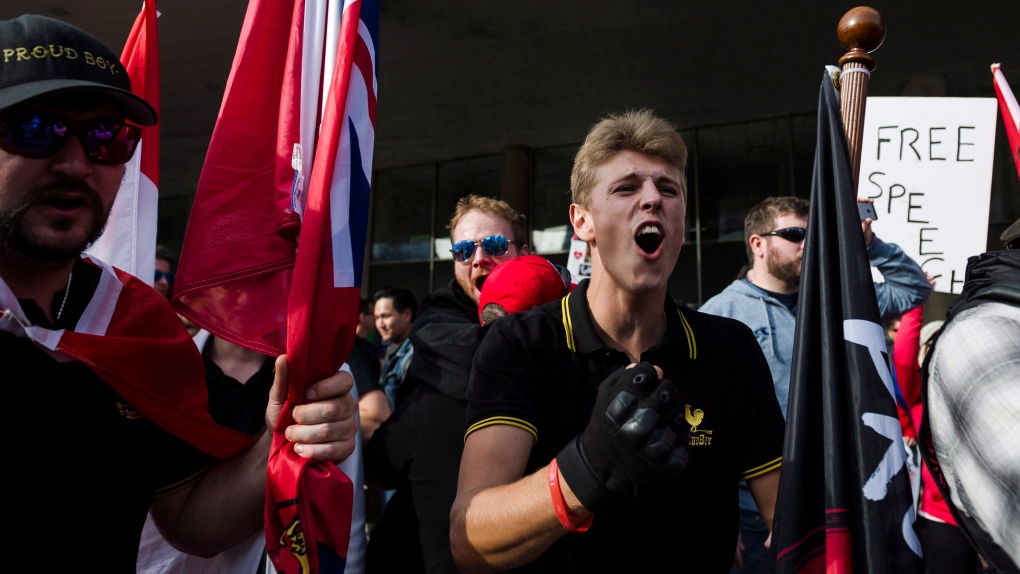 Members of the Proud Boys shout at a group of counter-protestors at Nathan Philips Square in Toronto on Saturday, October 21, 2017. THE CANADIAN PRESS/Christopher Katsarov

TORONTO -- A recent data dump from the now-defunct neo-Nazi forum Iron March has led to the identification of hundreds of users engaging with extremist groups around the world.

Among them are approximately 88 Canadians who span provinces, age groups, and religious affiliations.

Iron March was founded in 2011 by Russian nationalist Alexander “Slavros” Mukhitdinov and was considered the birthplace of several modern fascist far-right neo-Nazi movements.

The website -- which contained explicit calls for terrorism, death and genocide of minorities -- shut down abruptly in late 2017 after several members and groups were tied to deadly violence around the world.

Unknown to most, these groups live in communities throughout the country and experts say some of the most violent have a long history in Canada. Here is a look at some of the key groups related to the Iron March leak:

One of the most pervasive groups to emerge from Iron March is Atomwaffen Division (AWD). Founded in Texas in 2015, Atomwaffen is defined as “a series of terror cells that work toward civilizational collapse” by racism watchdog the Southern Poverty Law Centre (SPLC). Its members are described as believing in the use of violence or terrorism to accelerate what they see as inevitable social collapse.

The group has been tied to more than three murders in the U.S. and has been operating in Canada since 2016, according to Evan Balgord, executive director of the Canadian Anti-Hate Network (CAHN).

Several Canadian military members have been accused of having ties to AWD, including Master Cpl. Patrik Matthews, a reservist who went missing in August after being relieved of his duties. It was suspected that Matthews was a recruiter for the neo-Nazi group.

Described by most as a racist hate group, the Soliders of Odin was originally founded in Finland by self-identified neo-Nazi Mika Ranta as an anti-Muslim, anti-immigrant movement. According to Balgord, there are many different splinter groups associated with Soldiers of Odin, such as Northern Guard.

Canadian chapters of the group first appeared in early 2016 by patrolling communities, claiming to protect Canadians from what they characterized as “the threat of Islam.” Several Canadian chapters, including those in Edmonton, Hamilton, and Winnipeg, have claimed not to be anti-immigrant, despite the origins of the group, and have engaged in community volunteerism, according to CAHN.

In October, Alberta’s United Conservatives were criticized after photos posted to social media appeared to show Soldiers of Odin Edmonton members at a constituency association pub night. Alberta Premier Jason Kenney later apologized in a tweet, adding “groups like the Soldiers of Odin are not welcome at UCP events, period."

Blood & Honour is the only white supremacist neo-Nazi group to be named a terrorist organization by the Canadian government.

Defined by Public Safety Canada as an “international neo-Nazi network whose ideology is derived from the National Socialist doctrine of Nazi Germany,” the group originated in the U.K. in 1987.

Combat 18, the armed branch of Blood & Honour, have carried out murders and bombings in Europe and the U.S., and have been linked to several violent incidents in Canada.

In the words of Balgord, “They are some real nasty types” who were attempting to recruit younger generations on Iron March forums. A CAHN report released earlier this month also linked a Canadian soldier to the group.

Despite describing themselves as “western chauvinists” who deny any connection to the alt-right, the SPLC notes “rank-and-file Proud Boys and leaders regularly spout white nationalist memes and maintain affiliations with known extremists.”

The group attracted national attention in 2017 after a group of military members identifying themselves as “Proud Boys, Maritime Chapter” disrupted an Indigenous ceremony in Halifax on Canada Day. The five men did not face criminal charges after an investigation by the Royal Canadian Navy.

In November of 2018, a Clark County Sheriff’s memo circulated online containing information that the FBI classified the Proud Boys as an extremist group with ties to white nationalism. Soon afterwards, McInnes announced his departure from the group and subsequently filed a defamation lawsuit against the SPLC.

A month later, Special Agent in Charge Renn Cannon told reporters in Portland, Oregon that the FBI does not consider the Proud Boys an extremist group, contradicting their earlier report, according to the Washington Post.

ID Canada was formed in 2014 under the name Generation Identity Canada. This alt-right group is linked to the “identitarian” movement, an anti-immigrant ideology formed in the 1960s in France that promotes the “white genocide” conspiracy theory.

According to Anti-Racist Canada, the group first appeared in Sept. 2017 by posting flyers at several Canadian university campuses to recruit new members. Those flyers included text such as, “Canada in decay; mass immigration, diversity, and the ethnocide of Euro-Canadians.”

Its public website says there are nine chapters across Canada in what it claims to be the “fastest growing activist movement in Canada.” The ID Canada website encourages to join its “cultural events” and publicity stunts.

“Canada was never meant to be a melting pot of third-world migration. Diversity is in fact, our greatest weakness,” reads the website.

With files from Christy Somos and The Canadian Press