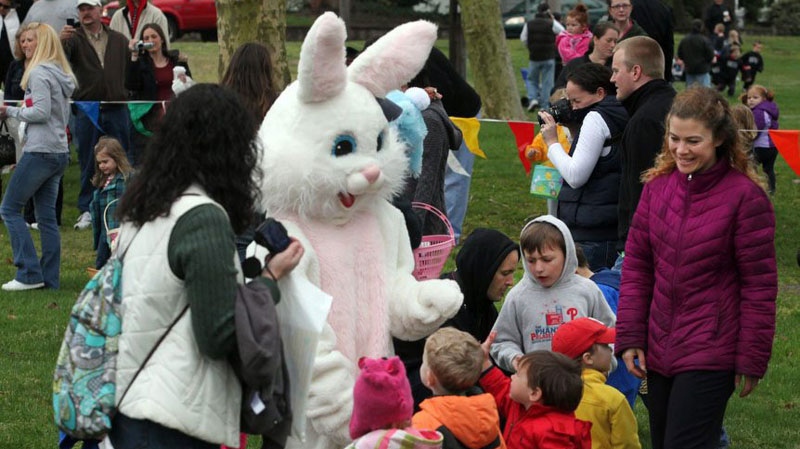 A Christian couple with "a strong religious faith" alleges that Hamilton's children's aid society closed their foster home because they refused to tell two young children in their care that the Easter Bunny is real.

In a charter application filed with an Ontario court, Frances and Derek Baars allege that the Children's Aid Society of Hamilton violated their freedom of conscience and religion, freedom of expression and right to be free from discrimination.

They allege their foster home was closed in March 2016 because they were unwilling to tell two young girls -- aged 3 and 5 - in their care that the Easter Bunny is real, in violation of their consciences and religious beliefs.

And they allege that the CAS created a false justification for the closure by saying the Baars would discriminate against a same-sex couple interested in adopting because of their faith.

However, a CAS letter to the Baars' confirming the closure of their home to fostering services, states that the goal was to return the girls to their biological family and that the Baars were "not in agreement with supporting the parent's wishes for the children's care."

"The parent's cultural and religious beliefs are to be supported by the child-care team and this was the direction provided with respect to the care of these children," states the letter, which was filed with the court.

The letter also alleged that the couple had engaged in conversations with the girls that had not been "age appropriate or sensitive to their needs and age and stage of development."

"As discussed in Pride training and outlined in the service agreement, it is a requirement that foster parents 'be respectful of the diverse cultural and religious needs of children and youth,"' it states.

The Baars' claims have not been tested in court.

Dominic Verticchio, executive director of the Hamilton CAS, said on Thursday that staff and foster parents are expected to put their "personal beliefs and values aside" when caring for children who are coming from "different settings."

He noted that some traditions such as the Easter Bunny and Santa Claus, are in conflict with true religious beliefs. With children who are in temporary care with the expectation of returning to their homes "we don't expect foster parents to say 'well, what you've been used to is really not real."'

Verticchio said the CAS tried to find a middle ground with the Baars that wouldn't compromise their beliefs and values, but "we also don't want you to impose those on children that are, literally, just in transition."

Closing a foster home is not something the CAS does lightly, Verticchio said, noting that they spend approximately six months training and vetting foster parents and are grateful for all who offer to take on fostering.

"To say that they disagree with the Easter Bunny and we closed them in retaliation is absolutely false," he said.

After much discussion "we came to the conclusion that what we expected of foster parents and what their beliefs were were not compatible," Verticchio said.

"Our attempt is to make it neutral," he said. "If we get five Muslim children coming in, we don't expect foster parents to be talking about Easter bunnies or Santa Claus."