Durex recalls some condoms in Canada over 'burst pressure' concerns 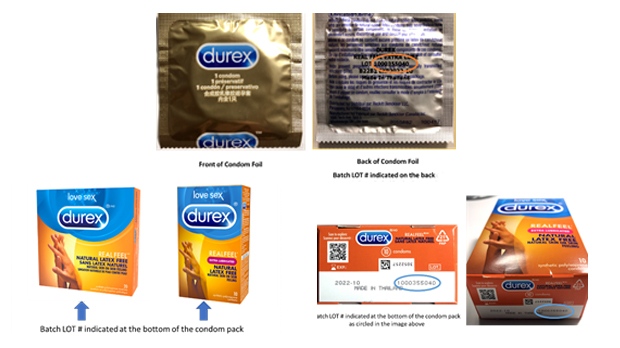 Durex has issued a recall for some of its RealFeel condoms sold in Canada after they failed its shelf-life test.

The company said there are no immediate safety concerns associated with using the recalled condoms.

Health Canada has issued its own safety alert that specifies Durex RealFeel 20ct condoms are "not expected to meet the registered burst pressure specification at end of shelf-life."

The brand’s parent company has issued a nationwide recall for batches with the following product numbers:

The batch numbers can be found on the bottom of the box and on the foil wrapping of individual condoms.

The recall does not apply to other types of Durex condoms.

Canadians who purchased the recalled products can get a full refund by returning the boxes to the store where they were purchased or by contacting the company directly.

The company says opened boxes will also be refunded.