Do chants of 'defund the police' help or hinder campaign for change? 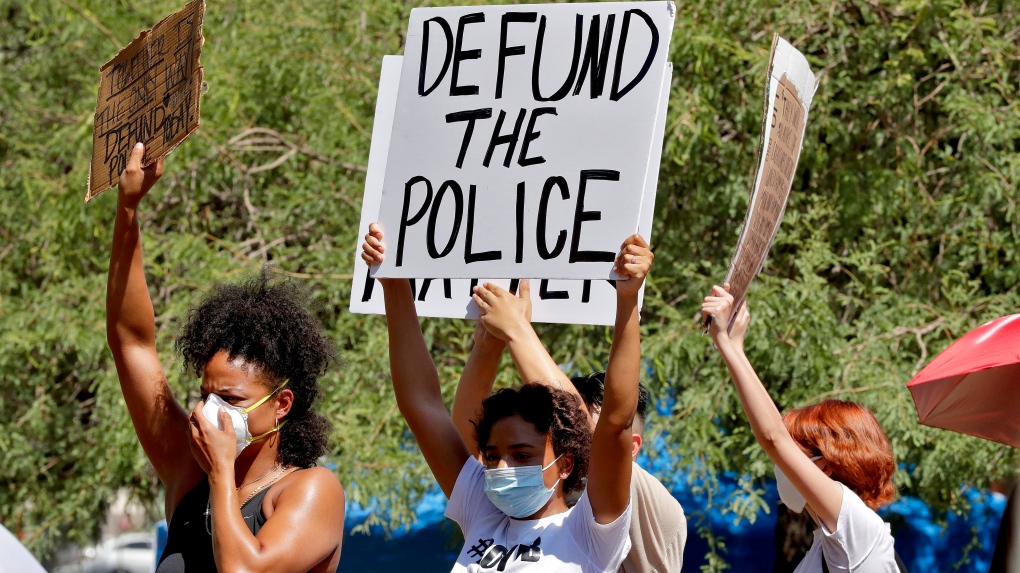 Protesters rally Wednesday, June 3, 2020, in Phoenix, demanding the Phoenix City Council defund the Phoenix Police Department. The protest is a result of the death of George Floyd, a black man who died after being restrained by Minneapolis police officers on May 25. (AP Photo/Matt York)

The phrase has been criticized as confusing, absurd and nonsensical. The simple, sweeping mantra has led some to believe protesters are calling for an anarchic state free of law enforcement, with no one to call for help. Others have supported the movement’s policy objectives but still suggested it needs “a better slogan,” one that doesn’t polarize groups who will impose their own meaning on the motto.

“Pick whatever words you need to pick, but that needs to stop. Quite frankly there are too many examples of the police brutalizing people for us to take this lightly, or to start working on other issues like branding.”

If you want to call it a brand and suggest the movement needs a better one, said Hudson, then she’d like to correct you.

“Quite frankly this is one of the most successful campaigns I’ve ever been a part of in terms of educating people and shifting their ideas on what it means to provide safety and security in our society,” she said, calling tweets for a “better slogan” just “concern trolling,” when someone feigns support for an issue only to reveal themselves as a critic.

“The concern trolling is actually a cover for something else, which is that those people just feel uncomfortable with the idea and they need to work that out for themselves,” she said. “I haven’t seen quite as good branding as this in quite some time. The amount of people that have attached themselves to this message is phenomenal.”

In June, Hudson was part of a webinar about the topic watched by 50,000 people. Within an hour of launching DefundThePolice.org, more than 2,000 emails had been sent through the site to political representatives, she said. Within a few weeks that month, the group had received more than 60,000 emails. Most, Hudson said, were in support of the movement.

“It’s unfair to say that people are just attaching themselves to some sort of slogan. That’s not what’s happening here. People are educating themselves on an idea that might be new to a lot of people and becoming surprised at how supportive they are of such an idea,” she said.

While she acknowledges the ideas behind the phrase are complex, Hudson doesn’t think the slogan has caught on because it’s “easy to chant,” though it certainly is shorter and more succinct than the demands of the movement behind it, as one Twitter user put it in June: “I know ‘Defund the Police’ seems radical and scary but ‘Dissolve Police Departments Then Rebuild Them as One Small Facet in a Network of Specialized Services So Police Aren’t Called To Handle Problems They’re Woefully Ill-equipped to Solve’ isn’t as easy to chant.”

In the U.S., some polls suggest that the policy objectives of the “defund police” movement have more support than the movement’s name itself. But Hudson believes the phrase is catching on because, when people learn about those policy objectives, it’s almost a “shock to the system how much it makes sense.”

Still others suggest different wording might be appropriate to better address the diversity in how policing operates across the country. “Defund is kind of a bad term because you look at it negatively,” said Erick Laming a Shabot Obaadjiwan First Nation and PhD candidate in criminology at the University of Toronto with a focus on Indigenous and Black community members' experiences with law enforcement.

“Divest might be a better term — see where we can take some money away and actually reallocate to something that might be beneficial to the community,” he said.

Reallocation is part of Black Lives Matter Canada’s demands, of which there are more than two dozen listed on its website: redirect a percentage of police budgets towards improved housing, food security and public transit, remove police from schools, de-criminalize drugs and sex work, and to invest in mental health services, and “demilitarize” police.

But Laming said the movement to defund is especially complicated when it comes to the 36 stand-alone First Nations police services, which are a federally implemented program that, unlike other police services, aren’t receiving billions of dollars.

“They’ve been chronically underfunded since the program started three decades ago. If you’re really talking about defunding police, you’re taking money away from some of these services that rely and don’t even have enough resources or money to do their jobs effectively now,” he told CTVNews.ca over the phone in June.

“How is that going to look in some of these communities which are somewhat under-policed and over-policed at the same time?”

For Hudson, phrasing and wording aren’t as important as the message.

“You can spend your time focusing on the branding, saying these words would be better, or we could focus our time on ‘Look, another person was killed on a wellness check.’ I don’t care about words. I care about stopping that sort of thing from happening.”