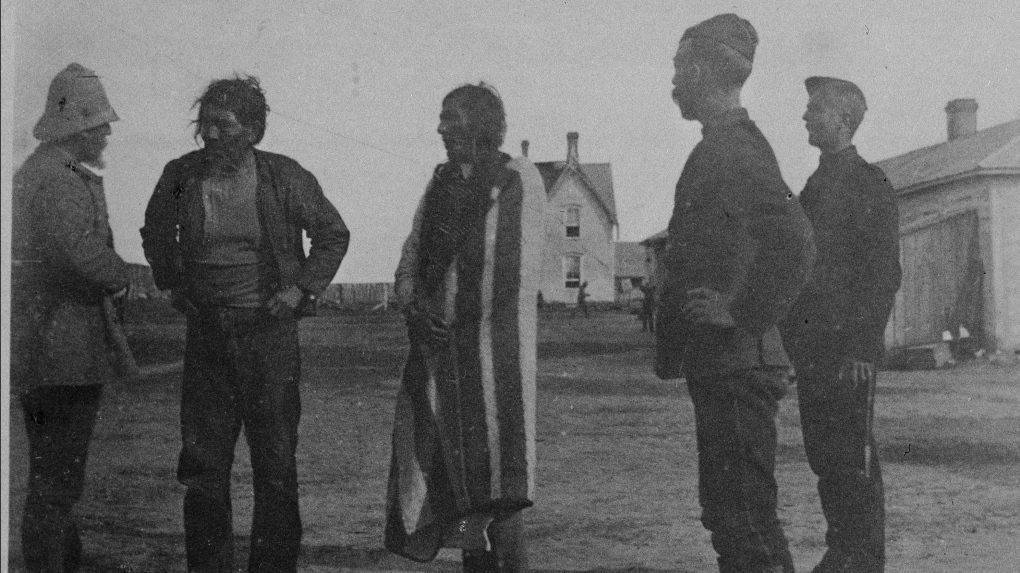 Chief Poundmaker, centre, is shown in a file photo from the 1885 Northwest Rebellion. (THE CANADIAN PRESS / National Archives of Canada-- Frederic Hatheway Peters)

When Milton Tootoosis thinks about the planned exoneration of Chief Poundmaker, he breaks down.

A headman and councillor at Poundmaker Cree Nation, about a two-hour drive from Saskatoon, Tootoosis says absolving the chief of any guilt in a battle with federal forces almost 135 years ago makes him think about the resiliency of his people.

"Our people went through a lot," Tootoosis, choking back tears, said in a recent interview with The Canadian Press.

Tootoosis has been part of an effort that he says has spanned years to press Ottawa to exonerate Poundmaker.

"It's not about the prime minister," Tootoosis said. "This is about Chief Poundmaker. It's about a great leader, a diplomat, a peacekeeper, who saved a lot of lives when he took action into his own hands."

Poundmaker, whose Cree name was Pitikwahanapiwiyin, was born in 1842 near Battleford, Sask.

The First Nation that bears his name remembers his legacy as that of a political leader who was critical of Treaty 6 while it was being negotiated and spoke up for the plight of his people under the federal government.

On May 2, 1885, in the Battle of Cut Knife Hill, Col. William Otter and members of the North West Mounted Police attacked a camp established by First Nations in the area.

"The idea that there was a plan to exterminate us is unthinkable," said Tootoosis, his voice shaking with emotion.

The First Nations pushed the attacking forces back and Poundmaker intervened to stop warriors from going after the retreating troops.

"He was unfairly labelled as a rebel," said Russell Fayant, who teaches Indigenous history and Metis culture at the University of Regina.

"He was a peacemaker who urged his people to have reserve and to not attack."

Poundmaker was tried in Regina for treason and was sentenced to three years at Stony Mountain Penitentiary in Manitoba.

"Really, that conviction was about 'let's put an Indian in jail so that Canadians can see that we've sent somebody to jail,"' said Fayant.

Poundmaker was released in 1886 because of poor health and died that same year.

Tootoosis said while many elders and people in the region consider Poundmaker a peacemaker, history has painted him as a traitor.

He and others believe the exoneration is a chance to set the record straight.

"The broader public needs to know."

Fayant said it also forces Canadians to see another version of history and correct past misinterpretations.

"What is the Indigenous side of the story?"

Fayant believes Poundmaker's absolution could reignite discussions about the legacies of other First Nations and Metis leaders from the 1885 NorthWest Rebellion and uprising. Those figures include Cree Chief Big Bear as well as Louis Riel.

The ceremony on Thursday will include an apology from Trudeau.

"Advancing reconciliation is a priority for the prime minister and our government, and a vital part of that work is addressing the injustices of past colonial governments," said Eleanore Catenaro, spokeswoman for the Prime Minister's Office.

Last November, Trudeau apologized to the Tsilhqot'in community in British Columbia for the hanging of six chiefs more than 150 years ago and delivered an "statement of exoneration" in the House of Commons.

While he believes the ceremony will be emotional and even surreal, Tootoosis said his First Nation still has grievances with the Crown over full treaty implementation.