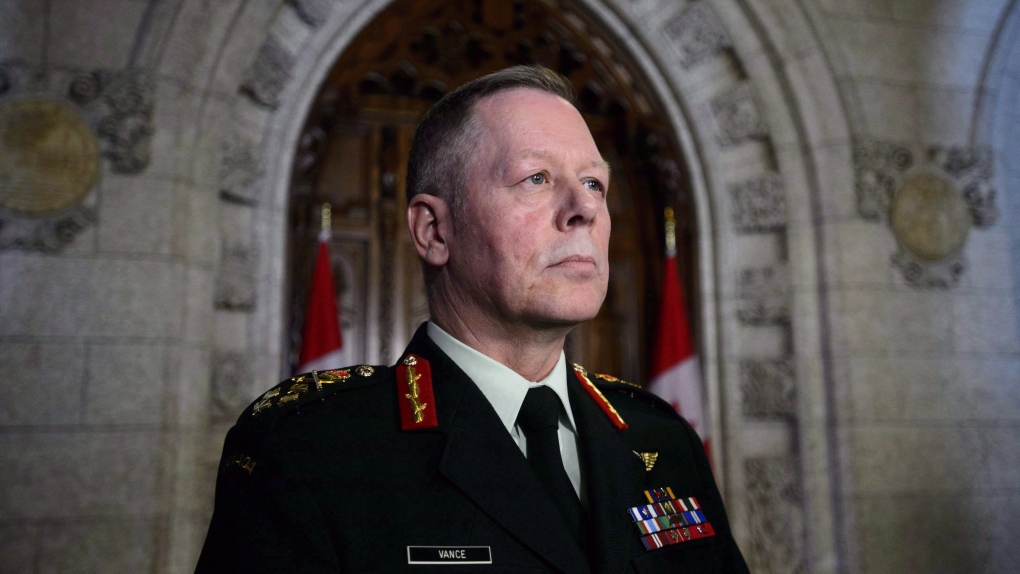 Chief of Defence Staff Jonathan Vance takes part in a press conference in the foyer of the House of Commons on Parliament Hill in Ottawa March 19, 2018. (THE CANADIAN PRESS/Sean Kilpatrick)

OTTAWA -- The Canadian Armed Forces received formal orders last week to start planning for the distribution of COVID-19 vaccines, though the military's top commander says preparations have been underway for longer -- and that his force will be ready.

The planning directive issued last week by chief of the defence staff Gen. Jonathan Vance lays out in detail for the first time how the military expects to help with vaccine distribution.

It notes the possibility of having to pick up COVID-19 vaccine doses from the United States and Europe on short notice, and outlines concerns the military will be asked to help with distribution while also responding to floods and other emergencies.

The emergence of the directive comes ahead of an expected fight Thursday between the federal Liberal government and the Opposition Conservatives, who will introduce a motion in the House of Commons demanding details of Ottawa's vaccine rollout.

The Conservatives say Canadians need, and deserve, to know when they can expect to be vaccinated against COVID-19, and who can expect to receive the shots first. That includes how the government is setting up a distribution network.

"In the middle of this historic health crisis, this government should not be operating behind closed doors," Conservative Leader Erin O'Toole said Thursday.

"Before Christmas, Canadians deserve the hope, the hope that will come with a plan to roll out a vaccine to help us turn the corner on COVID-19 in the new year."

While that distribution plan is being led by the Public Health Agency of Canada, the Canadian Armed Forces is expected to play a significant role -- as outlined by Vance's order on Nov. 27 establishing what has been called Operation Vector.

The directive was obtained by The Canadian Press and confirmed to be authentic by multiple sources, including the defence chief.

Though the directive was issued only last week, Vance said in an interview with The Canadian Press that Ottawa has been working for months on the distribution of COVID-19 vaccines. Those plans are now "well advanced," he said.

"We are as well poised as any country," he said. "And when the vaccines arrive, we'll be able to support the federal-provincial-territorial rollout plans. ΓÇª The actual logistics of rolling it out, we are in the same position that our allies are in."

Vance's order lays out a series of tasks for different parts of the military.

Those include flying doses "on short notice" from Spain, Germany, the U.S. and elsewhere "to designated points of distribution in Canada." It also means providing personnel to help with distribution in remote, northern and coastal communities.

Military planners are also preparing to have troops work at vaccine-storage facilities, deliver freezers and other medical supplies to various regions -- all while standing ready to also respond to other emergencies.

"Track 1 vaccines are likely to be delivered to Canadians at the height of the second wave of the pandemic and in the midst of the spring 2021 thaw -- a period of heightened flooding risk for many communities," Vance's order reads.

It goes on to say that the "essential challenge" will be anticipating where to position troops and equipment "while preserving adequate capacity to surge in scale to respond to other unforeseen domestic emergencies."

Vance said orders will start flowing to different parts of the military for Operation Vector in the coming weeks so individual troops know exactly what their specific jobs will be in a given situation.

Despite the advance planning, Vance said there remains a large number of unknowns, starting with the specific needs of individual provinces and territories when the actual delivery of a vaccine occurs and doses start flowing into communities.

"The details of the Armed Forces' plan become firm when we understand what support will be required by the provinces and territories," he said.

O'Toole accused Trudeau of using Fortin as a prop, and said the fact the military has the same questions as MPs and Canadians about the vaccine rollout proves that the government needs to step up what information it is providing.

Health Canada is in the final stages of reviewing vaccine candidates from pharmaceutical companies Pfizer and Moderna, with a decision expected by the end of the month. Federal officials expect vaccines to begin rolling out early next year.