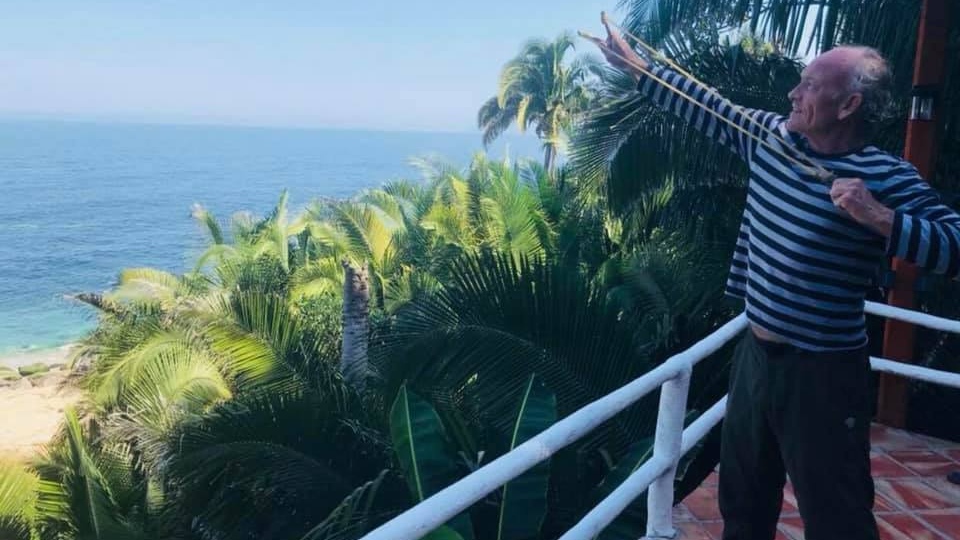 Malcom Madsen is seen playing with his sling shot at his tree house in Chonchos, Mexico. (Facebook/Brooke Mullins)

TORONTO -- The heartbroken daughter of a missing Ontario man she believes was murdered in Mexico is frustrated by the lack of progress in the police investigation.

Brooke Mullins took to Facebook this week appealing to people to share her post about her father Malcom Madsen, who was last seen in the early hours of October 28, 2018, in Puerto Vallarta.

She claims her dad was drugged by someone he trusted in a popular tourist bar.

Mullins, 41, from Port Hope, Ont., says the incident was captured on the bar’s surveillance camera.

“I can’t imagine what it would be like to be murdered by someone you love,” she told CTVNews.ca in a phone interview.

“The Mexican authorities have three main suspects. They claim they need to make sure every ‘i’ is dotted and every ‘t’ is crossed. I need more help from Canada. “

Madsen had started to split his time between Canada and Mexico in the last seven or eight years, his daughter said.

The retired jeweler, who was 68 when he disappeared, and was last seen wearing a grey short-sleeve shirt and black pants.

He was accompanied by a medium-build dark-skinned woman with long black hair in a ponytail wearing a pink dress, according to his missing person poster.

Mullins has used various investigators to try to trace her father and has flown to Mexico on a number of occasions.

“He called and left me a message the day before he went missing, telling me that he was excited to go out to his tree house in the next couple of days.

“We knew that Malcom was missing and in distress within five days. Close friends of my dad’s alerted me that they were unable to locate him and that he was expected to connect with one of them in Mexico.”

Mullins was hesitant to make her dad’s story public until his birthday on September 12 triggered her to set up the “Justice for Malcom” Facebook group, which has attracted more than 500 members.

Fond memories of Madsen were shared to the page by his friends reminiscing about his great sense of humour, alongside heartfelt pleas for more help from Mullins.

“Malcom was a joker, he liked to joke around,” Mullins told CTVNews.ca

Mullins is an only child and her mother passed away when she was 29.

Madsen, who grew up in Jamaica, was the son of Marius Madsen, who staked the claims at Red Lake, Ont., which led to the establishment of the Madsen Red Lake gold mine.

“One local politician went so far as to write to me, ‘well it is Mexico...’ Canadians are not protected on foreign soil,” she wrote.

“The Canadian embassy, Global Affairs, Mexican ambassador in Canada, Canadian ambassador in Mexico, you name them, I’ve been in touch with them. Police and politicians. Some sympathy, but no action.”

Mullins believes she has only made the progress she has because she has the financial means.

“I want change for other people too,” she told CTVNews.ca, referring to others frustrated by the lack of closure in some missing persons cases.

“I only got this far because I have the funds, others that don’t have to give up.

“In my heart of hearts I believe my dad is OK wherever he is.”

Global Affairs Canada confirmed to CTVNews.ca that it is aware of a Canadian citizen missing in Mexico.

“Consular services are being provided to the family in Canada. Consular officials in Mexico are in contact with local authorities to gather additional information,” Global Affairs said in an emailed statement Wednesday.

“Due to the provisions under the Privacy Act, no further information can be disclosed.”