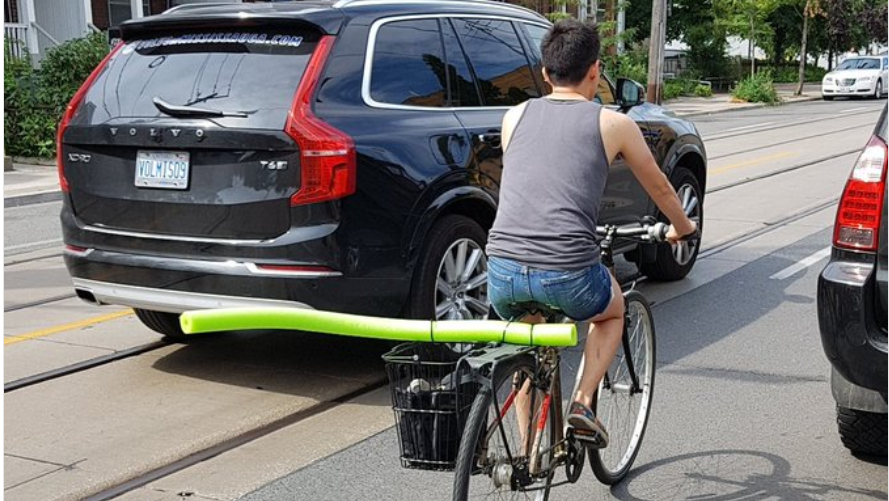 Some cyclists in Toronto have taken to attaching pool noodles to their bikes to create a safe distance between themselves and drivers. (Condo Chris Borkowski/Twitter) ‏

Some cyclists on social media are showing off an innovative strategy for protecting themselves from Toronto traffic by attaching a pool noodle to the back of their bicycles.

The idea is simple, a noodle dangling off the side of someone’s bike forces drivers to move into the other lane when passing, instead of squeezing next to them when trying to get by.

Under the Highway Traffic Act, drivers must leave a metre between themselves and a cyclist when passing, which Toronto Police Traffic Services say is a rule that isn’t always followed.

“Quite often what happens is a cyclist is clipped by a car, or knocked to the ground, because of somebody that’s not giving them enough room,” Const. Clinton Stibbe, spokesperson for the department, told CTVNews.ca.

In 2016, a Toronto Star article featured cyclist Warren Huska, who commutes 18 kilometres every day with his pool noodle in tow. He told the paper that since attaching the noodle to his bike, drivers have been giving him more space when they pass.

Stibbe says three cyclists have been struck and killed so far in 2018, compared to two all of last year. In total, 44 people have been killed on Toronto roadways in 2018, up from 39 at this point a year ago.

Some cyclists swear the pool noodle strategy is one way to maintain their safety, including Twitter user Neville Park, who said: “The difference is remarkable. Though it still feels like a game of chicken when a car is zooming up behind you.”

Though not illegal, Stibbe worries the noodles could cause some accidents.

“There’s always a chance that somehow it could contribute to a collision occurring, in the sense that if it’s knocked off the bike and gets caught into a wheel or something,” he said.

Stibbe says instead the best course of action for road safety is for everyone to obey the rules of the road.

“Everybody needs to respect each other, communicate, and follow the rules,” he said. “That’s how we make our roads safer.”

I shouldnt even be showing you 905ers this BUT..Drivers and cyclists are playing this awesome new game downtown. The cyclists strap pool noodles to their bicycles and I'm pretty sure if you can hit the pool noodle with your car you get points! #VisionZero pic.twitter.com/9Wy2tNbcNF

I also put the pool noodle back on the bike. The difference is remarkable. Though it still feels like a game of chicken when a car is zooming up behind you and you stay on course instead of moving right. #bikeTO #mastobikes