Crews to remove oil from decades-old shipwreck off Newfoundland coast 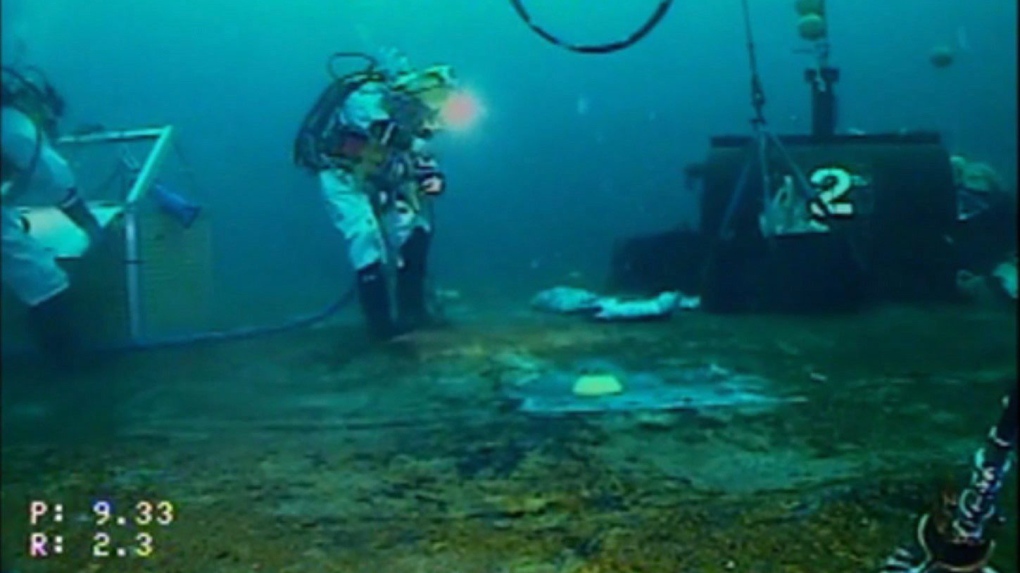 A still image from video footage showing the Manolis L undergoing a technical assessment is shown in this undated handout.THE CANADIAN PRESS/HO-Fisheries and Oceans Canada/Government of Canada

TWILLINGATE, N.L. -- More than three decades after the Manolis L sunk off Newfoundland's picturesque Notre Dame Bay, the tricky task of extracting leaking bulk oil from the shipwreck has begun.

The paper carrier sank near Change Islands in 1985 in about 70 metres of water and was dormant until April 2013, when fuel oil leaked from cracks in the hull during a powerful storm.

The coast guard installed devices to plug leaks and catch oil, but small sheens in the water and oiled seabirds have been reported since 2013. Ottawa awarded a $15-million cleanup contract to Ardent Global this spring.

The vessel is too deep for divers to safely attach the removal equipment to the hull of the ship, so remotely operated underwater vehicles (ROVs) will be used to pinpoint the best location to magnetically attach the hoses for drilling and extraction.

A "pump and flush" system will push water down and pump oil to the surface.

The operation has its risks. Heating the oil is necessary to remove it from the ship, but risks of a spill are greater than during the initial assessment in 2016.

To deal with any potential accidents, response vessels will be on constant standby.

The response team includes the coast guard vessel Earl Grey, which will be stationed around-the-clock, and nine response vessels. The operation will be monitored by coast guard helicopters and a Transport Canada Dash 8 plane.

There are 140 personnel working on the site, and crews have been staging emergency response simulations to prepare for possible spills.

Anne Miller of the Canadian Coast Guard said Tuesday the team feels prepared to deal with a spill should anything go awry.

"A lot of work, a lot of thought, a lot of what-ifs, a lot of preparation have gone into this, so we're ready," Miller said.

Currently, the team is assessing the precise positioning of the ROVs before the removal commences. Once it begins, the operation will be ongoing all hours of the day, with work expected to conclude before the end of the summer.

Oil retrieved from the ship will be transported back to St. John's for disposal, and the contaminated water flushed from the wreck will be processed and cleaned.

Carolyn Parsons and other members of the Manolis L Citizen's Response Committee have been lobbying provincial and federal officials since the 2013 storm -- writing letters, meeting with coast guard officials, and holding public events.

"We're really excited to see this finally come to its conclusion," Parsons said.

She said residents are happy to see the beginning of the end of lingering fears that a large oil leak could shut down the commercial fishery, or poison the natural environment that draws huge numbers of tourists to the area.

"There's been this threat hanging over all of that," Parsons said. "People are just really concerned that one day everything would be destroyed."

In 2015, documents showed that $1.7 million in federal money had already been spent trying to plug oil leaks in the sunken ship.

As work begins to diminish the environmental threat of the Manolis L wreck, recent legislation suggests that Canada's coastal communities may be less likely to be left holding the bag when derelict vessels are abandoned.

Last October, the Wrecked, Abandoned or Hazardous Vessels Act was introduced in the House of Commons, making it illegal to abandon boats in Canada, and empowering the government to go after the owners of the 600 derelict vessels already polluting the country's waterways.

Earlier this year, the federal government announced additional funding to assess and remove dozens of other abandoned and wrecked boats in Newfoundland and British Columbia.

Parsons said she's happy the new legislation will make it easier to address abandoned vessels, and is glad the community rallied to have the oil removed from the wreck before it becomes a dark spot on Notre Dame Bay's history.

"We didn't want a massive oil spill to be the thing media was writing about, we wanted this to be fixed," Parsons said.

"We're confident that they know what they're doing ... It's better that the oil come out in a controlled manner than you know, some storm in June and have it on the shoreline."