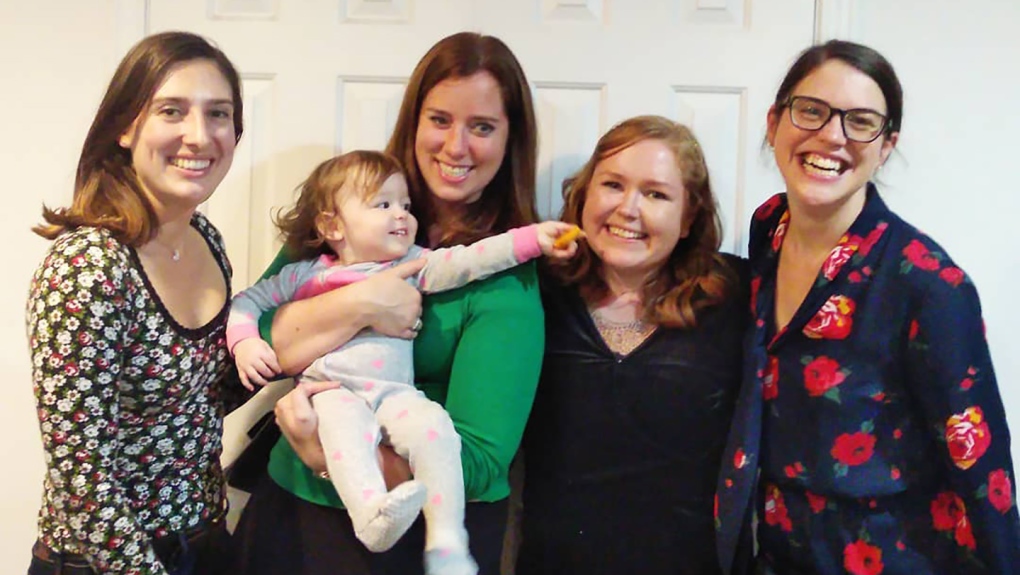 TORONTO -- Thanksgiving fanatic Genna Buck is used to going all-out with an elaborate turkey spread for as many as 30 friends.

But this year, COVID-19 will force her annual "friendsgiving" potluck bash to move online, where the avid party host plans to dine with pals over videoconference -- on a turkey meal she'll prepare the day before and drop off at "guests"' homes that morning.

Buck says the pandemic has scuttled an annual Thanksgiving dinner with her parents, brother and grandparents in Belleville, Ont., but she refuses to cancel the friends version she typically hosts the weekend before or after the holiday.

Even a scaled-back version wouldn't be the same, says Buck, whose guestlist has grown over six years to include co-workers, former classmates, and childhood camp friends.

"There's no such thing as a 10-person friendsgiving at my house, I can never do that," says Buck, referring to the 10-person bubble Ontario has imposed to contain COVID-19 spread.

"It's my way of showing love to the people that I love."

Still, she says surging cases of COVID-19 in Toronto and other parts of Canada demand a drastic rethink of treasured traditions, which she admits may very well include Christmas for her.

With a little over two weeks before Thanksgiving on Oct. 12, a growing chorus of public health and political leaders are urging Canadians to scale back any plans for a sprawling dinner party.

The pleas started with Prime Minister Justin Trudeau's sobering national address Wednesday, and were amplified Thursday by officials in Ontario and Quebec -- where the bulk of infections and deaths have occurred.

Health Minister Christian Dube urged Quebecers to avoid parties over the next few weeks -- including the Thanksgiving long weekend -- while Quebec's public health director suggested private gatherings are driving infections rather than restaurants, where restrictions are in place.

"Which is very different from a party where ... we forget (to maintain) your two metres," said Dr. Horacio Arruda, referring to social distancing guidance.

Earlier on Thursday, Ontario Premier Doug Ford also acknowledged the temptation to gather with extended friends and family but stressed the importance of maintaining precautions.

"Nothing is more important than family and loved ones getting together," said Ford.

Alberta's chief medical health officer, Dr. Deena Hinshaw, said Thursday that Thanksgiving can still happen as long as people practice caution and stick to gathering within their "cohorts," which in the province is a bubble of up to 15 people.

"Smaller is safer. This is not the time for large gatherings," Hinshaw said.

Infectious disease specialists warned any relaxation of the rules could undo months of sacrifice.

Dr. Gerald Evans, chair of the division of infectious diseases at Queen's University in Kingston, Ont., advised against travel and merging bubbles that share extended family members, even if it's for just one night.

"But if at Thanksgiving they're sort of saying well you know winter's coming this is our last chance (so) let's all get together, then all of a sudden you've got a conglomeration of what could be up to 30 people, and whatever other little connections they have."

Infectious disease epidemiologist Ashleigh Tuite cautioned against the temptation to expand bubbles by even one friend.

"If everybody thinks like that, you've really increased the number of contacts that people have and that really increases the potential for disease to spread in networks," says Tuite, an assistant professor at the University of Toronto.

"Ultimately, this is all about networks and how we're connected."

Tuite welcomed clear directives around Thanksgiving, noting many Canadians may be confused by restrictions on private indoor gatherings while bars and restaurants can allow far more guests.

"There's not a lot of consistency there, which can be cognitively really hard to figure out," she says.

A group of physicians and infectious diseases experts are calling on the Ontario government to shut down restaurants, bars, places of worship and other non-essential businesses in regional hotspots including Toronto and Ottawa, arguing they are especially vulnerable to outbreaks that can spread to schools, long-term care homes, and other congregate settings.

While agreeing that individual actions play a key role in containing COVID-19 spread, infections disease doctor Andrew Morris says the group believes social restrictions and increased testing is not enough. He says more aggressive measures are needed now if we hope to see the pandemic's trajectory shift in coming weeks.

"Because cases grow exponentially, every delay magnifies the problem even more," says Morris, a U of T professor and physician at Sinai Health and University Health Network.

"It's very clear they're doing everything at the moment to avoid changing how society is functioning in terms of the economy."

Trudeau warned of a fall "that could be much worse than the spring" but suggested quick action now could give Canadians "a shot at Christmas."

Evans was skeptical the pandemic could be reined in by Dec. 25, and suggests Trudeau dangled the prospect of a holly jolly gathering as a way to counter bad news "with a hopeful message."

Earlier this week, Toronto Mayor John Tory told the city to expect fall and winter events to be cancelled, including a popular six-week Christmas market that draws hundreds of thousands of revelers and New Year's Eve celebrations at Nathan Phillips Square.

Morris, too, doubted much would change without a significant clampdown.

"Things can change a lot but certainly the provinces that are being hard hit in Canada -- B.C., Alberta, Ontario and Quebec -- are absolutely trying to take a wait-and-see approach in hoping that things will simmer down.

"And as you know, so far it hasn't been very successful."

It's really difficult to ask people to curtail their community ties, says Buck, who is reluctant to judge others for taking risks she may not be comfortable with. She says every individual will have their own health factors to consider.

"I've also had people that have really struggled with mental health during this time and just need to be around other people and I understand that urge so much," says Buck, who is asking her Thanksgiving guests to donate money to the social services agency where she works, West Neighbourhood House.

"But at the same time, this thing is real and it's super serious and you shouldn't take unnecessary risks."

This report by The Canadian Press was first published Sept. 25, 2020.