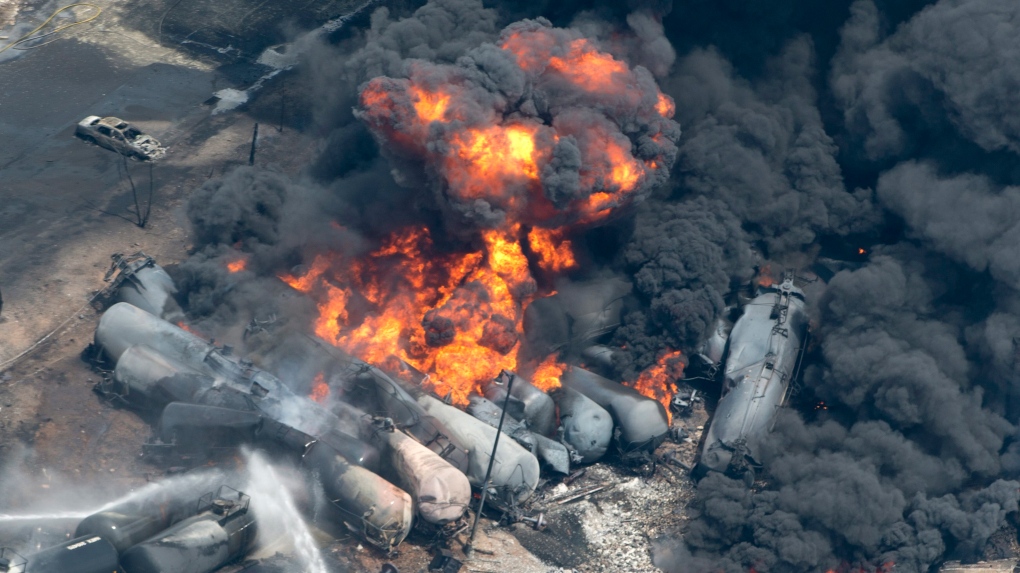 MONTREAL -- A Quebec Superior Court justice will begin hearing arguments Monday that could determine whether more than $431 million can be distributed to victims and creditors of the Lac-Megantic, Que., train derailment or if the entire settlement process will come to a screeching halt.

Lawyers for Canadian Pacific Railway -- the sole firm accused of responsibility in the rail disaster not to participate in the settlement offer -- will argue the process is illegitimate and unfair, according to court documents and lawyers representing the victims.

CP spokesman Martin Cej said in an email while families of the 47 victims of the July 6, 2013 tragedy deserve compensation, CP is not one of the companies responsible for what happened when the runaway train owned by Montreal Maine and Atlantic Railway Limited (MMA) derailed and exploded in Lac-Megantic's downtown.

Lawyer Jeff Orenstein, of Consumer Law Group, helped launch a class-action against about 25 companies -- including MMA and CP -- accused in the derailment. The class action was put on hold, however, pending the result of the settlement process.

If the Superior Court Justice Gaetan Dumas approves the settlement fund, all the companies who together offered the combined $431.5 million will be released from legal liability in the U.S. and Canada and permanently removed from the class-action.

Court documents state CP is arguing the bankruptcy protection process currently underway in Canada -- which is tied to the settlement offer -- should not be heard in Quebec Superior Court but in Federal Court.

CP argues the MMA was a railroad -- under federal jurisdiction -- and therefore not subject to Quebec bankruptcy proceedings.

If CP is successful, the victims and creditors of the train disaster could have to go through years of expensive and time-consuming litigation before seeing any money, says the court-appointed monitor of the Canadian bankruptcy proceedings for the defunct MMA.

"CP is effectively trying to have the whole Companies' Creditors Arrangement Act (CCAA) proceedings terminated and bring the settlement process to a halt," said Andrew Adessky with Richter Advisory Group.

MMA, which operated as different companies in the U.S. and Canada, didn't have anywhere near enough insurance to pay damages to victims and therefore went into bankruptcy protection on both sides of the border.

Almost 4,000 people launched a class-action lawsuit against about 25 companies accused of responsibility for the derailment. All agreed to compensate victims in exchange for being released of any legal liability for the tragedy, except CP.

The $431.5 million offer was accepted unanimously by creditors and victims in Lac-Megantic on June 8.

Adessky said "the settlement fund is predicated on people contributing money in exchange for releases (from legal liability) and the releases have to come through the (bankruptcy) process."

That's why it's important for victims of the train disaster to win against CP's motion, he said.

CP also argues the settlement process is unfair because if the other companies are released from legal liability, it will no longer be able cross-sue them if they elect to take CP to court to recoup the money they gave to the settlement fund.

"This compensation fund should not be used to free those parties responsible for the derailment from future liability and legal action," Cej wrote. "CP contends that it is not among the parties responsible for the incident as the train was not operated by CP employees or travelling on CP tracks, nor were our locomotives, railcars or product involved in the derailment."

The train carrying crude from the U.S. was handed off from CP to an MMA-controlled rail network for its final journey to a New Brunswick refinery.

Before it arrived in the East Coast it derailed in the Quebec town of Lac-Megantic and destroyed part of its downtown.

The victims say CP should have known the crude was not labelled properly as well as that MMA was allegedly taking risks in its transportation of the highly volatile substance.

Orenstein said his case was authorized by a judge in May but has been put on hold pending the outcome of Monday's hearing.

The class-action against CP will go forward if the railway company refuses to be part of the settlement fund, he said.

"CP has been in the courtroom for over a year sitting there and they have not stood up and said (they objected to the settlement process) until now," Orenstein said.