Couple built self-sustaining home for $1K, decade later they could be on the hook for $5K 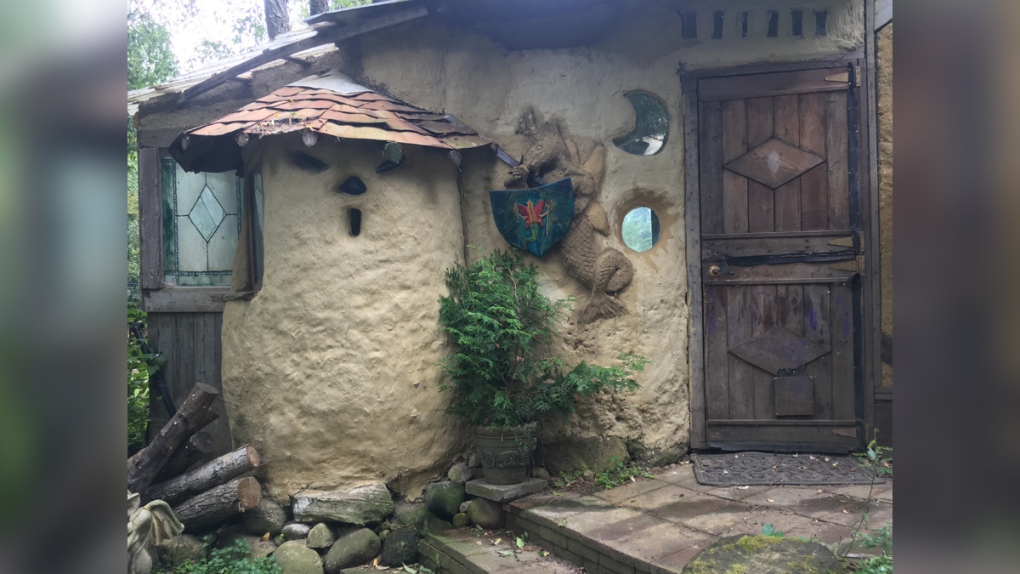 A view of the exterior of Bryce and Misty Murph'Ariens' home. (source: Bryce Murph'Ariens)

TORONTO -- A couple with a self-sustained farm in rural southern Ontario is trying to live completely off of the land. But according to their local government, they're not legally allowed to be living on it at all.

The Township of Southgate is demanding that Bryce and Misty Murph'Ariens get a building permit for their eco-friendly cottage -- a structure that has already stood for ten years. Why? Because when the couple started construction on their unconventional cob house in 2009, they did so without an official permit.

The couple says they can't afford to apply for a building permit. Now, after a back-and-forth correspondence with the local authorities, they are being taken to court.

About a decade ago, Bryce and Misty Murph'Ariens decided they wanted to live a little differently.

Misty Murph'Ariens told CTVNews.ca in a phone interview that she had "multiple chemical sensitivities," and wanted to find a house that she "wasn't allergic to." So the couple decided to build their own.

"When we started researching building for ourselves non-toxic, it led us to traditional building techniques," Murph'Ariens said. "Building with earth."

The walls of their home are hand-sculpted with various earthen materials, such as cob (a mixture of clay, sand and straw) and wattle and daub (a similar material to cob, but spread over a weave of branches) and strengthened with a timber frame.

Murph'Ariens compared the design to a Tudor-style English cottage. Despite the construction technique's long history, it doesn't obviously align with provincial building codes in Ontario.

Before starting construction, they went to the Chief Building Official for the township, who was then a man named Doug Kopp, Murph'Ariens said.

"I basically interrogated (the building official) on the phone, and said like, ‘Hey, give me the details (on what we can and can't do),' cause I really wanted us to follow the rules," Murph'Ariens said. One of their plans was to make the house small enough that a building permit wouldn't be needed, according to their website.

The building official told her that anything requiring the use of heavy equipment would need official permission. Finally, she said he told her, "Look, lady, if you can do it with a shovel, you don't need a permit."

Murph'Ariens recalled Kopp arriving at their property one day while they were building.

"He got out of his car, didn't really talk to us, but he looks around very quickly, saw we had a little camper there that we were staying in while we're building, looked at the building itself, thought, ‘Yup, no house here,' and he drove off." Murph'Ariens said. When they heard nothing more from him, they took it for approval.

CTVNews.ca could not reach township officials for confirmation of Kopp's identity, but several documents from the Township in 2013 and 2014, available through their website, identified a man named Doug Kopp as the Chief Building Official at that time.

It does not appear that Kopp works for the Township of Southgate anymore, however. An article for BlackburnNews.com in 2015 said that chief building official Doug Kopp had parted ways with the township in mid-July of that year, but no reason was given.

Misty and Bryce Murph'Ariens lived happily in their cob home for years, cultivating plants and farm animals such as a dairy cow and chickens. What once was a cheap house built out of necessity became the inspiration for an environmentally-conscious lifestyle, and an art project of its own: they've added sculptural elements such as relief images of trees and mermaids to the unique house.

The first version of their home covered less than 10 square metres with a loft, but over the years, it gained small additions. Even though the house was growing, the couple was sure they had their community's approval. Murph'Ariens even wrote articles about sustainability and their cob house for a local paper, The Bizbull.

Dave Millner, chief administrative officer for the Township of Southgate, said that they received a complaint from the public about the house.

"The home is very secluded in a bush … it can't be seen from the road," he told CTVNews.ca over the phone. "So we react on a complaint and that's how we found out."

In August of 2018, the couple received an Order to Comply from a new Chief Building Official for the township, Bev Fisher. The orange slip, stapled to their front gate post, instructed them to get a building permit.

Murph'Ariens sent back a letter titled "Notice of Dismissal of Order to Comply." In the letter, she questioned why they needed a building permit, if they were legally obligated to get one, exactly how many fees she was being asked to pay, and what would happen if they filed a building permit and it was denied.

Murph'Ariens was concerned that any building permit that they filled out would be denied because of how different their house is: for instance, part of the building permit process involves inspections of septic tanks and sewage plans, she said, and their home has none. They use a composting outhouse.

She said she delivered her letter in person to Fisher and the building department.

"Instead of replying that day, they said they needed some time to think about it," Murph'Ariens said. "Okay. And then their lawyer replied (with) ‘Make the application, or we take you to court.'"

Court didn't come up right away. Murph'Ariens made a Facebook page specifically to post scans of the correspondence that she alleges was exchanged between her and the lawyer representing the township.

In the series of letters, the lawyer seemingly attempts to answer Murph'Ariens questions -- attaching relevant sections of the Building Code Act as explanation -- but appears to fall short of fully clarifying exactly how much the fees might be.

CTVNews.ca reached out to the lawyer for comment, but had not received a response at the time of publication.

"They don't say, your total may be this amount, subject to this or that -- they just sent us the full printout of every fee that their office charges," Murph'Ariens said. "But there is something called a development fee, which seems to be attached to some, maybe all applications. It's $5,000."

A Schedule of Fees posted by Murph'Ariens on Facebook which seems to come from Southgate's Building Department cites a charge fee of $5,141.00 for the development of a rural single or semi-detached home.

At first they were given a deadline of a week to file the building permit, she said. Then the couple negotiated a month. They were still running a farm every day and homeschooling their young children.

Murph'Ariens said they couldn't make the money, and also felt that not enough of their questions had been answered. She said her final letter explaining their situation to township officials went unanswered.

Then, at the end of summer came the court order.

"We're just looking for compliance related to say, safety issues, for protection of the family," said Millner about the need for a building permit and inspections. "We've been trying to work with them to give them every opportunity to comply, and at this point, we're still waiting for that compliance."

He said he couldn't comment further, and that "it's in a legal process right now … that's between the parties."

The couple is ready to fight for their home, unconventional as it is.

"We've basically fallen in love with building with earth, and what the house means to us is really – it's a way of life," Murph'Ariens said, disputing the suggestion it is unsafe for habitation.

Their tiny cob home, even with all the adjustments over the years, has cost them only $1,000 to date, and the idea of sustainable living is deeply important to Murph-Ariens.

Their home could serve as an example of a way to tackle homelessness, or even just making the prospect of owning a home more affordable for everyone.

"If people want a million dollar house, that's cool, they get that job. But if they just want to live and grow vegetables or whatever, study into their old age, they could have a house and they don't need a mortgage for it," she said, lamenting the building codes that could stand in their way.

They are set to appear in court on September 25.