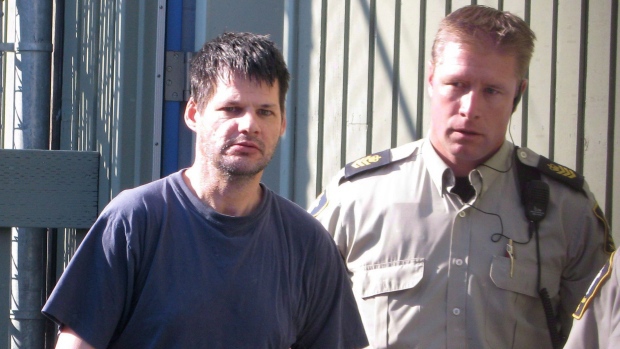 Randall Hopley is led out of the Cranbrook, B.C. courthouse on Sept. 14, 2011. (Bill Graveland / THE CANADIAN PRESS)

VANCOUVER -- A convicted child abductor will stay behind bars after a parole board determined he is still likely to harm a child if released from prison.

A federal parole board decision issued earlier this month says 52-year-old Randall Hopley has not participated in rehabilitation programming and has declined to participate in psychological assessments.

"Your offending behaviour has been described by professionals as difficult to treat and you have refused to participate in interventions while incarcerated," the decision says. "There is no indication that you have lessened your risk to the community."

Hopley snatched a sleeping three-year-old Kienan Hebert from a second-floor bedroom in Sparwood, B.C., in September 2011. He kept the child for four days before returning him physically unharmed after Hebert's parents made a public plea.

Hopley later pleaded guilty to abducting the boy, breaking and entering and possession of stolen property. He was sentenced to more than seven years in prison, plus 10 years of supervision following his release.

He was also designated a long-term offender after various courts have heard that he sexually assaulted young children while living in a foster home as a teen.

The recent parole board decision notes Hopley has a long history of offences against children and displays "little remorse or understanding" of his criminal behaviour.

The decision says Hopley will remain in custody because officials believe he still poses a threat to children in the community.

"The board concludes you are likely, if released, to commit a sexual offence involving a child before the expiration of your sentence," the decision says.

The document recommends that Hopley completed a sex offender management program and demonstrates some insight into his crimes before his case is reviewed again next year.