Comparing rents: The costs of urban living in Canada vs. U.S. 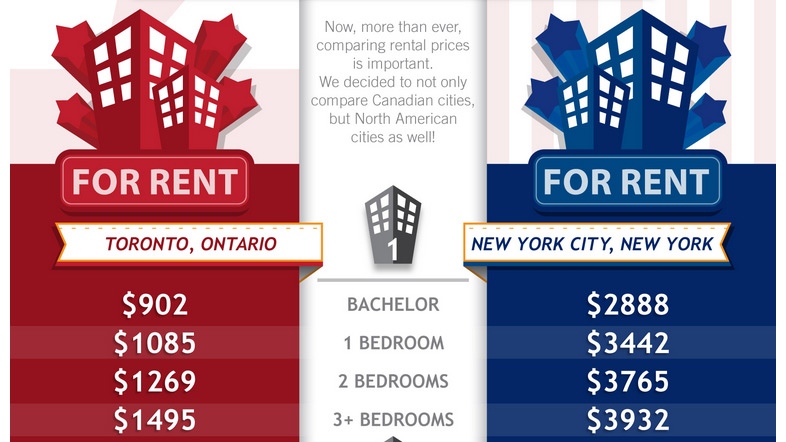 An infographic by RentSeeker.ca compares rates in Toronto and New York.

The cost of renting an apartment in the biggest cities across Canada may seem steep to some, but Canadian renters still pay significantly less than their neighbours to the south.

The data released by RentSeeker.ca on Thursday compares average rental rates for apartments in 25 Canadian and 25 American cities.

RentSeeker.ca is one of Canada's largest online apartment search sites, which connects renters with owners of houses, townhouses, condos and rental apartments. The Canadian data is from the Canada Mortgage and Housing Corporation in September, which compiles rental rates of available apartments based on reports from landlords, while the U.S. data is from MyApartmentMap.com, an American website that currently lists more than 430,000 apartments for rent.

RentSeeker.ca looked at average rents for bachelor, one-bedroom, two-bedroom, and three-bedroom apartments. The data did not list the average size of each style of apartment. All rates were converted to Canadian dollars using an exchange rate of C$1.32 for every US$1.

Of the 25 Canadian cities, the site found the highest rent for a bachelor pad was in Vancouver, at $930 per month. The cheapest bachelor apartments of the cities examined were in Longueuil, Que., at $509 per month.

South of the border, the most expensive average for a bachelor apartment was unsurprisingly in New York City, where the average was $3,813. The cheapest of the 25 cities was Detroit, Mich. at $779 per month.

Canadian apartments with three or more bedrooms were most expensive in Vaughan, Ont., a city north of Toronto, costing a monthly average of $1,520.

The least expensive apartments with three or more bedrooms were in Longueuil at $762 per month, and in Detroit at $1,122.

The breakdown of average rents in the 50 cities considered can be seen in the infographic below. It can be viewed in a larger format online. In the RentSeeker.ca graphic, prices of American rental rates are in U.S. dollars.