Community rallies to save dog trapped under Toronto streetcar 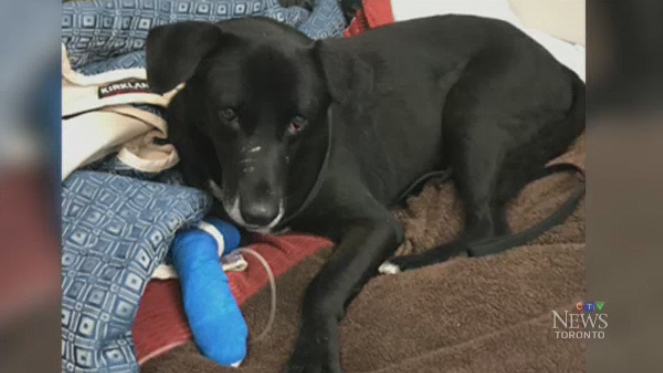 Nero, a rescue dog from Israel, was rescued in Toronto on Thursday, Dec. 22, 2016 after being stuck under a streetcar.

A scrappy dog named Nero has a Toronto veterinarian, her colleagues and some firefighters to thank after it was hit by a streetcar and trapped under the vehicle.

Karissa Ali, who works at a clinic in Toronto’s east end, was working Thursday morning when she heard that a streetcar had struck a dog nearby. She quickly rushed to the scene with a few colleagues in tow.

“My technicians and I all dropped to our bellies and kind of tried to work under there to see where he was trapped,” Ali told CTV Toronto.

Rescuing the dog became a group effort as fire crews arrived at the scene to help the scared pooch.

“We worked with the TTC to make sure that the streetcar had been isolated and that it was safe to proceed, and then we managed to get under and retrieve the dog,” said Toronto Fire Capt. Dan Trombley.

After about 10 minutes, Nero was coaxed out from underneath the car and brought back to Ali’s clinic, where the vet administered some X-rays and blood work. The dog was found to have minor injuries, but appeared to grow more anxious.

“At first he was actually very calm when we were able to pull him out from under the streetcar and bring him into the clinic, and then as the day wore on we could see that he was kind of growing afraid,” Ali said.

The dog, which was adopted from Israel in August, has since returned back home to his owners, where he is resting.

With files from CTV Toronto