A pair of orange fireballs streaking across the dark horizon. A mysterious object crashing into Lake Winnipeg. A nighttime visit from a “being with blonde hair and blue skin.”

These are among 1,267 reported UFO sightings across Canada in 2015, the second-biggest year for unexplained alien activity in the last 30 years.

The detailed Canadian UFO Survey released Monday by the Winnipeg-based group Ufology Research includes accounts of where, when and precisely what Canadians claim they saw in the sky last year.

The trove of strange stories includes dozens of unexplained lights, aircraft shaped like discs and diamonds, silently hovering UFOs and a few close encounters of the third kind.

In one case from Quebec, someone reported seeing three short “humanoids” with heads too big for their bodies and “big, black slanted eyes.” They then heard a high-pitched hum and woke up the next morning.

The stories may sound unbelievable, and researchers admit that many don’t hold up. Only about 12 per cent of the reports were classified as “unexplained.”

“The ridicule factor is quite certainly there, but we’re not saying the little grey guys are here. This is simply what people are reporting,” Winnipeg-based UFO researched Chris Rutkowski told CTV News Channel on Tuesday.

The data was collected from 17 sources across the country including Transport Canada, Canada National Defense, the National UFO Reporting Center and YouTube.

The only year with more UFO sightings than 2015 was 2012. Researchers believe that may have related to reports of a supposed “end-of-days” phenomenon from the Mayan calendar.

“We do know that the UFO reports continue to be made in growing numbers every year and this is just indicative that people are paying attention to what is in the sky. They’re not just looking down at their cellphones,” Rutkowski said.

Quebec led the country with 35 per cent of all UFO reports in 2015 -- a notable jump from previous years when that figure wavered between five and 15 per cent.

“It could be (that) the media are a little more attentive to the UFOs in Quebec,” Rutkowski said.

Alberta, Saskatchewan, Manitoba, Nova Scotia and Newfoundland all had an increase in UFO sightings in 2015. In terms of major Canadian cities, Montreal had the most reports with 97, with 78 sightings in Toronto and 69 in Vancouver.

The average sighting lasted about 16 minutes.

Ufology Research has collected the reports on a yearly basis since 1989. Since then, they’ve compiled 16,905 sightings.

By and large, Canadians mostly reported seeing strange lights in the night sky. They came in a variety of colours (pink, orange, “brilliant white”) and shapes (orbs, triangles), and some moved in curious zigzagging or stop-and-go patterns.

The data becomes particularly strange is in several isolated reports of one-on-one contact with alien beings.

In Montpellier, Que., a “humanoid” reportedly approached a house after lights were seen. In Kentville, N.S., an alien reportedly entered a person’s bedroom and held their shoulders. In Oshawa, Ont., someone reported being abducted aboard a spaceship (a note indicates “photos that don’t show anything.”)

In an attached essay on the data, researchers ponder what, if not proof of alien life, underlies the eyewitness reports.

“Is this phenomenon psychological, sociological, cultural, and/or physical? Is it our contemporary culture’s storytelling? Is it our collective psychological and social mythology generating what myths have generated since ancient times, answers to our desires, visions of our nightmares, and insights into what our future may hold? Or is the phenomenon something else? Physical objects created by our species or another form of life we cannot begin to understand?” 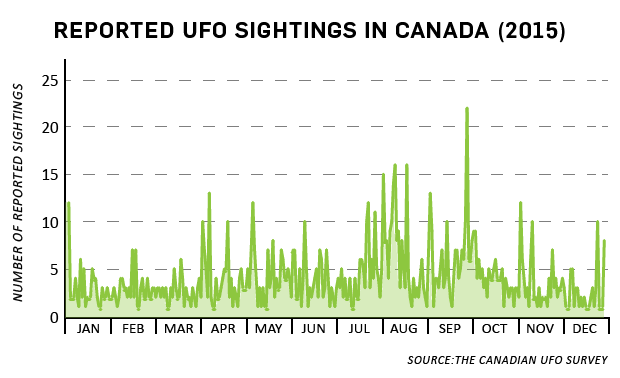 The steadily rising reports of UFOs could be linked to several factors: the popularization of drones, camera phones, laser pointers, at-home strobe lights. But Rutkowski suggests that the increase likely relates to the country’s collective curiosity.

“People are more interested. I think other people will talk to each other at a party or in school or university, and these are the types of topics people are interested in,” he said.

He added that, as writers like Stephen Hawking continue to pen popular books on outer space, humankind will continue to question the existence of extra-terrestrial life.

“Because space is so much in the public eye, I think people are paying a little more attention to the possibility that we are not alone.”

With files from Jesse Tahirali