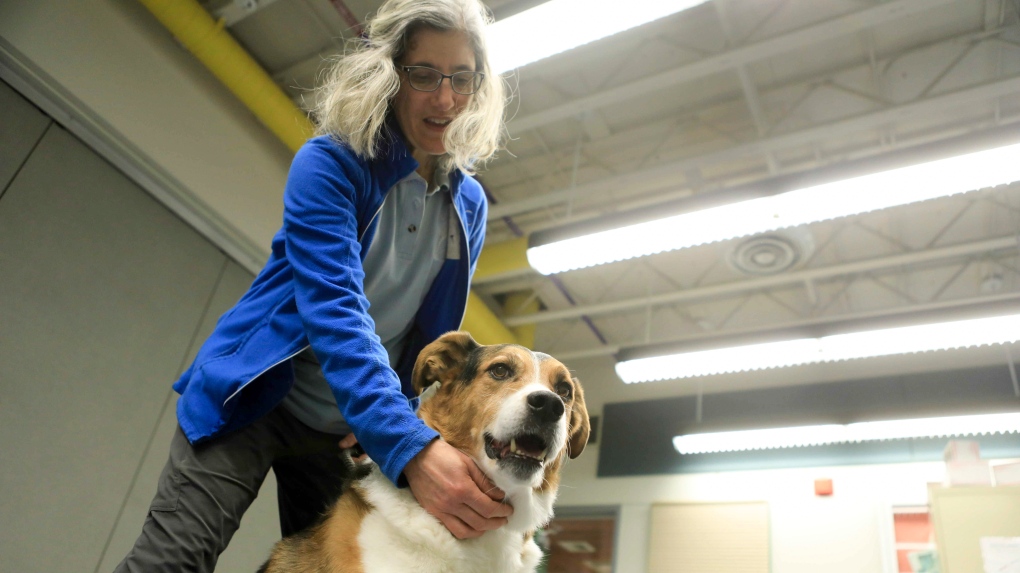 Laura Atwood, public relations coordinator for Anchorage Animal Care and Control, demonstrates how to touch a dog to whom a person has just been introduced by petting Riley, a mixed-breed dog, below its chin. (AP Photo/Dan Joling)

TORONTO -- A new study from the University of Guelph found that dog bites are more common among people who live in urban areas compared to those living in the country.

Experts found that six per cent of households in rural areas had at least one person bitten by a dog in the previous year, versus nearly 11 per cent of urban households. Jan Sargeant, who conducted the study, says the majority of bites came from unleashed dogs, and a high percentage (nearly 17 per cent) of the bites were from dogs that were not vaccinated against rabies.

“In Ontario, dogs three months of age or older are legally required to be vaccinated against rabies,” Sargeant said in a statement. “These findings will not only help shape public health measures related to preventing dog bites, but also bring awareness to the need for the rabies vaccine.”

A 10-year-old girl was sent to the hospital back in June after she and another woman were bitten by what police described as a “large dog” running loose in a Calgary neighbourhood. Bylaw officers later impounded the dog.

A similar incident occurred a month later, when two dogs were removed from a Brampton, Ont. home after a 70-year-old woman suffered serious injuries from an attack.

According to the study, nearly 60 per cent of all dog bites occurred while the victim was playing with or interacting with the dog. More than three-quarters of biting dogs were unleashed.

Danielle Julien, an epidemiology student who also worked on the study, says that the research was set out to examine the difference between urban and rural communities when it comes to numbers of dogs, dog ownership dynamics and human exposure to dog bites.

“All are important considerations in the planning and implementation of public health strategies related to zoonotic disease awareness, prevention and control, and for the promotion of responsible dog ownership,” Julien said in a statement.

“Some of the more important concerns surrounding the issue of dog bites include the repercussions of physical and emotional trauma experienced by bite victims, and less commonly, though no less importantly, the potential risk of transmission of the fatal, yet vaccine-preventable zoonotic disease, rabies,” she added.

According to Health Canada, the main carriers of rabies in North America are foxes, skunks, raccoons and bats that are capable of transmitting an infection to pets and people.