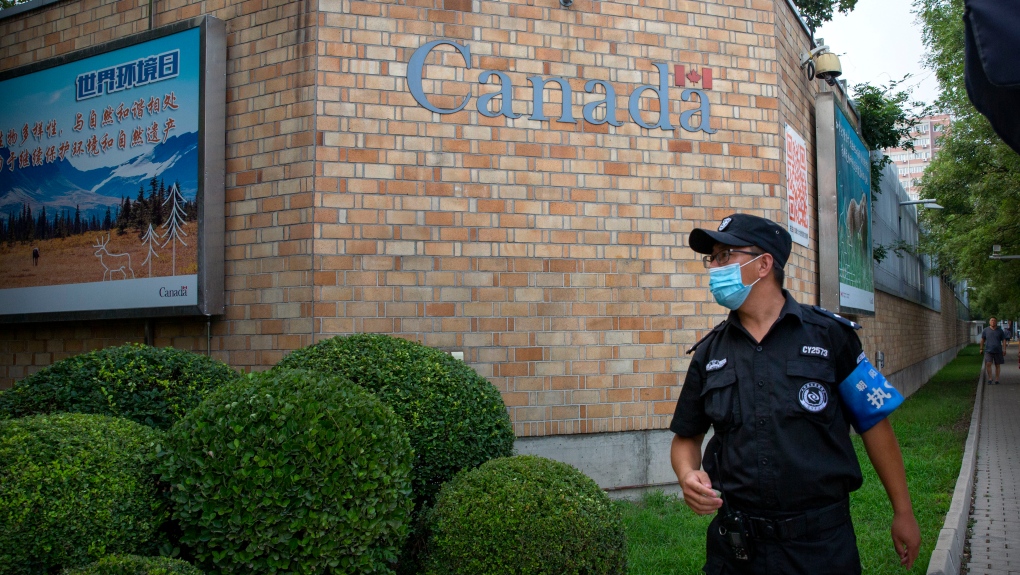 A security officer wearing a face mask to protect against the coronavirus stands outside the Canadian Embassy in Beijing, Thursday, Aug. 6, 2020. (AP Photo/Mark Schiefelbein)

BEIJING -- China has sentenced a fourth Canadian citizen to death on drug charges in less than two years following a sharp downturn in ties over the arrest of an executive of Chinese tech giant Huawei.

Ye Jianhui was sentenced Friday by the Foshan Municipal Intermediate Court in the southern province of Guangdong. Ye had been found guilty of manufacturing and transporting illegal drugs, the court said in a brief statement.

Another suspect in the case was also given the death penalty and four others sentenced to between seven years and life in prison, it said. Death sentences are automatically referred to China's highest court for review.

Ties between Canada and China have nosedived over Canada's late 2018 arrest of Meng Wanzhou, a company executive and the daughter of Huawei's founder, at Vancouver's airport at the request of the U.S., which wants her extradited to face fraud charges over the company's dealings with Iran. Her arrest enraged Beijing, which calls it a political move aimed at constraining China's rise as a global technology power.

Ye's sentencing came a day after fellow Canadian Xu Weihong was given the death penalty by the Guangzhou Municipal Intermediate Court, also in Guandong province. Convicted Canadian drug smuggler Robert Schellenberg was sentenced to death in a sudden retrial shortly after Meng's arrest, and a Canadian citizen identified as Fan Wei was given the death penalty in April 2019 for his role in a multinational drug smuggling case.

The court statement gave no further details of the charges against Ye and the others. However, the website of the Yangcheng Evening News based in the neighbouring metropolis of Guangzhou said Ye and co-defendant Lu Hanchang conspired with others to manufacture and transport drugs between May 2015 and January 2016.

Police seized roughly 218 kilograms (480 pounds) of white crystals infused with the designer drug MDMA from a room used by the two, and found another 9.84 grams of the drug in bags and residences used by Lu and others, the newspaper said.

China, like many Asian nations, hands out harsh punishments for making and selling drugs, and the country's rising wealth and transformation into a centre for world trade has attracted growing numbers of foreigners to its domestic market for illegal substances.

In December 2009, Pakistani-British businessman Akmal Shaikh was executed after being convicted of smuggling heroin, despite calls for clemency on the grounds that he was mentally disturbed.

China is believed to execute more criminals each year than all other nations combined. Although the actual figure is a state secret, estimates put it at around 2,000.

"This case should not inflict any impact on China-Canada relations," Wang said.