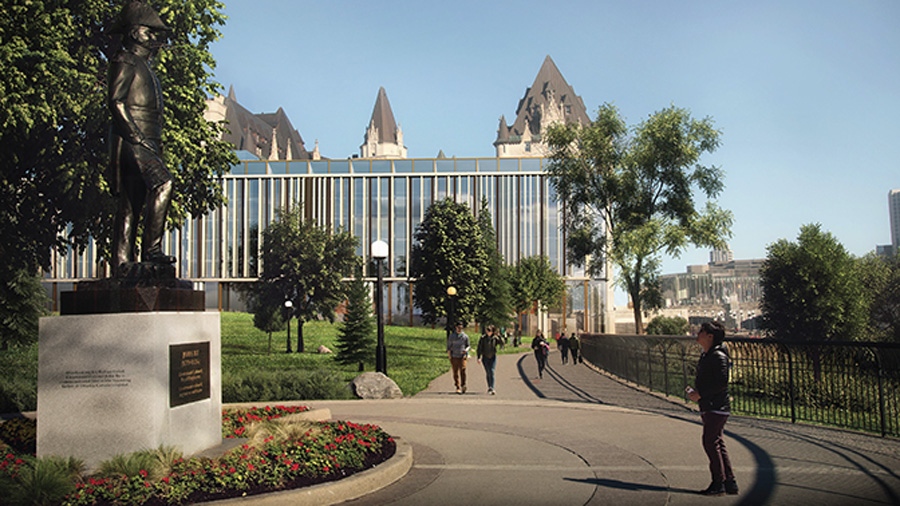 An image of the proposed seven-storey addition at the rear of the Chateau Laurier.

OTTAWA -- A preservation society is blasting the redesign of an addition to Ottawa's stately Chateau Laurier hotel as "heritage vandalism," but the lead architect on the project says a contemporary approach is the best way to protect the property's history.

Heritage Ottawa fired yet another salvo this week in its ongoing campaign to prevent the proposed glass and metal structure from moving forward at the national historic site.

"Heritage Ottawa remains unimpressed -- and is gravely concerned that the City of Ottawa may be on track to approve what would be the most disgraceful act of heritage vandalism of our generation," the organization said in a statement Sunday.

Leslie Maitland, who co-chairs the organization, welcomed some of the modifications in the latest revision of modernist design, which has faced intense backlash since it was first unveiled in late 2016.

The most recent iteration reduces the addition's height to seven stories in order to preserve views of the hotel, according to the City of Ottawa's website, and has also added limestone accents.

But Maitland said the changes aren't enough to overcome the structure's fundamental clash with the chateau's "picturesque" sensibility.

"They come up with several iterations, but they're basically all versions of a glass box stuck onto this magnificent, Edwardian chateau," she said in an interview Tuesday. "They can't even think outside the box."

Peter Clewes of Toronto-based firm architectsAlliance, who is the lead architect on the project, said he shares Heritage Ottawa's admiration for the hotel's whimsical style, but they starkly diverge in their views of the most effective strategy to preserve the property's heritage.

"We're trying to do a building of our time, and we don't want to confuse the cultural history of Ottawa," Clewes said. "We certainly don't want to demean the hotel in any way."

Clewes said designing a structure in the same style of the hotel would likely amount to ahistorical mimickry, and could create confusion about what elements of the property are new, and what has been there for more than a century.

"When you're dealing with a building of national historic significance, you don't want to confuse history," he said. "Our focus has been trying to create a building that's deferential to the hotel, and allows it a clear legibility of the hotel itself -- what is historic and what is new."

The architect said the public criticism of the project has at times been hurtful, but the process of consulting with stakeholders, government officials and citizens has ultimately influenced his team's designs for the better.

Ottawa City Council is slated to discuss the project later this month.

-- By Adina Bresge in Toronto