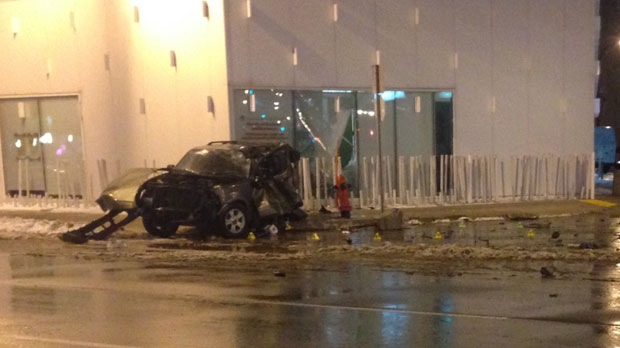 A 27-year-old woman died as a result of her injuries in the crash on Portage Avenue.

WINNIPEG -- Charges have been laid against the survivor of a crash that occurred during a police chase of a suspect vehicle in Winnipeg.

Police have also identified Brandi Melissa Manningway, who was 27, as the driver who died in the crash.

Officers were pursuing a vehicle early Monday morning that they believed had been involved in a commercial robbery.

Investigators say the SUV's driver lost control during the high-speed chase and struck a building at a downtown intersection.

Manningway was taken to hospital, where she died, and her male passenger fled on foot but was arrested nearby.

Matthew Alexander Bartlett, who is 30 and from Winnipeg, faces more than a dozen charges, including four counts of robbery with a weapon.

The province's independent investigation unit has been brought in to review what happened.

A light standard, a parking meter, some tree branches, glass and other debris from the sidewalk were strewn throughout the block where the SUV smashed into the building.

Police have said it's lucky no one else was hurt.