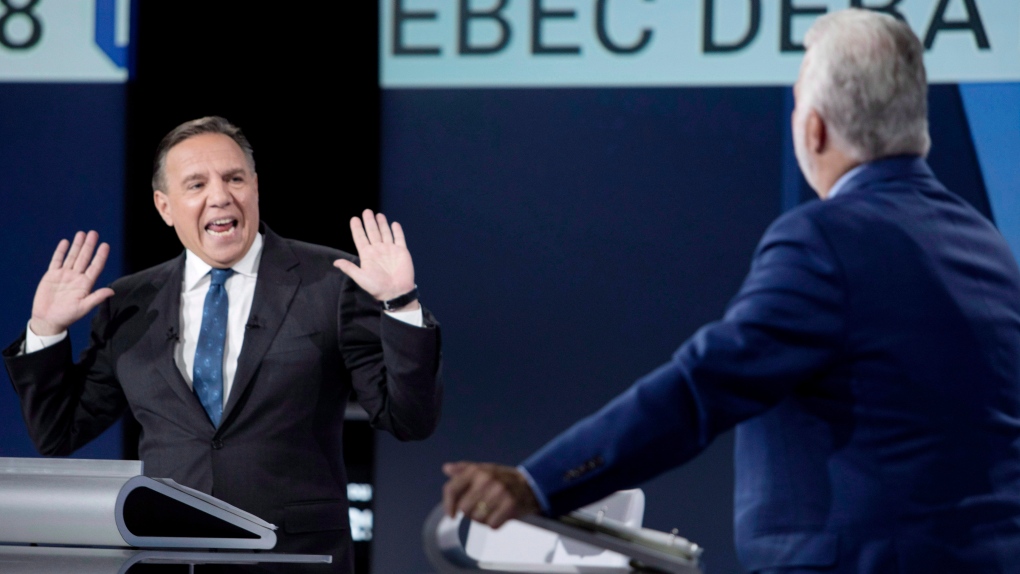 MONTREAL -- Quebec's party leaders criss-crossed the province on Saturday, urging their supporters to show up and cast their ballots as the 39-day election campaign entered its final weekend.

"People have to go out and vote massively," said Coalition Avenir Quebec leader Francois Legault, who warned that a low turnout could turn the tides in favour of his Liberal opponents.

Legault, whose formerly front-running party is now neck-and-neck with the Liberals in the polls, still expressed hope for a majority government.

"We will have a (Coalition) majority if people vote massively," he repeated during a visit to an apple orchard in Compton, in Quebec's Eastern Townships.

Meanwhile, new polls from Ipsos, Leger and Le Journal de Montreal put the Coalition and the Liberals within one or two points of each other ahead of Monday's vote.

However, the Leger poll contained good news for Legault when it comes to support among French-speakers.

Speaking in the Quebec City area, Couillard suggested Legault couldn't be a true nationalist since he didn't have a cultural policy and had expressed support only "belatedly and softly" for Canada's supply management system.

"When you say you're nationalist, and you don't talk about Quebec culture, you don't find that a problem?" he said.

Meanwhile, Parti Quebecois Leader Jean-Francois Lisee was working hard to convince voters that casting a ballot for his third-place party was a safe bet.

"There's no risk with the Parti Quebecois, because there won't be any cuts in education, no cuts to health, for seniors," he told supporters in Terrebonne, north of Montreal.

Although his party is polling below 20 per cent, the 60-year-old Lisee noted that many voters make up their minds at the last minute.

He jokingly told his supporters not to go to bed until each had found two or three undecided voters and won them over.

Quebec solidaire, which gets much of its support from 18-to-34 year olds, was also working to get the vote out, seeking to ensure its recent bump in the polls would translate into real votes.

"Go vote for the party that proposes the most serious plan to fight climate change -- the great challenge of my generation," implored Gabriel Nadeau-Dubois, the party's 28-year-old co-spokesperson.

With files from Stephanie Marin in Terrebonne, Que., Caroline Plante in Sainte-Charles-de-Bellechasse, Que. and Patrice Bergeron in Sherbrooke, Que.