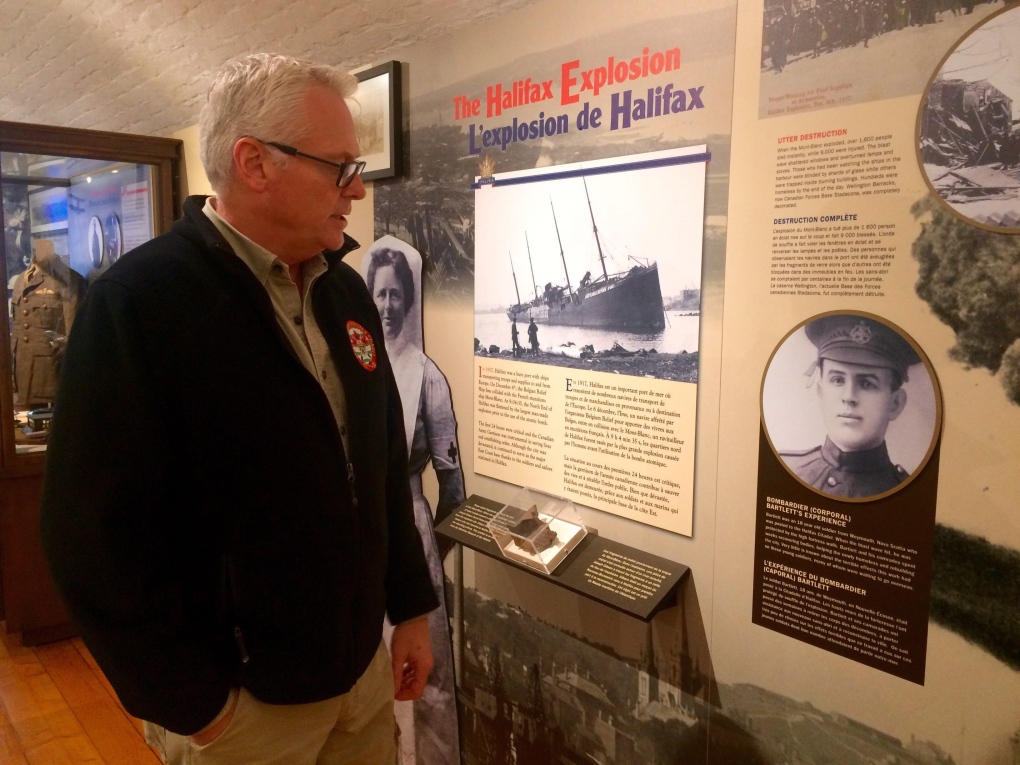 Ken Hynes, curator of the Army Museum at Citadel Hill, looks at a photo of his grandfather, Fletcher Manchester Bartlett, who was working at Citadel Hill at the time of the Halifax Explosion on Dec. 6, 1917. (Aly Thomson / THE CANADIAN PRESS)

HALIFAX -- Ken Hynes walked through the courtyard of Halifax's Citadel Hill on Sunday towards the exact spot his grandfather stood 98 years ago the moment two ships collided in the narrows of the Halifax harbour, causing a massive explosion that left part of the Nova Scotia capital in ruins.

Under partly cloudy skies, Hynes remarked that the weather was similar on Dec. 6, 1917, when the French cargo ship SS Mont-Blanc, loaded with explosives, collided with the Norwegian vessel SS Imo, creating the largest man-made explosion prior to the development of nuclear weapons.

Hynes, a retired army major and curator of the Army Museum at Citadel Hill, imagined his 18-year-old grandfather Fletcher Manchester Bartlett watching as a blast wave swept over the fortress near the harbour in the city's downtown, wondering if the Germans had attacked.

"I feel very close to him," said Hynes as a brisk wind swirled throughout the pebbled courtyard. "It's an eerie thing. If you just think about all those people and what was happening to their lives, it makes you feel lucky to be here on this peaceful, beautiful day."

Sunday was the 98th anniversary of the Halifax Explosion, which left roughly half the city's population -- 25,000 people -- dead, injured or homeless. A canon blast from Citadel Hill marked the exact time of the explosion at 9:04 a.m.

Hynes said it's important to commemorate the disaster, which killed 2,000 people and injured 9,000 others, so that it doesn't become lost in time.

"If we don't remember, the people will have died for nothing," said Hynes next to an exhibition at the museum detailing the disaster.

Hynes said the bow of the Imo stuck the Mont Blanc and ignited a fire onboard the ship, which was carrying barrels of benzol, TNT, picric acid and guncotton. The centre of the resulting explosion reached 5,000 C and the blast wave created a three-metre tsunami that further damaged Halifax's shoreline.

A fragment of the hull of the Mont Blanc is on display at the museum, as well as a rifle that was found by a citizen in the debris after the explosion.

Hynes said pieces of the French ship were discovered nearly five kilometres from the site of the explosion. The Imo surprisingly was not destroyed, but was blown across the harbour and was later refloated and sailed for years after the First World War, said Hynes.

Halifax's north end was reduced to rubble and windowpanes were blown out across the city, he said. It was more than two months before some people could return to their homes, and many people did not have homes to return to, said Hynes.

"It's a big story in our city's history, and sometimes people don't understand or realize how devastating it was to this whole municipality," said Hynes.