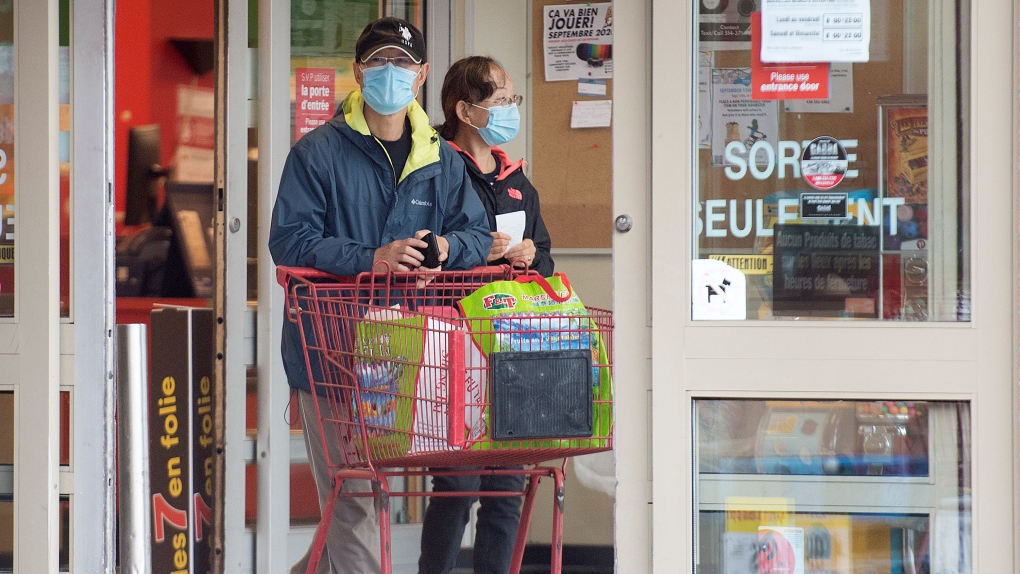 People wear face masks as they leave a grocery store in Montreal, Sunday, Sept. 13, 2020, as the COVID-19 pandemic continues in Canada and around the world. THE CANADIAN PRESS/Graham Hughes

TORONTO -- Canadians who have suspected their grocery bills have been rising over the years aren’t imagining it, according to a new report that found the price of food has been steadily increasing in the last decade – and the COVID-19 pandemic is only accelerating this trend.

According to the report, which was released on Tuesday by Dalhousie University’s Agri-food Analytics Lab, the price of a typical grocery basket has increased by approximately 240 per cent since 2000.

While it’s expected the price of food will go up because of inflation, Sylvain Charlebois, a professor and senior director of the lab, said his team wanted to see how the food price index compared with the general inflation index or Consumer Price Index (CPI) over the past 20 years.

“The point of the report is to show that really over the last 10 years, at least, the food inflation rate has outpaced the general inflation rate,” he explained during a telephone interview with CTVNews.ca on Tuesday.

The report found that the overall cost of other products and services in the economy didn’t increase as much as food did during this time period.

Charlebois said the rising cost of food is actually the result of the agri-food industry playing “catch up” after a generation of discounted products.

“North America has been the realm of discounted food for quite some time. We are just coming out of an era in which we have been bent on buying the cheapest food products,” the report stated. “But things are different now.”

The researchers said consumers have more choice than ever now and because of that, they expect more innovation and quality when it comes to their food.

“There is certainly a price to pay for that. As a result, the industry has been catching up to our expectations by managing higher costs and passing some of the increases onto us,” the report said.

Charlebois said he expects the COVID-19 pandemic will accelerate the pace of these food price increases because operation costs have gone up during the health emergency.

“We actually are expecting the average household in Canada to spend not just 9.1 per cent of their budget, but maybe 10.5, perhaps even 11 per cent,” he said.

While the report found that every province and territory have had their consumer price indices outstripped by the food price index, some regions have seen more of a disparity than others.

Charlebois said households in Eastern Canada have had to spend more of their budgets on food than in other areas due to a lack of regionally based food processing and the higher logistical costs of serving some remote markets.

New Brunswick saw the biggest gap between the food price index and the general price index at 25.8 points, followed by Quebec (23.1 per cent), and Nova Scotia (21.3 per cent).

“It is especially in the last decade that the gap between the two indices has widened,” the report said.

To avoid food insecurity from the rising costs, Charlebois said he would like to see governments invest in controlled environment agriculture, greenhouses to produce food all year round, and increases in the processing capacity in the most affected regions.

While the rising cost of food may be unwelcome news for most Canadians, Charlebois said there are still several food items that appear to be impervious to the increases.

According to Statistics Canada, white sugar is almost the same price as it was 20 years ago in 2000 at $2.40 per two kilograms.

“Although there are only three sugar producers in Canada that control the market, Redpath, Lantic and Rogers in the West, the price of sugar has barely changed in the last two decades,” the report said.

Flour, too, has also remained fairly cheap, Charlebois said, with only a 38 per cent increase over the past two decades.

There has been even less of an increase in price for peanut butter over the years, according to Charlebois. He said peanut butter is only 5 per cent more expensive now than it was in 2000.

“I think it has a lot to do with competition,” he said. “The fact that there are a lot more brands and it's been a little bit more competitive.”