VANCOUVER -- C.J. Pentland has made it a tradition to celebrate New Year's Day by experiencing the chilly waters of the Pacific Ocean.

Every year, the 24-year-old and his family and friends dress up as Santa and his reindeer, and join thousands of others in Vancouver's polar bear swim.

"There's no better way to ring in the New Year, I think," said a soaking Pentland, homemade antlers atop his head.

His dad, John Pentland, stood in the surf wearing a wet Santa costume, complete with a hat and white beard, and said the polar bear swim is simply tradition for the family.

"It's more important than New Year's Eve. This is what gets us going for the year," he said.

The oldest Polar Bear Club in the country was founded in 1920 in Vancouver, and since then the frosty tradition has since spread across the country.

The Vancouver event remains the largest, however, attracting a record-breaking 2,500 people in 2014.

This year, nearly 2,000 people registered for the swim, but there were even more who jumped in the water -- possibly enough to set a new record, said Sarah Kirby-Yung, chairwoman of the Vancouver Park Board.

"The energy down here is fantastic, and that's kind of what brings people together," she said.

While some opted to wear their traditional bathing suits, others were clad in costumes, pyjamas or brightly-coloured wigs.

Ken Hamilton sported a hat covered with his pins from previous polar bear swims and a red "40" headband to celebrate the decades he's been attending the event.

He started in 1976 "just for fun" and now rents a bus to bring his friends and family in from Surrey, B.C.

"We used to have a small bus and now we have a bigger one," said Hamilton, who came with about 30 others this year. "It just gets better and better every year."

It was a bright, sunny afternoon under a cloudless sky and with the water was a balmy temperature of about eight degrees, Hamilton said it was one of the warmest swims yet.

Canadians taking the plunge elsewhere in the country weren't as lucky.

In Oakville, Ont., Olaf the snowman, Santa Claus and at least one Star Wars storm trooper were among the 800 to dive into Lake Ontario.

Jenna Courage has done the dip at least 10 times -- but said she never gets used to the cold. She and a friend jumped up and down to keep warm, as snow fell around them, before they ran into the water.

Her father, Todd Courage, helped found the Oakville dip 31 years ago, and he's participated every year since then.

For the past 20 years, he and his brother have partnered with World Vision Canada. Swimmers donate money to register, this year raking in $130,000 to bring clean water to Rwanda.

In Herring Cove, a small community outside of Halifax, N.S., 81-year-old Ernie Ross was first into the water, wearing salmon-coloured swimming trunks with the phrase "Happy 2016" written across his chest in black marker. About 130 others followed behind.

Organizers estimate 250 swimmers -- one wearing a lab coat and riding a boogie board -- entered the water during a polar bear dip at Britannia Beach in Ottawa, as cross-country skiers made their way through a nearby park. 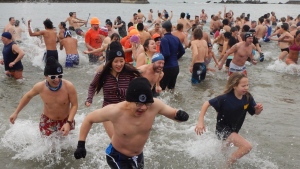