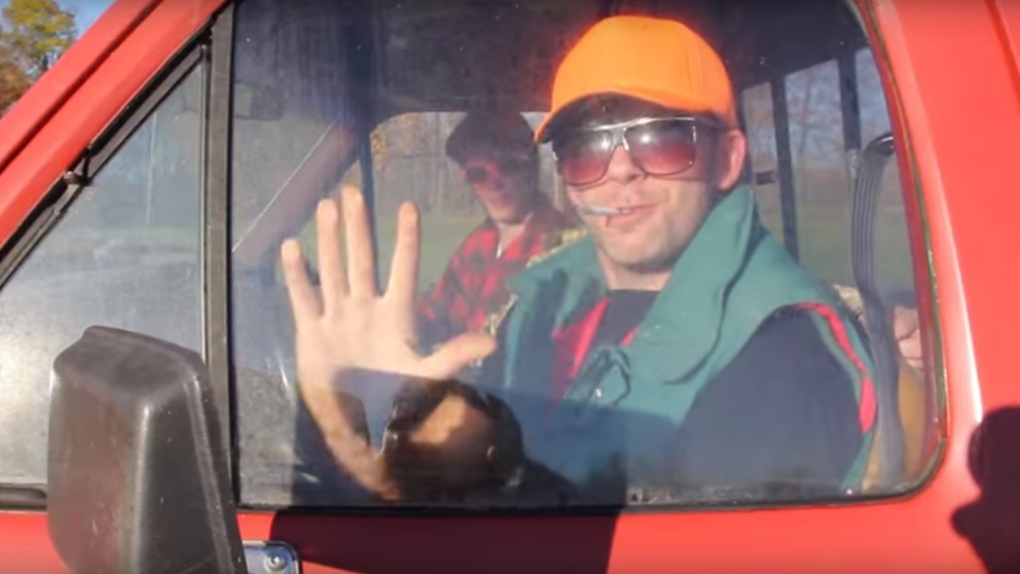 Canadian rapper B. Rich is shown in this still image from the YouTube video for 'Out for a Rip.'

TORONTO -- Brendan Richmond created a viral sensation with his hoser comedy song "Out For a Rip" in 2013, but he was shocked to recently find his popular catchphrase gracing the side of a Coca-Cola bottle.

He's now released a followup song, titled "Out for a Sip," calling out the beverage corporation for using his trademarked phrase without permission.

The new video features his rapper persona B. Rich recalling how he discovered the unauthorized usage of "Out For a Rip," with fans across Canada sharing images of Coke bottles labelled with the phrase.

"Out for a Sip" also features Richmond's Toronto-based intellectual property lawyer Rob Kittredge -- playing the role of lawyer John Buddy -- as he meets to discuss B. Rich's legal rights.

Kittredge said he's "old friends" with the performer and they agreed that making a video would be a fun idea.

"I don't have a lot of clients for whom this would be an appropriate response," Kittredge said in an interview.

"We had the opportunity to do something totally creative and my job is boring, so this is an unusually fun way to write a demand letter for me."

Kittredge declined to say whether he's heard from Coca-Cola representatives, while the company itself did not immediately respond to a request for comment.

Near the end of "Out for a Sip," B. Rich tells the company he'd be happy with a settlement that includes a truckload of Coke dumped on his front lawn, tickets to the Toronto Maple Leafs and Toronto Blue Jays, and a new pair of skates.

The musical threat of litigation has already gathered more than 42,000 views as of Wednesday afternoon.