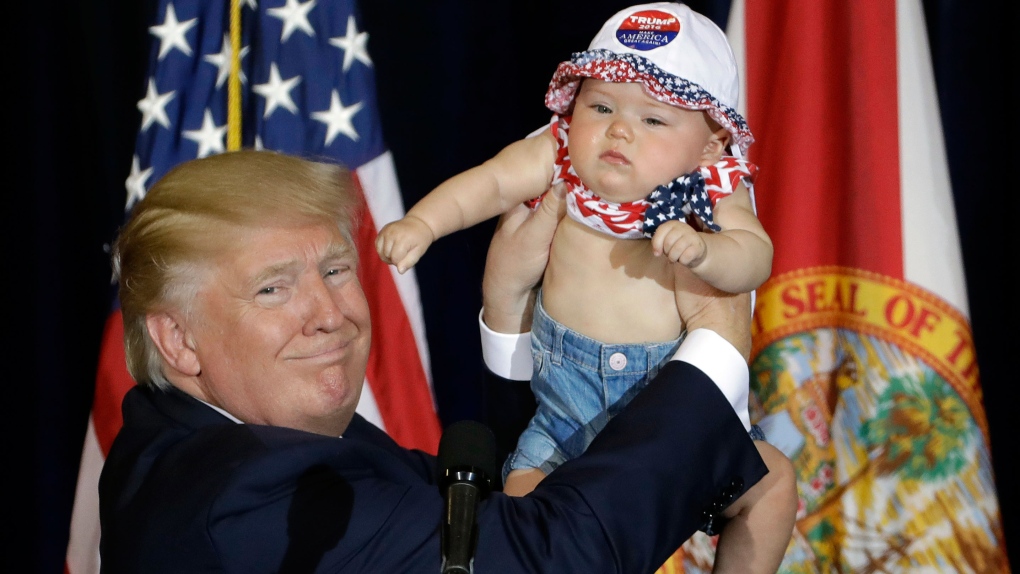 TORONTO -- The incendiary U.S. election is proving to be a challenging teachable moment for some Canadian parents struggling to explain the surprising results to their curious children.

But at least they can comfort their youngsters with the fact they live in a country that has embraced much different values than the divisive ones that marked the U.S. campaign, says Oakville, Ont., dad Jason Little.

The morning after America elected Donald Trump as its next president, Little says his nine-year-old daughter stunned him by asking whether the Republican leader would start a world war.

"I only cared about baseball at that age. It's just really a hard conversation to start," says Little.

His daughter had been following Hillary Clinton's bid to become the country's first female president, and while she wasn't discouraged by her loss, she was feeling "disappointed, sad, angry, all at the same time."

In her concession speech, Clinton seemed to acknowledge the potential impact of her defeat on young girls who might be demoralized by the vote.

"To all the little girls how are watching this: Never doubt that you are valuable and powerful and deserving of every chance and opportunity in the world to pursue and achieve your own dreams," she said.

Trump's bewildering victory caught many by surprise -- pollsters, political pundits and even many prominent Republicans who dismissed the possibility that the former reality TV star and real estate mogul could harness broad support, especially as scandal after scandal mounted.

It was an especially polarizing campaign given Trump's oft-coarse posturing that included a litany of offensive comments about women, Muslims, Mexicans and immigrants; comments that would get any school kid sent to the principal's office.

It's tempting, then, for any child to view his win as a sign that bad behaviour is rewarded, says York University education professor Carl James.

But that also makes this a great time to talk to children about the hard fact that discrimination exists and can be pervasive.

"It comes back to training my child to understand: This is how inequity exists in our society and this is how I'm going to prepare you to respond to those inequities," says James, whose expertise includes youth studies, multiculturalism and race relations.

Political science Prof. Brian Bow of Dalhousie University agreed, adding it would be irresponsible to suggest visible minorities in Canada don't have to worry about the kind of racial hatred that surrounded Trump's campaign.

The father of two girls can understand how young women especially might feel demoralized by Clinton's failed bid.

"The most important thing is to try to maintain a certain perspective on it all -- there are always setbacks on the path to making things better. That's part of the reason people have to not be complacent and engage with those things and not be too discouraged when they happen, because it is a fight to make things better."

Little says his kids were colour blind until they learned of Trump's vow to ban Muslims from entering the United States and his plan to build a wall to prevent immigrants from illegally crossing the border with Mexico.

He and his wife tried to emphasize their belief that people are generally good, despite the misogyny, xenophobia and racial hatred that marked Trump's campaign.

He assured his daughter and 11-year-old son that there would be enough people around Trump to prevent anything bad from happening, but admits his kids are exposed to a surprising amount of political hyperbole thanks to chatter at school and the YouTube stars they follow.

"They hear all the bad things magnified about him," says Little.

Toronto-based parenting coach Terry Carson says the message to kids needs to be: "A bully is a bully no matter who he is, even if he's the president of the United States."

"Our job as parents is to help our children manage social situations and get along with classmates and little friends on the playground or cousins or brothers and sisters," she says.

Little says they haven't shielded their kids from the news, even though the U.S. campaign was especially nasty and demeaning. If anything, that helped highlight how different politics are in Canada.

"A year ago we watched the election with (new Prime Minister Justin) Trudeau and they love him. Just to see the difference in the reaction and the coverage I think is comforting," he says.

"They know we're kind of a nice country. We just keep reinforcing the same thing: Respect people, people have their opinions, they're entitled to their opinion."