Canadian minimum wage workers say they're surviving rather than living 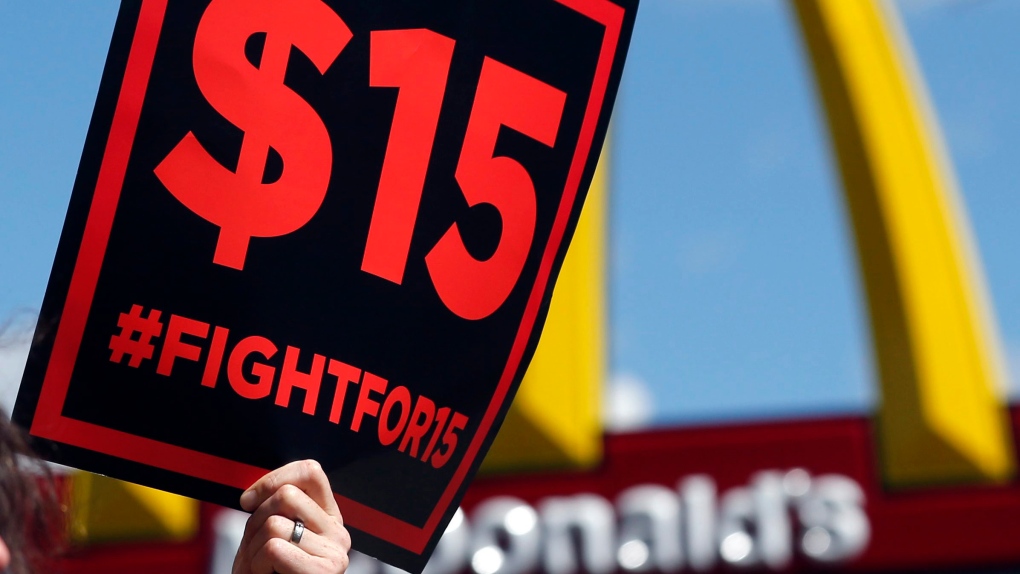 In this July 22, 2015 file photo, supporters of a $15 minimum wage for fast food workers rally in front of a McDonald's in Albany, N.Y. (AP Photo/Mike Groll)

She managed to save enough money to buy second-hand garments, only to find they'd already been snapped up by the time she made it back to the thrift store.

Keriti, a 39-year-old Toronto resident, said she struggles financially despite the fact she is employed.

She's one of a number of low-wage workers who have trouble making ends meet and who believe Canadian provinces need to raise the minimum wage to $15 an hour.

While Alberta has pledged to raise the minimum wage to $15 by October 2018, others have declined to follow.

Quebec will raise its minimum wage to $11.25 from $10.75 on Monday -- a hike Keriti and several other workers interviewed by The Canadian Press say is insufficient.

Keriti doesn't have a steady job, surviving instead on short-term painting and construction jobs.

She says she sometimes arrives at a job site only to be told there isn't any work for her, meaning she and her partner live in constant insecurity.

"At the moment I have nothing permanent in my life because I don't know how much money I will make in the next month and how much I will be paid," she said in a phone interview.

Mathieu Proulx, who earns $13.50 an hour as a maintenance worker in Montreal's Old Port, says he sometimes feels like he's surviving rather than living.

"You're always waiting for the next cheque," said Proulx, 43." As soon as there's an unforeseen (expense), everything becomes unbalanced."

In his small apartment in the Hochelaga-Maisonneuve district, a bass guitar sits unused in the corner. Proulx explains it's broken and that he can't afford to fix it.

The situation can become even more serious when health problems strike.

Golaeh Gaffari, a 40-year-old from Coquitlam, B.C., says she worked at a Tim Horton's for five years before getting hurt.

Now unable to work, she doubts she and her husband will be able to stay in the one-bedroom apartment they're renting for $900 a month.

Gaffari says prices have gone up significantly since she immigrated from Iran in 2008, while wages have stagnated.

"Everything is going right up: transportation, rent, groceries," she said. "Everything is being raised and nobody complains about it. But minimum wage, no."

Even workers who don't have to pay B.C.'s sky-high rental prices say they have trouble making ends meet.

Jonethan Brigley, who works at Dalhousie University in Nova Scotia, says about half his monthly budget is taken up by the $591 he pays in rent.

The 29-year-old believes raising the minimum wage would be "a start" but should be followed by other measures such as stabilizing rental prices.

While the so-called "Fight for $15" has its defenders, experts remain divided over whether the measure would have a positive impact on workers.

One economist, Pierre Fortin, believes minimum wage needs to be evaluated within the greater context of salaries in the region -- meaning provinces shouldn't necessarily follow the $15 minimum wage movement begun in the United States.

He points out that the minimum wage in Quebec in 2016 was about 46 per cent of the overall hourly average, according to provincial government statistics.

In contrast, big American cities that have chosen to raise their minimum wages to $15, such as New York and San Francisco, have a ratio of only about 37 to 38 per cent, Fortin said.

Similarly, Fortin said Alberta's decision to phase in a $15 minimum wage can be justified by the fact salaries in the province are 30 per cent higher than a province like Quebec's.

Fortin warns that raising the minimum wage too fast or too high could result in thousands of fewer jobs and a higher school dropout rate. He thinks other measures, such as tax breaks, would be a better way of helping the poor.

All four of the workers interviewed by The Canadian Press strongly disagree.

"Employers always want to make more profits," Keriti said. "Saying (raising the minimum wage would cost jobs) is a lie, it's the excuse they use not to raise salaries."

Proulx believes a higher minimum wage would benefit the local economy by giving workers the ability to buy things they currently can't afford.

He says workers need a stable income all year long, not just a break at tax time.

"(Our) needs are every month and every week," he said. "If my dryer breaks, I can't wait until May when I'll get my tax refund."

A look at hourly minimum wage in Canada's provinces and territories:

Canadian minimum wage workers say they're surviving rather than living