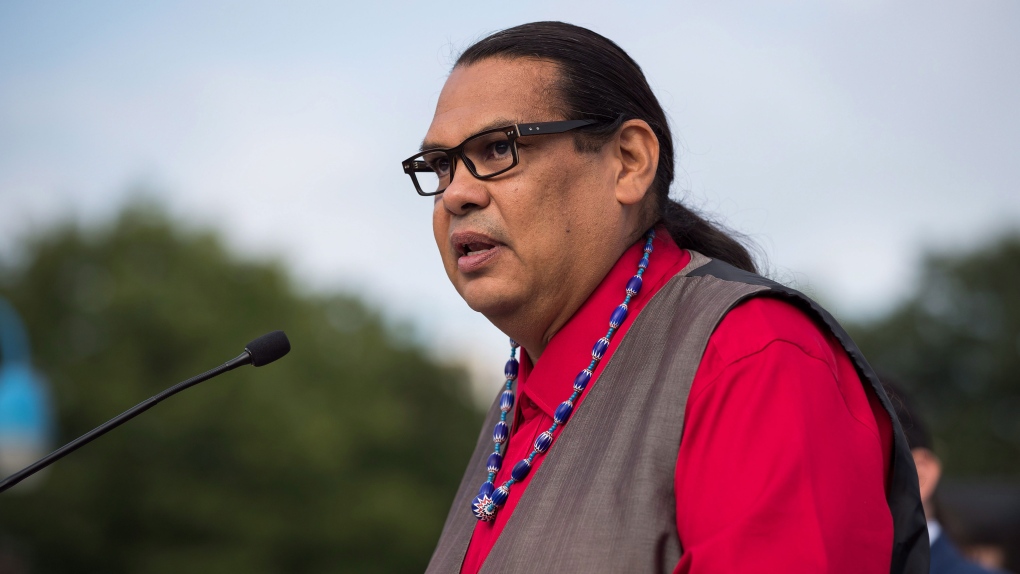 Rueben George, Project Manager for the Tsleil-Waututh Nation Sacred Trust Initiative, responds to a Federal Court of Appeal ruling on the Kinder Morgan Trans Mountain Pipeline expansion, during a news conference in Vancouver, on Thursday August 30, 2018. THE CANADIAN PRESS/Darryl Dyck

VANCOUVER -- Indigenous groups in Canada and the United States are calling for a study of how human activity has degraded the waters off British Columbia's coast before any new vessel traffic is allowed in the area where port and pipeline activities are on the rise.

Members of the Tsleil-Waututh Nation in B.C., and the Tulalip Tribes and Lummi Nation in Washington state say they want a halt to any more marine traffic in the Salish Sea while the impact study is complete.

"We're Coast Salish nations that have come together from both sides of the border with the United States and Canada to address this urgent issue that's happening to our Salish Sea," said Raynell Morris of the Lummi Nation.

Rueben George of the Tsleil-Waututh First Nation said the decline of salmon stocks and, in turn, the endangered Southern resident killer whales should be a wake up call to politicians on both sides of the border.

"To me it's like the canary in mines. The animals are going and its happening and it's not going to be too long before it's affecting all of us," George said.

The groups say fisheries, marine mammals, sacred sites and traditional economies are all threatened by new and expanding port facilities and they want the study to consider the cumulative change over time, not just the impacts of a single project.

They say they want a study that establishes a baseline for Salish Sea health and suggest 1985, when harvest levels were still "healthy." The Lummi Nation would also like to meet with federal Environment Minister Catherine McKenna on the topic, Morris said.

The groups did not rule out demonstrations if American and Canadian authorities refuse to conduct an interjurisdictional study, with Morris saying they would protect the land and sea, "by any means available and possible and necessary."

Fisheries and Oceans Canada and Environment and Climate Change Canada did not immediately respond to requests for comment.

The Indigenous representatives spoke during a break at an information session held by the Canadian Environmental Assessment Agency's review panel on the proposed Roberts Bank Terminal 2 project.

The project would see the construction of a new three-berth marine container terminal about 35 kilometres south of Vancouver in the water off Delta, B.C.

The Indigenous groups also expressed concern about the proposed Trans Mountain pipeline expansion, which would increase tanker traffic in the Burrard Inlet sevenfold.

The Federal Court of Appeal quashed the expansion project's approval in August in part due to the board's failure to consider marine shipping impacts.