Canada will have to rely on immigration as global fertility rate plummets: study 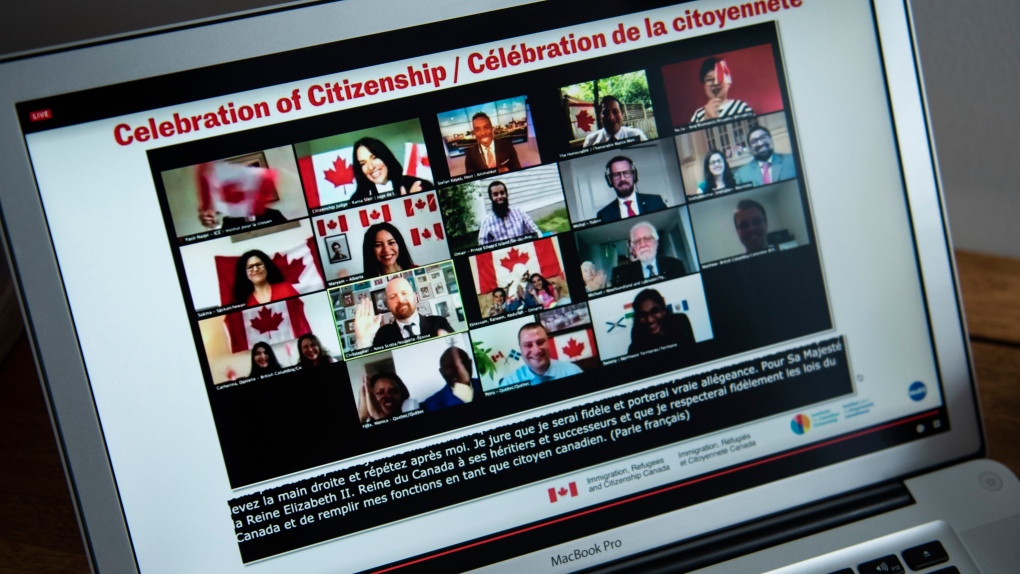 Participants celebrate becoming Canadian citizens after swearing the oath of citizenship during a virtual citizenship ceremony held over livestream due to the COVID-19 pandemic, on Canada Day, Wednesday, July 1, 2020, seen on a computer in Ottawa. (THE CANADIAN PRESS / Justin Tang)

TORONTO -- Canada's current openness to immigration must continue if the country wants to maintain one of the world's largest economies for the rest of the century, according to a new study projecting global population and economic trends between now and 2100.

The study, which was published Tuesday in The Lancet, primarily focuses on an anticipated decline in the world population as fertility rates fall in the second half of the 21st century.

It forecasts that the global population will peak in 2064 at 9.73 billion people. By 2100 – less than two generations later – that number will be nearly one billion lower, and nearly three-quarters of the 195 nations included in the study will not be producing enough children to maintain their workforces.

"Once global population decline begins, it will probably continue inexorably," the researchers behind the study wrote.

The study predicts that Canada's population will peak later in the century, at nearly 45.2 million in 2078, and fall slightly to 44.1 million by 2100.

According to the researchers, a declining population is "potentially good news" for the battle against climate change, but not enough on its own to save the planet from serious environmental effects.

Shrinking populations can also cause economic damage, as fewer people are available to work. One way to offset this is by accepting large numbers of immigrants to make up the difference, as Canada has been doing for decades.

The researchers expect Canada to become an even more prominent immigration hub over the next 80 years, forecasting us to have the world's highest net migration rate – immigrants minus emigrants – by 2100, ahead of Turkey and Sweden. This would happen despite the current "steady stream" of migrants drying up somewhat, as developing nations improve their education systems and quality of life.

All that immigration would see Canada replacing Russia as the world 10th-largest economy by 2030 and remaining there for the rest of the century, even as Nigeria and Australia bump Brazil and Italy out of the top 10, according to the forecast.

"The optimal strategy for economic growth, fiscal stability, and geopolitical security is liberal immigration with effective assimilation into these societies."

In countries where immigration is not used to maintain the workforce and GDP, the researchers wrote, governments may instead look to create incentives for parents to have more children, such as baby bonuses and paid parental leave. They warned that there is also a "very real danger" that "some states might consider adopting policies that restrict female reproductive health rights."

Not taking any action to maintain the size of the workforce could leave countries in a position where they have to significantly increase taxes or run the risk that health insurance and social security programs could collapse, the researchers said.

The study was funded by the Bill and Melinda Gates Foundation and carried out by researchers at the University of Washington.

NOT SET IN STONE

In addition to their overall projections, the researchers looked at what would happen if the worldsped up or slowed down its progress on meeting the United Nations' sustainable development goals (SDG) regarding female educational attainment and contraceptive need. "Many countries are not on track" to achieve those goals, they said.

These factors make a significant difference in the forecasts. Slower movement toward those goals would result in a global population of 13.6 billion and still rising in 2100, the researchers found, while the pace required to fully meet the SDGs by 2100 would see the world's population peak in 2046 and fall to 6.29 billion by the end of the century as fertility rates plummet.

The differences are less stark in Canada, where migration is expected to have a much larger impact than global fertility patterns on population trends. The study forecasts that with slower progress toward SDGs, Canada's population would peak in 2086 at just over 46.1 million – less than one million more than the projection based on the current pace. Meeting the SDGs by 2100 would have a bigger impact, with the population peaking around 42 million in the mid-2050s and dropping to 37 million by 2100.

The researchers say these large variations show the effect political policies can have on long-term population and economic outcomes.

"Understanding potential patterns in future population levels is crucial for anticipating and planning for changing age structures, resource and health-care needs, and environmental and economic landscapes," they wrote.

Other highlights from the study's projections of the world in 2100 include: