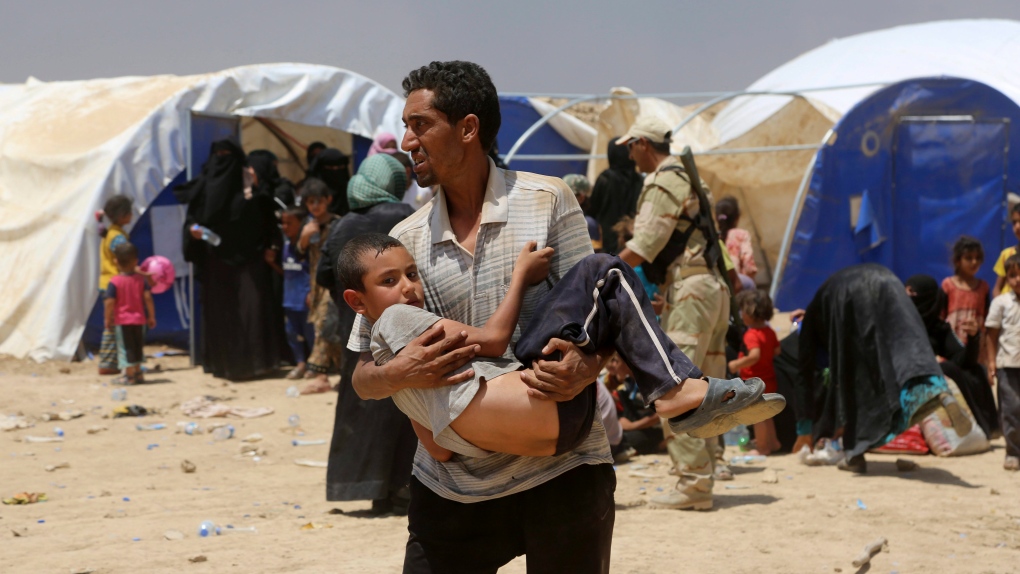 Displaced civilians who fled their Islamic State-held towns and villages south of Mosul during fight between Iraqi security forces and Islamic State militants, arrive to a camp for displaced outside Irbil, Iraq, on Friday, July 15, 2016. (AP Photo)

OTTAWA -- Canada will open its wallet to help Iraq's shattered economy when it co-hosts a major meeting in Washington on Wednesday to discuss the Middle East country's current and long-term needs.

Officials from 24 nations are expected to attend the Iraq pledging conference, which aims to raise more than $2 billion for humanitarian aid in the country, as well as for de-mining efforts and long-term stability.

Up to $200-million of that will come from Canada, the government announced on Tuesday.

The U.S. and Canada are co-hosting the event with Germany, Japan, and the Netherlands, and the focus will be less on fighting the Islamic State of Iraq and the Levant and more on starting Baghdad down the road to recovery. A second meeting on the fight against ISIL will be held in Washington on Thursday.

Canada's $200-million pledge will go to the World Bank to help the Iraqi government with economic reforms. The money, which will end up as a loan, is in addition to $1.6 billion the government committed to the region over three years in February as part of its reconfigured mission against ISIL.

The Middle East country's economy has been battered over the past two years thanks to the war against ISIL as well as the plummeting price of oil. Corruption and a weak central government have added to the country's woes.

But while Canada's new money will be directed toward Iraq's long-term economic success, much of Wednesday's meeting is expected to focus on the country's immediate needs.

In particular, U.S. officials said this week that a severe funding shortfall had caused the United Nations to close health programs and other services for the 3.3 million Iraqis forced from their homes by ISIL. The officials said the international community had delivered only 38 per cent of the $861 million needed.

That shortfall has taken on a new sense of urgency with the planned liberation of Mosul, Iraq's second-largest city, which has been under ISIL control since June 2014. The liberation of Fallujah last month was described as a humanitarian disaster, as fleeing Iraqis overwhelmed nearby camps and aid services.

Dion, who will represent Canada at Wednesday's meeting, will announce that Canada is directing an additional $150 million in previously announced funding toward humanitarian needs. However, an official could not say how much of that would end up going toward the UN's emergency appeal.

An additional $8 million will be evenly split between de-mining and returning Iraqis to their homes.

Bessma Momani, a Middle East expert at the University of Waterloo, said improving governance in Iraq and laying the foundation for economic growth is essential to address the root problems that led to the rise of ISIL. Such assistance is long overdue, she added.

"Initially this was viewed as simply a military operation," she said of the international community's fight against ISIL. "But you can't just cut out the cancer. We should have been investing in this years ago."

Yet she also warned that progress will take a long time, and the prospects for Iraqi prosperity are not guaranteed.