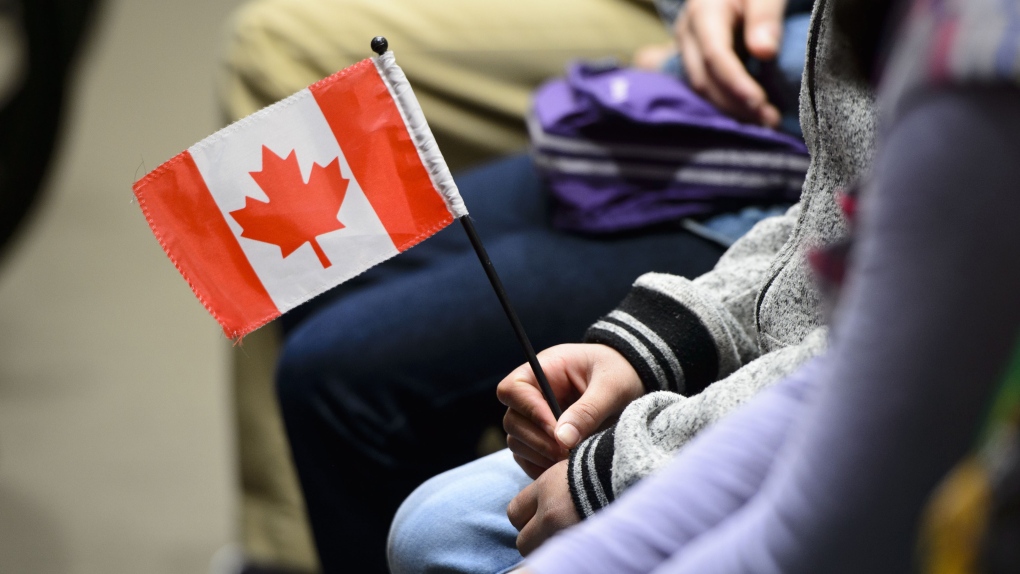 A young new Canadian holds a flag as she takes part in a citizenship ceremony on Parliament Hill in Ottawa on April 17, 2019. Within the span of just a few minutes, an online tool from Statistics Canada offers an evocative snapshot of Canada's ever-shifting population through a series of demographic models.THE CANADIAN PRESS/Sean Kilpatrick

A Quebecer moves to the Northwest Territories, a family in Newfoundland and Labrador welcomes a new arrival, another in British Columbia mourns a loss, an immigrant settles somewhere in Ontario.

Within the span of just a few minutes, an online tool from Statistics Canada offers an evocative snapshot of the country's ever-shifting population through a series of statistically modelled demographic events.

Watching it is somewhat akin to playing a real-life, nationwide version of the city-building video game SimCity: coloured bars representing births, deaths and various migrations slowly fill up or deplete, leading to animations on a map showing each occurrence playing out across the country.

It's not quite true to life, of course -- the federal government doesn't claim to be tracking every individual in the country in real-time -- but one of the page's main designers says it's pretty close.

Patrick Charbonneau, a senior analyst with StatCan's demography division, says the model is based on the agency's latest population estimates, which are updated every three months.

"The counts that are shown in the population clock are strictly for visualization purposes, to give Canadians a sense of how fast the population is changing. It's more of a learning tool than a decision-making tool," said Charbonneau.

"But those numbers are still obtained through really robust methodology nevertheless."

Charbonneau said the agency launched the clock in an effort to increase "statistical literacy" in the general population -- particularly among young Canadians -- and to give people a sense of how the population is changing.

"I think it's something that everyone should be able to know -- how fast the population is changing ... What is the rhythm? What is the pace?" said Charbonneau.

He said the clock has proven popular in its first year, becoming one of the most-visited pages on StatCan's website. He said he's also heard accounts from teachers who have shown it in their classrooms to introduce students to population studies.

Howard Ramos, a professor of sociology at Dalhousie University, said it's important for Canadians to maintain a life-long interest in the demographic trends that continue to shape the country.

"I think that a lot of Canadians would even be surprised by the overall population -- we're now at 37 and a half million people. I think a lot of people's notion of how big we are or how populated we are is often frozen by what they got in high school social studies," he said.

Ramos urged Canadians to check out the tool for themselves, and if they find it interesting, to "dig into" the vast amount of data available on Statistics Canada's website.

"This is a great way for us to get to know who we are," he said.

"If you live only in Toronto, Vancouver or Montreal, you might not know what it's like to live in the Yukon, or in Cape Breton, or in the Prairies. And these kinds of tools allow us to begin to see what those places look like, and begin to imagine them."