Thousands of farm animals are transported across Canada every week. But the conditions they experience are regulated by rules that are decades old, and according to many, inhumane.

Canada's regulations governing the transportation of farmed animals date back to 1975. They currently allow for cattle to be in transit for 52 hours without access to food or water, while the maximum for pigs and chickens is 36 hours.

Krista Hiddema, managing director of Mercy for Animals Canada, says these regulations fall well below the standards of other countries.

"Our transportation regulations in Canada are the worst in the Western world," said Hiddema.

"Animals are often transported thousands of kilometres without any food, water, shelter or any protection from the elements."

And these conditions appear to be taking their toll. The Canadian Food Inspection Agency says between two and three million animals die during transport every year.

"They are also not protected from the elements, so there is no minimum temperature in Canada below which it is illegal to transport animals," said Thurston.

Canada's laws stand in contrast to those of other Western nations, many of which detail stricter conditions for transporation. 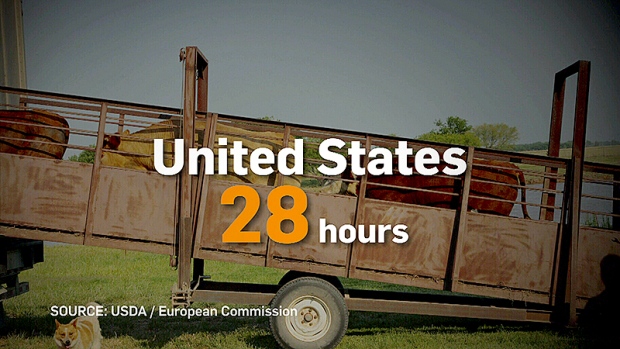 In the United States, livestock can only be on a truck for 28 hours, at which point they must be off-loaded and rested.

And in Europe, animals such as sheep and cattle can be in transit for 14 hours before they need to be rested and given water, while pigs don’t have to be off-loaded for 24 hours if they have access to water at all times. 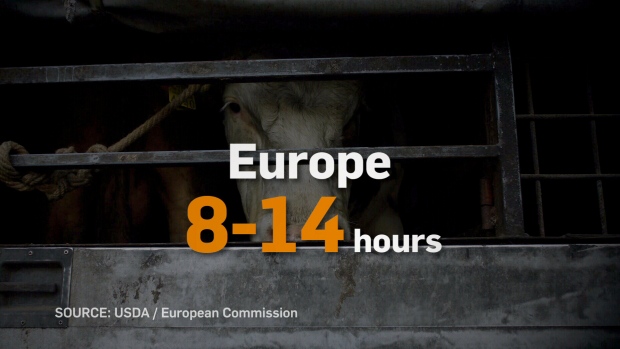 "They seem to understand better the conditions animals need, which we do not seem to relate to in Canada," said Stephanie Brown, director of Canadian Coalition for Farm Animals.

Here's a list of other regions' regulations concerning the transportation of farmed animals:

And it isn't only animal rights activists who are rallying to change the regulations in Canada.

Montreal-based dairy company Saputo and organizations like the Dairy Farmers of Canada are also calling for change.

"It is an important issue that we all share with responsibility to ensuring animals receive the proper care," said Graham Lloyd, direct of communications for the Dairy Farmers of Canada.

"Maple Leaf has and continues to voice the need to enhance current federal livestock transportation regulations. We look forward to working with the new federal government to address this critical area of animal welfare," Greg Douglas, vice-president of the company's animal care division told CTV News in an email.

Several petitions have also been launched calling on the federal government to enact changes.

And Canadians appear to support reform to the country's rules governing the transportation of farmed animals, according to a study funded by Mercy for Animals.

The non-profit group contracted NRG Research Group to handle the study. A total of 1,002 interviews were conducted over the phone with Canadians across the country last October, with a margin of error of plus or minus 3.1 percentage points, 19 times out of 20.

According to its findings, 97 per cent of Canadians said it is important for animals to be transported in a humane manner that addresses their basic needs.

A further 90 per cent said they supported the introduction of new regulations to improve protections for farmed animals during transport.

Ninety-five per cent of those surveyed also said it was important to ensure that animals are protected from weather extremes, and provided with basic food, water and rest during transportation, even if that came at a higher cost for livestock producers and transportation companies.

The survey also offered participants five possible regulatory changes all of which received "strong support," including:

The minister of agriculture wasn't available for comment on Wednesday, but the agency says it is working to amend the regulations.

It didn't specify when any improvements would be made public.

With a report from CTV's B.C. Bureau Chief Melanie Nagy