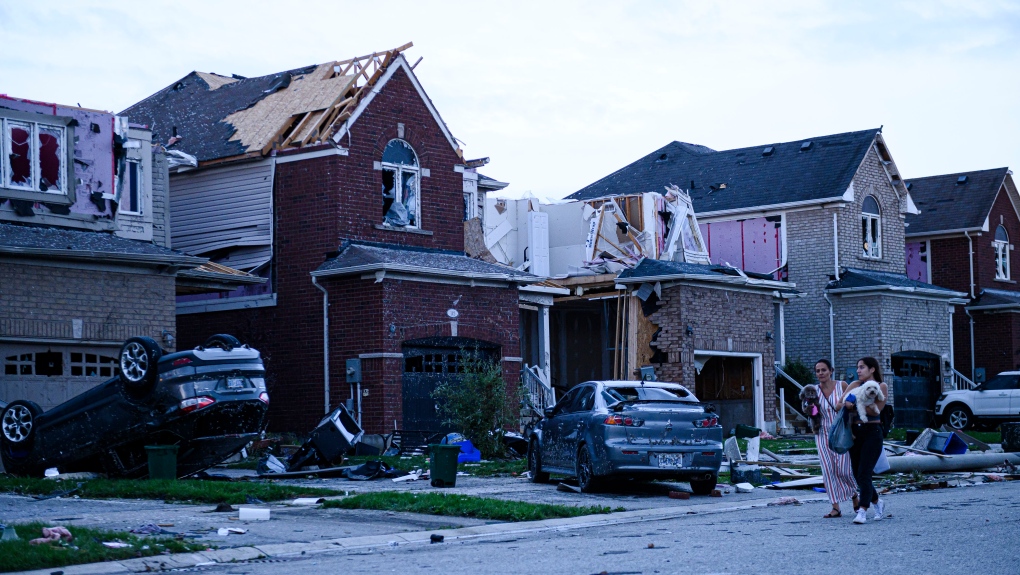 Residents leave their homes after a tornado caused significant damage, in Barrie, Ont., on Thursday, July 15, 2021. THE CANADIAN PRESS/Christopher Katsarov

TORONTO -- In the wake of a devastating tornado that displaced more than 100 residents in southern Ontario earlier this month, engineering experts are calling for Canada’s building codes to be updated to include more protections against the natural disasters.

Greg Kopp, a lead researcher for Northern Tornadoes Project and the ImpactWX chair in severe storms engineering, surveyed the damage in Barrie, Ont. after an EF-2 tornado tore through a residential neighbourhood there on July 15.

“There’s many roofs off of houses, some walls collapsed. At least one house, the first storey collapsed and the second floor came down on top of it. So it was pretty significant,” he told CTVNews.ca during a telephone interview from London, Ont. on Friday.

The civil and environmental engineering professor at Western University said the destruction seen in Barrie, which left at least 70 homes uninhabitable, is partly because builders across Canada don’t focus on protecting against tornadoes, specifically.

Girma Bitsuamlak, a civil and environmental engineering professor and director of wind engineering facilities at the WindEEE Research Institute at Western University, said this needs to change because he has noticed more tornadoes occurring in more densely populated areas of the country.

However, he said there haven’t been as many deaths from tornadoes in Canada compared to in the United States, for instance, because of the inclusion of basements in many homes.

“We are lucky in Canada, the majority of our homes have basements,” he said.

Kopp said it’s important to focus on how the roof is secured to the walls in the event of a tornado.

“I think most people think about a well-built house as strong walls and a roof that doesn't collapse on you.”

“In Canada, we have lots of snow, obviously, and so the roof needs to be strong to hold up that snow and that actually makes the roof quite strong for tornadoes, but when the wind blows over the roof, it wants to lift it up. So you have to hold the roof down.”

To do that, Kopp said hurricane straps should be installed in every home in Canada to prevent roofs from blowing off during a tornado. He said the thin pieces of metal, which are nailed to each truss and to the top of a wall, ensure the roof is fastened to the walls during storms as strong as an EF-2 tornado.

What’s more, Kopp said the straps are inexpensive – costing a maximum of $60 to $80 for a single house. And while they may add “a little bit of time” to construction, he said it’s minimal.

“I think it’s a life safety issue,” he said. “When you’re losing a major structural component of a roof, it becomes really a significant life safety issue and the building code is all about that. And so, for the relatively low cost, I think there’s a really strong benefit for that.”

Kopp said he has worked with the Institute for Catastrophic Loss Reduction (ICLR), an independent, not-for-profit research institute affiliated with Western University, to propose the addition of hurricane straps in the National Building Code of Canada on three separate occasions, but their requests have been denied.

The researcher said he understands why builders may be opposed to mandating hurricane straps in construction.

“They oppose things that cost more money and they want to make houses as inexpensively as possible. So I think that's good for Canadians, but I think we also have to balance that with safety measures,” he said.

According to a spokesperson for the National Research Council’s Codes Canada, the National Building Code of Canada (NBC) has “requirements for resistance to wind loads; however, it does not explicitly address tornado wind forces.”

In a statement to CTVNews.ca, the spokesperson said the Canadian Commission on Building and Fire codes is developing updated provisions for resistance to “lateral loads, including wind,” in houses and small buildings.

The NRC further explained that under the NBC, all structures are to be designed to withstand the forces caused by the “strongest wind likely at that location in a 50 year return period,” according to weather observations and analysis by Environment and Climate Change Canada.

“A change currently proposed for the next edition of the National Building Code of Canada (expected to be published in December 2021), would update this wind data,” the statement read.

The NRC also noted that provinces and territories regulate the design and construction of new houses and buildings in Canada and the enforcement of the codes is under their jurisdiction.

In Ontario, for example, a spokesperson for the Ministry of Municipal Affairs and Housing said the province’s building code sets “robust standards that must be met when it comes to the construction of houses. This includes requirements for ensuring the walls and roof of a house are secure.”

The spokesperson said the code includes “provisions requiring roof structures on buildings to be attached to the supporting walls so that they can resist being pulled up due to high winds. This includes requiring a specific number of nails to secure roofs to the walls of a house.”

In Alberta, a Municipal Affairs spokesperson said they haven’t seen any “significant concerns with the current building code requirements, which already include construction mitigations for tornado protection.”

In Saskatchewan, which, like Ontario and Alberta, sees a higher number of tornadoes each year, a spokesperson said the province follows the guidance outlined in the national building code.

“With respect to roof systems and anchorage to walls, “hurricane strap type” fasteners would be required where the 1 in 50 hourly wind pressure is equal or greater than 0.8 kPa (kilopascals). Based on the meteorological information provided in the NBC and specific to building design, none of the 31 Saskatchewan locations identified in the NBC exceed the 0.8 kPa.”

And while the province isn’t currently looking into adding these measures, the spokesperson said building owners are “always supported when they choose to build over and above the minimum requirements of the NBC.”

Kopp agreed that building codes are always about minimum standards and that owners can always do more to enhance the safety of their homes.

“If we use hurricane straps, you can easily inspect, and the builders can easily see that it's there,” he said. “It’s going to make these houses much more resilient. So I think it’s something we should be doing.”

Bitsuamlak added that it’s important to continuously reinforce the code to make it more resilient, particularly in light of a changing climate, which he believes is contributing to an increase in tornadoes in certain areas.

“I'm not climate change expert, but I see it in my eyes, the events are becoming more recurring. So, there are cost effective ways, especially for new construction,” he said. “We need to do a better job in protecting our homes from tornadoes.”