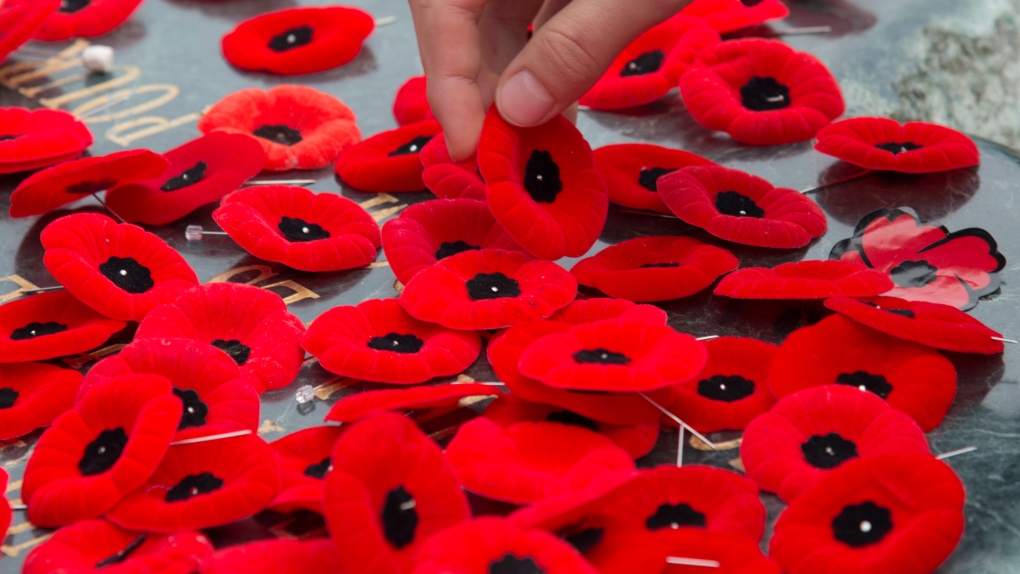 A poppy is laid during a maritime Remembrance Day ceremony in Burrard Inlet in North Vancouver, B.C., Monday, November, 11, 2019. THE CANADIAN PRESS/Jonathan Hayward

TORONTO -- This Remembrance Day will look drastically different because of the pandemic. While many annual events and ceremonies across the country have been cancelled, some provinces are finding new ways to commemorate this significant day.

Here is a look at what Remembrance Day events have been cancelled and what online alternatives Canadians can participate in:

The Royal Canadian Legion of Newfoundland and Labrador said the annual Remembrance Day parade is cancelled this year due to the pandemic. Instead the city is advising residents to observe a moment of silence in their own homes.

The ceremony held annually in the nation’s capitol will still proceed however there is a maximum of 100 people allowed to gather. The attendees allowed within the perimeter of the National War Memorial will mainly consist of government officials and police, so those not directly involved with the ceremony will not be able to get close to the ceremony because of the physical distancing measures. According to the Royal Canadian Legion website, specters are “discouraged” from gathering in person. Canadians are invited to view the livestream instead that will be available on The Royal Canadian Legion Facebook page.

The city of Toronto has cancelled all in-person Remembrance Day events, but residents can still participate online by viewing the various virtual ceremonies that will be livestreamed through the city’s website all throughout Nov. 5 – 11.

The annual ceremony held at the Whitehorse Cenotaph near city hall will be carried live on the Royal Canadian Whitehorse Legion Facebook page.​

Though Regina’s largest ceremony at the Evraz Place has been cancelled, a smaller ceremony will be held in Victoria Park which residents can view through a livestream available on CTVNewsRegina.ca.

The Hanger Flight Museum, in collaboration with CTV Calgary, will provide a live broadcast of a morning service in honour of Remembrance. The ceremony will be livestreamed on CTVCalgary.ca.

The city’s largest Remembrance Day ceremony at the University of Alberta is cancelled this year. However, the Royal Canadian Legion said various smaller local ceremonies will be held instead where residents can participate without risk of transmission.

The University of British Columbia will be live streaming a broadcast from the War Memorial Gym where multiple speakers will be invited to lead the ceremony. The ceremony will include the laying of the wreath, moment of silence and musical performances.