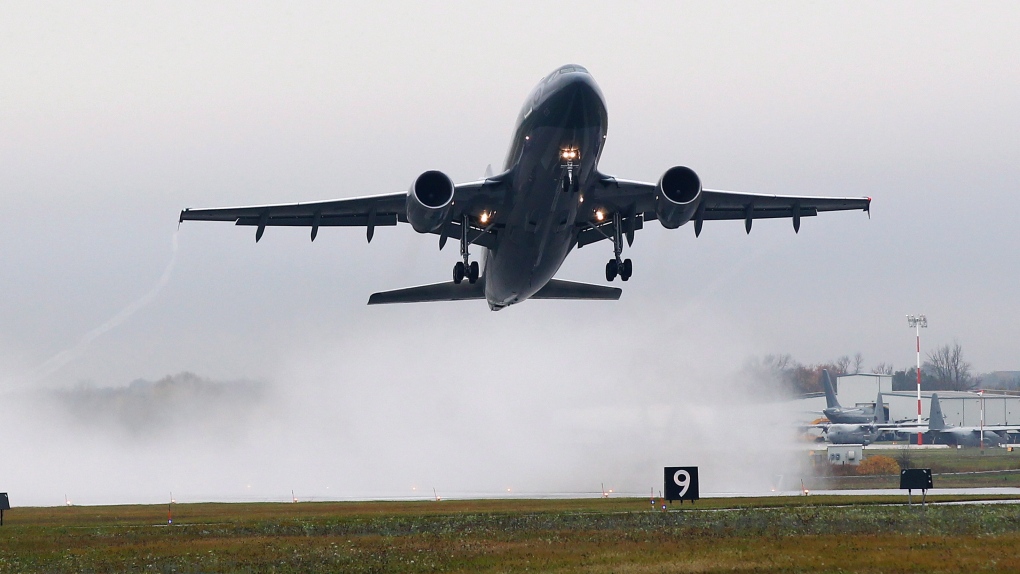 An Airbus CC-150 Polaris takes-off from CFB Trenton carrying 115 members of the Canadian forces to Kuwait, in Trenton, Ont., on Thursday, Oct. 16, 2014. The advance group is responsible for initiating preparations for the Canadian forces units that will deploy in Operation IMPACT in Kuwait and help fight ISIS. THE CANADIAN PRESS/Lars Hagberg

OTTAWA -- Coalition warplanes will no longer turn to the Canadian military for mid-air fill ups over Iraq and Syria.

The Canadian Forces will bring home its Polaris air-to-air refuelling plane on Saturday, bringing a close to one of Canada's longest contributions to the war against the Islamic State of Iraq and the Levant.

The first Polaris refueller arrived in Kuwait to begin supporting anti-ISIS missions over Iraq -- and later Syria -- in October 2014, as the international community scrambled to counter the extremist group's spread.

The decision to withdraw the aircraft was made in consultation with allies and based on a combination of factors, said Rear Admiral Brian Santarpia, chief of staff for operations for the Canadian Joint Operations Command.

Those factors include the shifting nature of Canada's role in the U.S.-led coalition against ISIS, which has moved away from supporting direct military action against the group and toward training Iraqi security forces.

It also coincided with a decrease in the number of airstrikes and other coalition missions over Syria and Iraq, said Santarpia, as ISIS has lost nearly all of its ground in both countries.

"Based on the changing nature of the mission as (ISIS) has lost territory and as we've constrained it ... the kind of operations we're doing are less air-centric and more training based now," he said.

Figures published by the U.S. military last year showed the coalition conducted an average of 720 air-to-air refuelling missions per month in 2018, which was one-third fewer than the previous two years.

The number of airstrikes conducted by coalition aircraft saw similar decline, though reports had indicated a slight uptick over the past month or so in eastern Syria.

Despite the Polaris's departure, Canada continues to have a sizable presence in the fight against ISIS with two Hercules transport planes, medical personnel, more than 250 trainers and dozens of special-forces soldiers.

The mandate for some parts of Canada's mission is set to expire at the end of March, and the government has yet to indicate whether it plans to extend or otherwise change the operation.

The mission has largely fallen off the political radar over the past year as ISIS has been pushed back and the Canadian military has turned its attention to a peacekeeping mission in Mali.

But defence chief Gen. Jonathan Vance revealed in early December that Canadian special-forces soldiers had been working with Iraqi security forces as the Iraqis hunt down ISIS fighters left over from earlier battles.

Santarpia could not comment on that part of the mission; Canada's special-forces units report directly to Vance.

The Trudeau government came under criticism in 2017 after internal briefing notes obtained by the Conservatives showed Iraqi officials were unhappy with the Liberals' decision to withdraw six CF-18 fighter jets from the fight against ISIS.

The CF-18s had been committed by the Stephen Harper government at the same time as the Polaris in 2014, and the Liberals had claimed in public that their decision to remove the jets was understood and respected by Canada's allies.

Santarpia said that while the coalition would love to have all the military personnel and equipment that Canada can offer, "everybody understands that there's a limit to each country's capacity."

Canada's decision to withdraw the Polaris coincides with ongoing confusion in the region, after U.S. President Donald Trump's unexpected announcement last month that he planned to withdraw all American troops from Syria.

At the same time, a recent U.S. Defense Department report said while ISIS has lost nearly all the territory it once controlled in Iraq, it has started to dig roots as an "effective" insurgent group -- and that it could take "years, if not decades" before the Iraqi military can deal with the group.

Political, ethnic and religious divisions, as well as competing interests among various foreign actors such as the U.S. and Iran, have also posed significant challenges to stabilization and reconstruction in Iraq over the past year.