Critics are demanding to know why Canada Post didn't consult more with average Canadians before announcing its decision to phase out door-to-door mail delivery in urban centres.

The announcement Wednesday that the Crown corporation would be switching from doorstep mail delivery in urban centres to one-stop drops at community mailboxes, was met with both surprise and anger by many Canadians.

Canada Post spokesperson Jon Hamilton defended the decision, saying that Canadians are simply not using the mail system as they once did, with Canada Post delivering 1 billion fewer pieces in 2012 than in 2006.

He says if the corporation continues to lose money the way they have been, its losses are projected to hit $1 billion by 2020.

"So we went out to talk to Canadians. We sat down in 46 communities for face-to-face discussions," he told CTV's Canada AM from Ottawa.

And what they learned is that Canadians have different mail needs now and Canada Post needs to catch up, he said.

But NDP Transport Critic Olivia Chow is not convinced that those people who rely the most on door-to-door mail delivery were consulted, including seniors, the disabled, and those who are simply not using email or online bill-paying services.

"The consultation was done via the Internet, online," she said from Toronto. "The face-to-face meetings, those were by invitation only; they were not for ordinary Canadians."

Those with mobility issues still have a lot of questions about the new plan, Chow said, including whether the community boxes are going to be within walking distance of most homes.

"Are they going to have to drive there? What if you're a senior and you don't have a car? What about all those problems? I don't think Canada Post really consulted," Chow said.

On Wednesday, Liberal leader Justin Trudeau also wondered whether Canada Post undertook an in-depth study before announcing the changes. Along with Chow, he wondered as well about the timing of the announcement, coming as it did one day after the House of Commons adjourned for its Christmas break.

Government House leader Peter Van Loan struck back at critics on Thursday. He compared them to the wealthy residents of Toronto’s Rosedale neighbourhood, who had complained about having to lug their trash to the curb, after garbage collectors stopped walking up their driveways due to spending cuts.

“I am reminded of a time when the city of Toronto was going through some rationalization and trying to figure out how to deliver services,” he said.

“The good people of Rosedale did not like the idea (that) no longer would the garbage man come up to the side of the house to take the garbage; it was going to have to be like it was for everybody else in the country, they would have to get it at the end of the driveway."

Fraser Institute economist Charles Lammam told Power Play Thursday that the action plan does little to address the “root cause” of the problem.

To do so, he said, the government should privatize postal service in Canada and open it up to competition. He suggested the move has resulted in improved service and low-cost delivery in countries like New Zealand, Austria and the Netherlands.

“It may be delivered differently, stamp prices may decline as a result, there may be quality improvements, there may be innovations, we may be getting mail on time more often,” Lamman said. “This is the evidence that’s been found across the globe, really, when postal services were deregulated.”

Among the other changes Canada Post announced Wednesday was a hike in the price of a single stamp for a standard letter to $1, or 85 cents when purchased in booklets or coils. The change, which is set to take effect on March 31, 2014, is up significantly from the current 63 cents per letter.

Canadians hoping to stock up on stamps ahead of March will find themselves disappointed: Canada Post has suspended the sale of permanent stamps.

Posters have gone up in post offices around the country announcing the news, which was outlined in the Crown corporation’s five-point action plan, released Wednesday.

People who have already purchased permanent stamps-- identified with the letter P in place of a cost -- will be able to continue using them. But Canada Post says the “sale of new Permanent or “P” stamps will be suspended until the transition is successfully completed.”

Hamilton says the decision to raise stamp prices is "a difficult one," but he said they had to strike the right balance between maintaining revenues and not hurting small businesses.

He added their consultation with small businesses revealed that most wanted five-day a week delivery to remain in place.

"So we've maintained five-day a week delivery, but we had to look at prices. And yes, prices are going up and we appreciate that that's going to have an impact, but it's a tiered-pricing structure so that the more you use, the less you'll pay," he said.

Canada Post is also planning to cut between 6,000 and 8,000 positions over the next few years, though most of that workforce reduction will come through attrition, as nearly 15,000 employees retire or leave the company.

Altogether, Canada Post says four of the five initiatives announced Wednesday will lead to savings of between $700 million and $900 million annually.

Chow says the problem with the five-point plan is that nowhere does it explain what new initiatives the corporation has for finding new sources of revenue.

"It was all about cutting jobs, cutting services, raising prices. That's not a way to run a business because that just puts Canada Post into a downward spiral, I'm afraid," Chow said.

She says the mail delivery services of other countries have seen some success with branching into other ventures, such as e-services, or financial services and Canada Post should be investigating those.

With a report from The Canadian Press 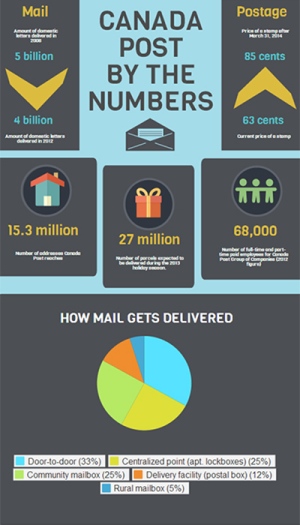