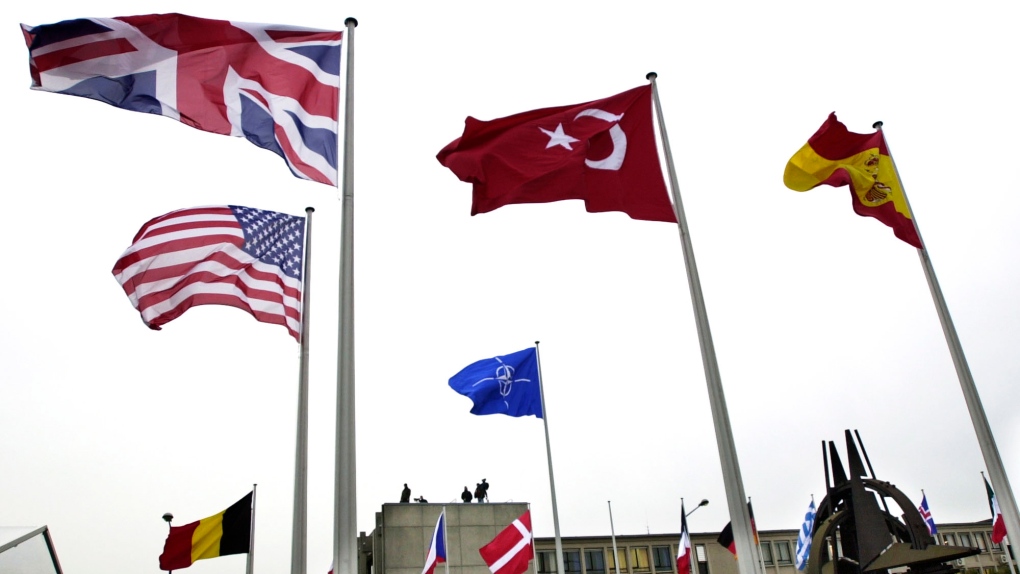 In this April 2, 2004, file photo, flags blow in the wind in front of NATO headquarters in Brussels. (AP /Virginia Mayo, File)

HALIFAX -- The head of NATO is urging Canada to be vigilant about the threat of Russian cyberwarfare both on the battlefield and at home.

NATO secretary general Jens Stoltenberg said Canadian troops in Latvia are being smeared by Russia-backed online propaganda aimed at undermining the alliance, and it may not be long before Canada sees similar tactics being waged within its borders.

Canada has sent hundreds of soldiers to Latvia to lead a NATO battle group as part of an effort to curb Russian aggression in the Baltic states, and Stoltenberg said Russia seems to be pushing back against the alliance with a digital disinformation campaign.

Russian-linked social media accounts have been spreading false or misleading stories about Canadian soldiers, according to Stoltenberg, such as posts accusing them of bad behaviour or living on Latvia's dime.

"We don't believe that the way to respond to propaganda is by countering propaganda with propaganda," Stoltenberg said in an interview on Saturday. "It is by providing facts, because we believe the truth will prevail."

Canadian Defence Minister Harjit Sajjan said on Sunday that information warfare has long been a tool in global conflict, but the internet has given these disruption tactics a broader reach.

"These are types of things that were happening before there really was a social media," Sajjan told reporters at the Halifax International Security Forum. "This is not new. This is a platform to elevate it for negative purposes."

He said Canadian soldiers in Latvia are countering these online attacks by setting a positive example on the ground.

"The best way to defuse any type of fake news is to actually go reach out to the community," Sajjan said. "Canadians are always going to do what they do best: Go out and build relationships."

Stoltenberg said Russia's apparent efforts to foment anti-NATO sentiment in Latvia have been unsuccessful, with polls suggesting that regional support for the alliance remains strong.

But in an increasingly interconnected world, Stoltenberg said, countries must defend against foreign attempts to sway public opinion not only abroad but amongst their own citizens.

"There is no military operation today without a cyber element," he said. "We see that cyber is an area where there are constant attacks from states but also non-state actors."

Canada's electronic spy agency released a report in June looking at threats posed by cyberactivity in Canada and around the world in recent years.

The Communications Security Establishment found that cyberthreats to democratic processes are on the rise globally, and Canada will face the risk of cyberattacks during the next federal election in 2019.

Russia has been accused of making online attempts to influence elections in the U.S., France and Germany. President Donald Trump has said Russian President Vladimir Putin has denied any meddling.

Stoltenberg refused to speculate about whether Canada could face future election meddling.

Canadians should be on guard for digital deception, he said, because public awareness is one of the best defences against cyberthreats.

"Just to be aware of the possibility reduces the likelihood of a successful cyberattack," he said. "Everything that can shed light on the threat is actually reducing the threat."

NATO is encouraging all of its members to beef up their cybersecurity protocols, including fortifying their networks, sharing best practices and carrying out exercises together, Stoltenberg said.

But as the theatre of war shifts from the front lines to cyberspace, he said, digital attacks look to become more common and their effects potentially more far-reaching.

"In cyber, the threats and the challenges are constantly changing, so the way we responded yesterday is not a sufficient way to respond today," said Stoltenberg. "We have to change all the time, and Canada is part of that change. Part of that big adaptation of NATO."